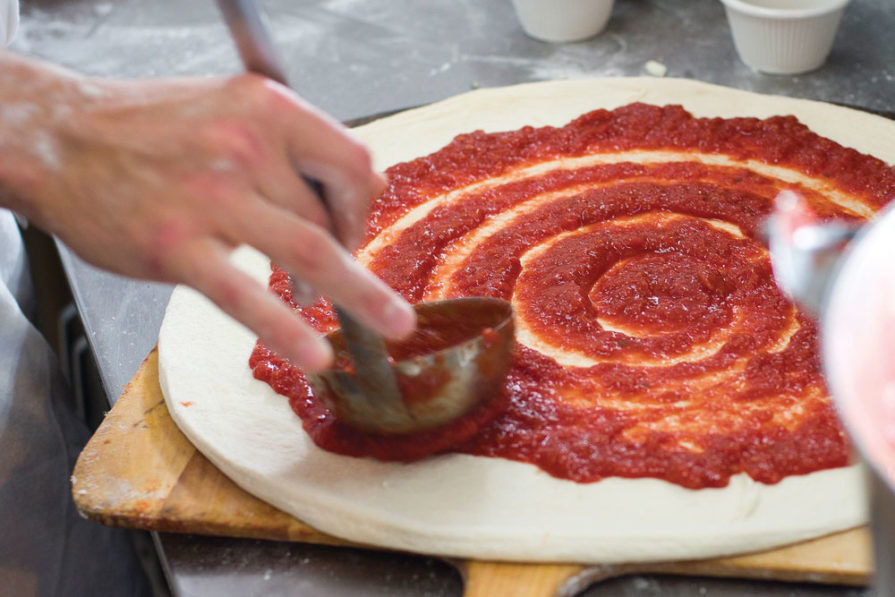 The sauce, as they say, is the boss. Whether topping pizza crusts baked to perfection, enshrouding the most superlative pastas or glazing the juiciest wings, the sauce is always the icing on the cake.

No matter how top-notch your other ingredients may be, the sauce can make or break a pizza. “A great sauce is part of your signature, so to speak, and we think it’s equally important as having a great crust,” says Anne Keller, co-owner of Hot Tomato Café (hottomatocafe.com) in Fruita, Colorado. “If the sauce is bland, that lack of flavor can cancel out so much of the taste you expect from the pizza. Sauce adds the zest to the pizza and imparts a characteristic that your toppings won’t quite create.”

“I think the sauce and crust are equally important,” agrees Scott Toth, chef and co-owner of Chicago’s Pizzeria Serio (pizzeriaserio.com). “A great pizza starts with a great crust, but with a great sauce you can turn even a mediocre crust into a great pizza. With the right combination, you’ll really have a winner.”

Getting a Head Start

According to PMQ’s 2012 Pizza Industry Census, more than 26% of respondents begin with a ready-made sauce and jazz it up to create a custom formulation. “We use a mix of pizza sauce, crushed tomatoes, spices and water for a mix that gives us a nice balance of zest and flavor,” Keller says. “Our advice would be twofold: First, using a good-quality tomato is critical; second, don’t be afraid to add spice.”

Toth also gets a head start with a prepared pizza sauce base and adds high-quality, whole, peeled plum tomatoes from a can, ground tomatoes and seasonings, including a little sugar, salt, basil and other spices. “I try to keep it simple and don’t overpower it,” he says. “I like to add bits of the tomato peel to give it more of a tomato flavor. If you’re starting with a good tomato, it’s going to have a lot of flavor and sweetness built in.”

According to Deb Crisan, senior vice president of sales and marketing for Rao’s Specialty Foods, an operator with limited time and staff should feel free to take advantage of a premium ready-to-serve sauce. “Not only does it save costs on preparation time and labor; the ingredients will always be consistent in flavor regardless of the season, making the chef’s creation foolproof.”

A basic premade sauce can be used over pasta, stromboli, calzones, fried calamari and lasagna, Crisan suggests. It can also be used as a finishing sauce for steaks, chicken, veal, pork and seafood. If you’re looking for something a little different, a ready-made vodka sauce lends variety to your menu—enhancing seafood, chicken and pasta dishes as well as brunch dishes such as quiche, frittatas and omelets.

Of course, some pizzeria operators still prefer to make their sauces the old-fashioned way. In fact, more than 56% of those who answered the Pizza Industry Census said they go the homemade route. Carlos Buscaglia, chef partner at Due Forni (dueforni.com) in Las Vegas, makes his sauce from scratch. “To create a great red sauce, I start by roasting white onions and carrots in the pizza oven to caramelize them. Once the vegetables are done, I sauté garlic and pork bones in a large pot until they are golden brown.” Next, he deglazes the mixture with white wine, adds tomatoes and simmers the sauce for five hours, seasoning with fresh basil, salt and pepper to taste.

Many pizzeria operators don’t cook their pizza sauces at all, believing that heating a tomato sauce decreases its fresh flavor or that it’s simply more trouble than it’s worth. “We used to cook it, but we realized it made no overwhelming difference at all,” says Doug Brandt, owner of Pie Hole Pizza Joint in Chicago. “It was an extra step, extra labor and extra dishes, with no really noticeable benefit.” Brandt adds his own blend of seasonings to a premade sauce and then lets it sit overnight. “In my mind, although cooking might help to marry the flavors, I would think it would also break down a lot of the natural sugars in the tomatoes,” he adds. “I’m sure there is a lot of science behind that, and some people might prefer the effects that cooking might have on a sauce, but I’m all for simple, productive and efficient preparation.”

But Domenico Crolla, owner of Bella Napoli (bellanapoliglasgow.com) in Glasgow, Scotland, slow-cooks his pizza sauce in the oven after preparing it with tomatoes, onions, garlic and spices. He prefers to hand-crush the tomatoes, he says. “I find that blitzing the tomatoes [in a blender] destroys their fresh red color, turning the sauce orange, and the taste of the tomato is also altered. By not blitzing the tomato, its cell structure is maintained, allowing the water to remain in the tomato cells and not all over the pizza.”

Meanwhile, Crolla’s method of saucing a pizza may seem backward to some—he puts it on top of the cheese rather than spreading it on the crust and then adding the cheese. “This method has several advantages,” he explains. “In the absence of a bottom sauce layer, the cheese bonds to the dough during baking. This stops the cheese and toppings from being pulled off when you bite into the pizza. Less sauce helps maintain a crunchier base. The moisture in the sauce evaporates much more efficiently because it’s not trapped under a layer of cheese. It looks visually more appealing, and it uses less sauce.”

Crolla suggests applying sauce at room temperature instead of chilling it, as cold sauce makes for a layer of partly uncooked dough. He recommends filling several bottles in advance so that, when one is finished, it can be put aside for cleaning; never top off a dirty bottle or bowl with fresh sauce, as this encourages spoilage, he advises. “There will be readers out there that are horrified at me suggesting putting sauce on top of the cheese, but I think it’s time to accept that this is an evolution—not a revolution—in the pizza kitchen.”

While red sauce remains the go-to flavor for pizzas and pastas, many exciting alternatives can enhance a pizzeria’s menu offerings. “We like giving our customers options when it comes to flavor, and having different sauces is a great way to offer that variety,” Keller says. “Our pesto pizza is one of our best-sellers—outselling, at times, some of our red sauce pizzas. We’ve noticed that our customers’ tastes have gotten more sophisticated and adventurous, and now, when we introduce pizzas that use ‘out-there’ toppings or sauces—such as peaches, barbecue sauce or salsa, for example—they tend to generate quite a bit of buzz.”

White sauce, or béchamel, is one of the classic “mother” sauces from which most other sauces are derived. (Along with tomato, the other “mother” sauces include velouté, a light stock-and-roux mix; espagnole, a brown sauce; and hollandaise.) At its most basic, white sauce consists of just butter, flour and milk. The addition of cream makes a velvety sauce that goes well with chicken or fish dishes. Throw in some freshly grated Parmesan cheese, and you have Alfredo sauce. Any way you prepare it, white sauces provide a pleasing alternative to tomato-based sauce, with a creamy, rich texture and a neutral flavor profile that puts the focus on the pizza or pasta toppings.

Buscaglia, for example, makes a gourmet white sauce with black truffles and aged Parmesan cheese, both of which offer flavors that will stand out in any dish. “Some other unique sauces that are my favorites include foie gras and bufala ricotta crema, cream of butternut squash or a roasted mushroom demi-glace,” he says. “All of these sauces can work well on pizza or pasta dishes.”

The Ease of Cheese

Cheesy dishes—both comforting and indulgent—also have enjoyed increased popularity lately. Adding soft cheese to marinara sauce, for example, can create entirely new menu items. “Ricotta cheese takes on other flavors very well, so, by blending a tangy tomato sauce with it, you get a wonderful flavor,” says John Sottile, CEO of Lamagna Cheese Company in Verona, Pennsylvania. “People have been experiencing that combination in lasagna, but adding it to pasta dishes is a good check-builder and something new and exciting for operators.”

Sottile shares the secret to making a cheesy tomato sauce with the perfect creamy texture: Leave a bit of the hot water in which you boiled the pasta, and then simply add the tomato sauce and ricotta. “Chefs can then add their personal touch—extra Parmesan, Romano, garlic or Gorgonzola—and it becomes their own. A dish like this has a nice profit margin in it, better than a typical pasta and sauce.”

A Hint of Heat

Barbecue sauce adds a tangy zing to any recipe, notes David Rosen, pitmaster for Ubon’s Barbecue Sauce in Yazoo City, Mississippi. “The tang of the vinegar and the sweetness of the ketchup and brown sugar, along with the bite of hot sauce, peppers and bits of onion, add great depth of flavor to any pizza, entree or wings,” Rosen notes.

Barbecue pizzas now grace menus around the United States. Some attribute the pie’s origins to Coletta’s Restaurant (colettas.net) in post-WWII Memphis, Tennessee. Initially topped with pork, it’s typically made with chicken these days, and barbecue sauce takes the place of marinara. The sauce thickens and caramelizes slightly under the cheese, providing a lively, sweet, tangy counterbalance to savory meat, onions or nearly anything else you choose to put on this crowd-pleasing specialty pizza. “A great barbecue sauce should never overpower your food or have a pastelike consistency,” Rosen advises. “It should accentuate your food.”

For pizzerias that already serve Buffalo wings, barbecue wings make for an easy and popular addition to the menu. Rosen suggests simply frying or baking the wings, then rolling them in the sauce. “It makes your wings glisten while providing an unmistakable sweet, tangy, mildly spicy flavor. Your customers will lick their fingers clean.”

Another way to make barbecue sauce go further on your menu is to use it in another Southern favorite: comeback sauce. Much like ranch dressing, comeback sauce can be used on everything from salads to sandwiches to fried cheese sticks. Rosen suggests mixing your own comeback sauce, using equal parts bottled barbecue sauce and mayonnaise, for a creamy, tangy spread and dipping sauce for wings, vegetables and fries.

Garlic butter sauce also adds a finishing touch that can be indispensable in the pizzeria. Simply simmer quality butter and garlic cloves, and then add your choice of seasonings to make it your own original concoction. “We use garlic butter sauce on everything on our menu—pizzas, wings, calzones, appetizers and subs,” says Anthony Berghela, owner of Romo’s Pizza (romospizzany.com) in Glenmont, New York. “It has become our signature sauce. The fresh garlic gives it that extra kick.”

A great sauce can be transformed into more than one finished product and used in a variety of ways in a wide range of dishes. Expanding your selection of sauces will expand your menu selection without breaking the bank. So don’t be afraid to get saucy by experimenting with traditional sauces, adding your own creative touch and inventing new signature masterpieces unique to your pizzeria.