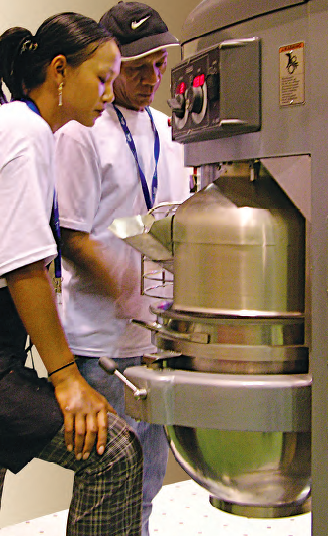 Before you can roll it, top it and bake it, you need to prepare enough dough to meet your customers’ demands. Keeping production on schedule starts by choosing a mixer that can handle all of your needs, in terms of both size and function. Three types of mixers are designed to handle large volumes of dense pizza dough: planetary, spiral and vertical cutter. Each offers its own unique benefits for your business.

Planetary mixers are the most common type of dough mixer in pizzerias. Named for the gears that help rotate the machine’s mixing tools around the bowl, planetaries are also a versatile option. They offer a variety of mixing tools and an attachment hub that can hold a meat grinder, cheese grater or vegetable shredder. “All of these attachments are very pertinent to a pizzeria,” says Simon Attias, president and owner of Attias Oven Corporation, New York. “And the planetary mixer tends to be more economical than other options.”

For dough mixing, planetaries offer two types of dough hooks—the J-hook and the spiral hook. “With a J-hook, the dough actually kneads itself in; it turns inward,” says Marcus Bramhall, CEO of Pizza Equipment Supply, Inc. (PESI) in Gastonia, North Carolina. “With a spiral, you’re corkscrewing the dough. The hook raises and drops the dough to blend all of the ingredients.”

Additional mixing tools include beaters and wire whips that can be used to blend sauces and whip creams. “Planetary mixers also offer a wide variety of speeds, which allows you to work with a variety of textures, including pizza dough, potatoes and sweet dough,” says Attias.

These mixers are sized according to the volume of the mixing bowl; planetary mixers are available from a 12-quart to 140-quart size, but the most popular sizes for pizzerias are the 40-, 60- or 80-quart.

To offer leeway for batch sizes, many manufacturers offer the option of choosing more than one bowl with your purchase. “You can buy a 40-quart bowl attachment for the 60-quart mixer, which allows you to make a smaller batch if you’re not sure what your business will be like in a given time period,” says David Berger, president, Cuppone America, Manteca, California.

Spiral mixers have one job in the kitchen: mixing dough. But what they lack in versatility, they make up for in speed and quality. “Spiral mixers are efficient and can generally handle more pounds of dough,” says Robert Drennan, national sales marketing and public relations director for Thunderbird Food Machinery in Dallas.

Unlike the planetary mixer, where the hooks rotate around the bowl, with a spiral mixer, the bowl rotates around the spiral dough hook. “This ensures that every point on the bowl is touched; it catches all of the flour and dough on the edge of the bowl for a better mix,” says J.P. Doyon, Canadian sales manager, Doyon Equipment Incorporated, Linière, Quebec, Canada. “And it takes about half the time of a planetary mixer to completely blend the same size batch.”

Spiral mixers tend to be more expensive than planetary mixers, but many experts believe the spiral helps create better quality dough, because the mixing action keeps temperatures low. “With a planetary mixer, a lot of dynamic forces are moving the gears and the mixer around the bowl,” says Berger. “The spiral is a very simple machine. You have a motor with a dough hook on it, and the hook is stationary. The product moves around it. Consequently, you have less agitation of the dough and less increase in temperature during the mixing process.”

Spiral mixers are sized according to fl our capacity (measured in either pounds or kilograms). They range in size from 30 pounds to 450 pounds. The smaller 30-pound size mixes roughly 50 pounds of dough, and the most popular sizes tend to be in the 100- to 200-pound range. Doyon recommends the spiral mixer to high-volume businesses that need to make large amounts of dough each day. But he does note that kitchens outfitted with spiral mixers often choose to purchase a smaller planetary, as well, “to mix sauces and prepare cheese and meats,” he says. 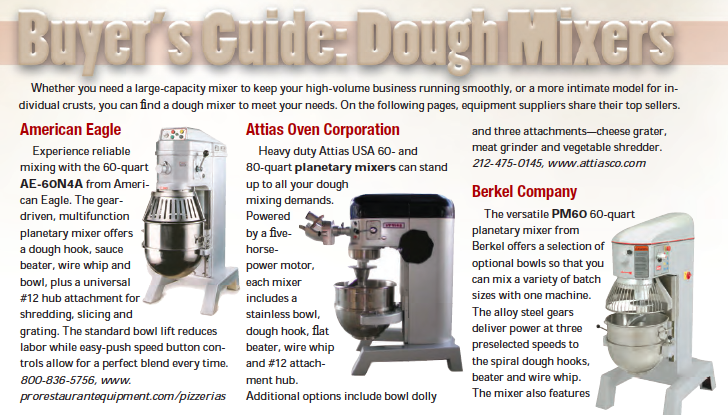 Vertical cutter mixers (VCM) resemble a giant food processor with spiraling blades and a lid that closes over the top during the mixing process. Like the planetary, these units offer versatility in the kitchen. “You can use your vertical cutter mixer for dough mixing, cheese and vegetable processing, and sauces,” says David Mouck, COO, Robot Coupe, Ridgeland, Mississippi. But what really sets VCMs apart from other units is their speed.

“Using a planetary mixer, it takes anywhere from 9 to 14 minutes to mix a batch of dough,” says Mouck. “With the VCM, the same process takes 45 to 90 seconds.” The mixer uses a system of blades—either two or three, depending on the size of machine—to both mix and cut ingredients. Manufacturers offer a variety of blades: sharp, perforated and dull. The sharp blades can be used for both cutting and mixing, while the dull blade is reserved strictly for mixing. “The setup of the blades is adjustable,” says Mouck. “You can use two blades or three, depending on the size of the batch. You can also change the configuration of the blades by moving them higher or lower in the bowl and by adjusting the space between each blade.” Vertical cutter mixers, like planetary mixers, are sized according to bowl volume, ranging from 15- to 60-quart.

Before you set out to make a purchase, you can narrow your options by determining the type of mixer that will work best for your business, and the minimum size you’ll need. Some of the key distinctions between these three mixers involve versatility and dough result. Planetary and vertical cutter mixers allow you to multitask with your equipment, using it for dough, sauce and toppings. The spiral mixer, while limited in function, is recognized as being very gentle on dough.

“If you want a nice, soft, easy-to-chew dough, you’re probably going to end up looking at a spiral, because it’s gentle on the dough,” says Bramhall. “If you need your product mixed fast, nothing quite matches the vertical cutter mixer, but it can be very abusive to dough.” According to Bramhall, some shops seek to counter the toughness that comes with the high heat and agitation of the cutter mixer by tweaking their dough recipes.

Once you’ve narrowed down the types of mixers you’d like to investigate, you can determine the best size by asking yourself three questions:

• How many of each size pizza do I normally make in one day?

• How much flour am I mixing each day?

“Flour comes in either 25- pound or 50- pound bags,” says Mark Altarac, president, Precision North America, Albany, New York. “You can make your life easier and cut down on measuring time by choosing a machine that can handle one of these two sizes.”

According to Attias, the 60-quart planetary mixer “is the most popular model for pizzerias because it can mix a 50-pound flour dough recipe.”

Some restaurants also choose to purchase a small mixer for their specialty batches, in addition to a large mixer for standard dough. “If you tend to mix in other flavors for a pesto dough or an organic dough, using a separate smaller mixer helps prevent flavor contamination,” says Berger.

Manufacturers and equipment distributors, such as Zesco Products in Indianapolis, offer a capacity chart for each model they offer. These charts break down the amount of flour and dough that each size and type of mixer can handle in one batch. “Once you’ve determined your budget and your needs, you want to go as big as you can afford,” says Berger. “This gives you room to grow and ensures you’re not overloading the mixer, which can lead to more frequent maintenance problems.”

Each type of mixer requires regular maintenance. To prevent breakdowns and the resulting interruptions in service, check your mixer’s user guide for proper maintenance schedules. “You also want to have your new equipment installed by a qualified electrician,” says Bramhall. “To keep everything running smoothly after installation, make sure you remove and clean the mixing hooks or shafts after every use.” If left to dry, remnants of dough can harden within the moving parts.

“Before making a purchase, think about all of the functions you’ll need your mixer to perform, and set your budget,” says Doyon. “This will help you narrow down the mixer or mixers that are right for your operation.”