The price is fixed: Toppers Pizza tests the waters with a new pricing model for unlimited toppings - PMQ Pizza Magazine 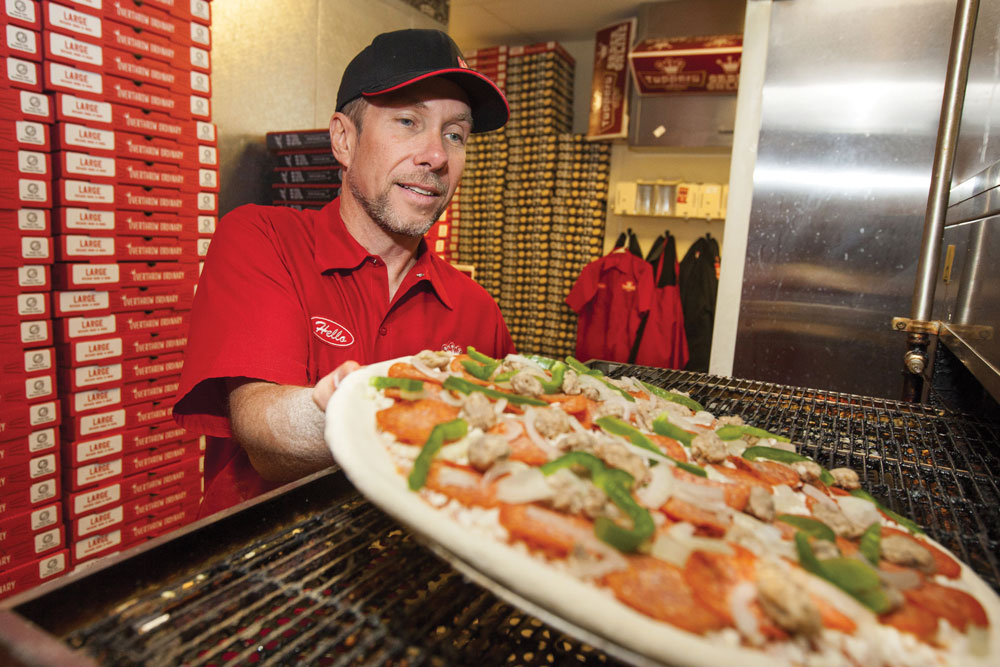 Last August, Whitewater, Wisconsin-based Toppers Pizza launched a “Straight-Up Pricing” model in all 76 of its stores. According to vice president of marketing Scott Iversen, any pizza with more than two toppings now costs the same, regardless of how many toppings a customer piles onto his pie—and Toppers offers 30-plus toppings to choose from.

When PMQ heard this news, we wanted to know how the unlimited-topping change affected Toppers’ food costs, what the brand’s franchisees thought, and if sales increased or decreased. Iverson answers all of our questions and more in this exclusive—and insightful—interview. Could your pizzeria be a candidate for fixed pricing, too?

PMQ: Why did Toppers decide to try a fixed price for unlimited toppings?

Scott Iversen: It was born out of the idea that customers want to be able to customize everything. If you look at the successes of the Chipotles of the world, guests are making their food their own creation. Pizza has always been a customizable food, but we have, as an industry, taught people that in order to customize it, we’re going to penalize you by charging you for every topping. We just wanted to make it very simple and say that Toppers is the place you could come and customize to your heart’s content for one price—straight up.

PMQ: Was this inspired by fast-casual pizzerias that use a similar pricing model?

Iversen: Yes, that was a place of inspiration. In many ways, we’ve been doing things that the fast-casual pizza players have done for a long time, such as offering unusual toppings like tater tots, macaroni and garlic-roasted tomatoes.

PMQ: How did online orders play into the menu change?

Iversen: We do about 50% of our transactions online and noticed that online consumers were customizing their pizzas even more than those calling in. Just like in a fast-casual environment when you walk down the line and tell them what you want, you do a similar thing online when you choose toppings. It’s much easier to create what you want when you aren’t restricted.

PMQ: How has your bottom line been affected now that customers can get unlimited toppings?

Iversen: It’s been great. Our transactions (since the pricing change) were up about 3% versus the prior year. Our order counts are up in a time when the entire restaurant industry is fighting for order counts.

PMQ: How have customers reacted?

Iversen: The change has improved the value perception for our customers. We’ve seen not only new customers, but current customers coming back more often. They’re reporting to us that they think the value is better because we’re unleashing them. We’re saying, “Do what you want,” and we’ve priced the menu so that it works.

“We studied this quite a bit and tried the unlimited toppings in a few test markets prior to launching it across the system. Our ideal food cost changed by about half a percent. Not significant.”
—Scott Iverson,  Toppers Pizza

PMQ: How has this pricing model affected your food cost?

Iversen: We studied this quite a bit and tried the unlimited toppings in a few test markets prior to launching it across the system. Our ideal food cost changed by about half a percent. Not significant.

PMQ: What’s the average number of toppings that customers order?

Iversen: Prior to the change, the average number of toppings per order was probably two to three. After the change, it increased to three to four. It didn’t change dramatically, but perception-wise, people think they’ll go ahead and add that extra topping they wouldn’t have before. It’s about giving the customer what they want and eliminating the feeling of being nickle-and-dimed.

PMQ: In the worst-case scenario, how many customers will pile on every topping?

Iversen: Well, you see it occasionally. Almost every single one of those is an online order. An order will pop up on the screen that has, like, 30 toppings. Of course, we did a lot of training with the team so they know how to reach out and help the customer understand that the pizza won’t cook with 30 toppings on it. When you really dig into the numbers, though, this happens less than 1% of the time.

PMQ: What was the franchisee reaction?

Iversen: We thought there would be more nervousness, but we had already tested it for six months and were able to show franchisees the impact on food costs and that it raised order counts, so they felt good about it.

Iversen: They did, but, for the most part, they went down. We intentionally lowered base menu prices at most locations as part of the “Straight-Up Pricing” launch to help improve our overall value perception. The average menu price decrease was by one dollar at most stores. Our overall food cost increased by only about .25%, mostly because, during the periods prior to the rollout of “Straight-Up Pricing,” we implemented some portioning changes in anticipation of customers increasing their average number of toppings. The net result was, our order counts were up significantly, our average check was down by an average of 65 cents, and food costs increased by .25% on average. All in all, the decrease in average check and increased food costs were more than offset by the number of increased orders. We are very excited about the momentum we’ve created for 2017.

PMQ: Have you found any other traditional pizzerias doing something similar?

Iversen: Not that we’ve found. A big reason we jumped on it is so we could be known as that pizza place that doesn’t charge for toppings. It’s working for fast-casual restaurants in that you get to personalize and customize, very simply, with a fixed price. Besides, we’re Toppers, and we’re all about toppings!