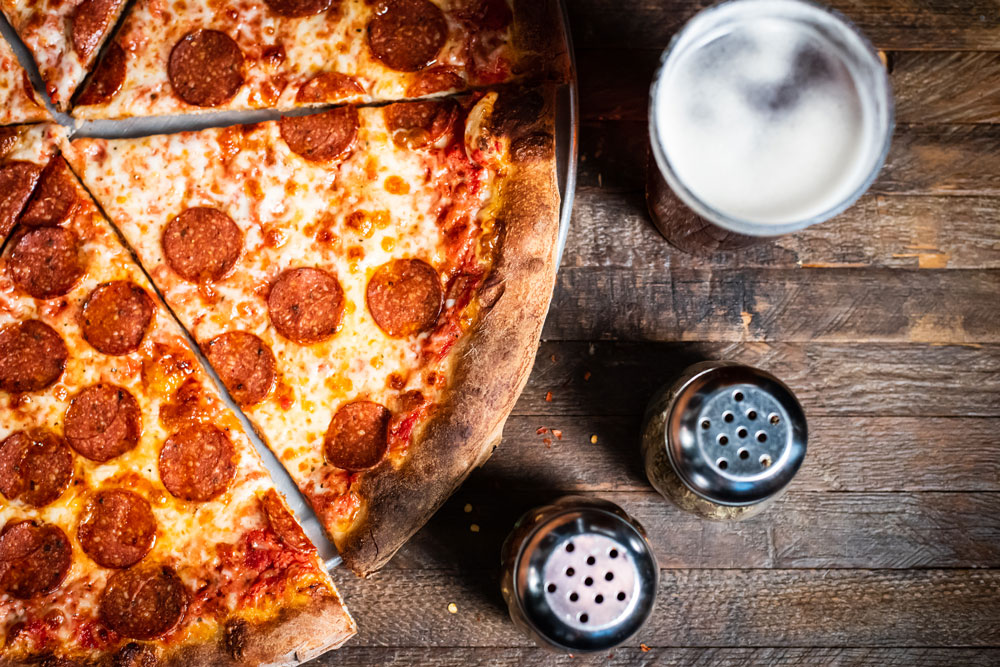 Related: Get all the latest news on vegan pizza products at PMQ’s sister site, PizzaVegan.com.

Plant-based sales are positively blooming, and by now, they’re less an of-the-moment trend and more a long-term shift in Americans’ eating habits. If you’re thinking of adding some plant-based proteins to the menu, take notes from these three brands that have incorporated them in thoughtful ways—and reaped hordes of new customers in the process. 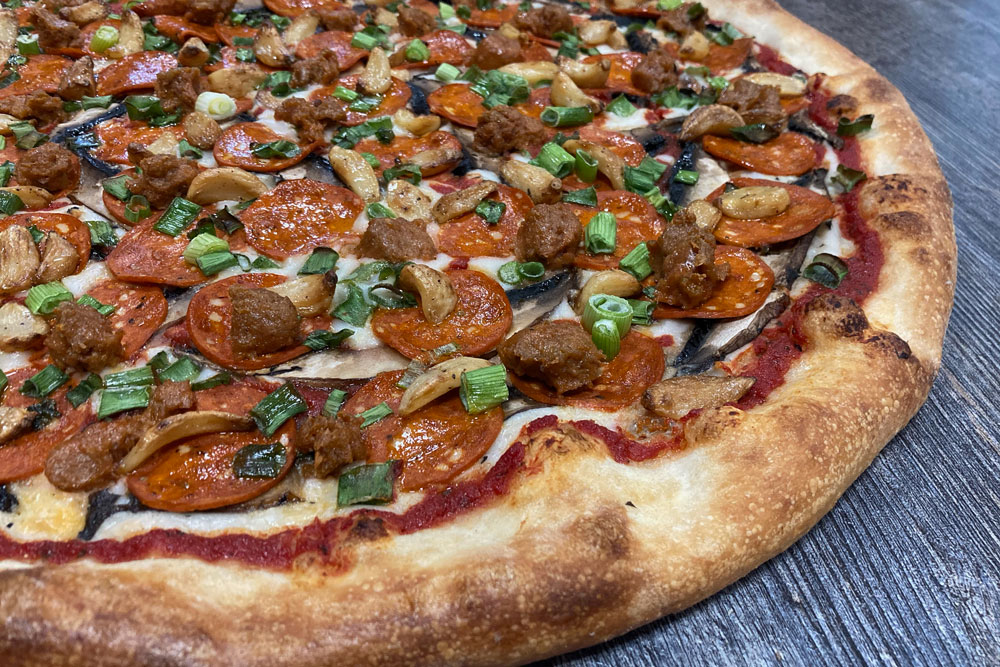 Marketing messages: Pizza My Heart donated 25% of net proceeds from all Miyoko’s-topped pies during one week to the Humane Society Silicon Valley and SPCA Santa Cruz. It also offered, for nearly one month, $5 off a large, $4 off a medium, or $3 off a small Vegan Sur pizza (featuring plant-based pepperoni), or any build-your-own pizza topped with the pepperoni. “We branded our line of vegan pizzas as PB Pizza and created some dedicated specialty pies,” adds Chuck Hammers, owner and president. “We’ve done a number of sampling and discount events, and we mention our vegan options frequently in our standard communications, including social media, email blasts and in-store merchandising.”

Meat matchmaking: Both Hammers and executive chef Spencer Glenn agree that flavor is the first consideration when picking a plant-based protein. “There’s been so much progress in the last few years with vegan products,” Hammers notes. “We found great products that matched our goals for flavor and being easy to work with. Our restaurants are busy, so we couldn’t have products that had special cooking requirements or slowed service down.”

“There’s been so much progress in the last few years with vegan products. We found great products that matched our goals for flavor and being easy to work with.”
— Chuck Hammers, Pizza My Heart

Customer response: Vegan toppings aren’t just for vegans anymore. “A much bigger audience is the people looking to add more plant-based options into their diet and mix things up,” Glenn notes. “We’re also seeing a substantial number of hybrid orders: vegetarians who are happy with dairy cheese but add a plant-based pepperoni, or lactose-intolerant customers who want the vegan cheese but still order traditional sausage, pepperoni or chicken.”

Pricing and profits: Vegan ingredients are priced the same as traditional ones, even though they cost more. “The gratitude from customers is worth the minor incremental cost—and we’ve also seen that most of our business for vegan products is incremental,” Hammers says. “Customers who previously wouldn’t have come to our restaurants now have become regulars. That’s a win for everyone.”

Words of wisdom: “Don’t just add a vegan cheese or topping to your menu and expect it to work,” Glenn advises. “Create some dedicated pizzas with interesting flavor profiles. There can be a mistaken impression that vegan means dull and flavorless. That’s no longer true, and we have a growing customer base who appreciate that. We recently entered our Mt. Diablo vegan pizza into a major pizza competition against traditional meat and dairy pizzas, and it did exceptionally well. When you make a pizza that tastes great, people will notice.” 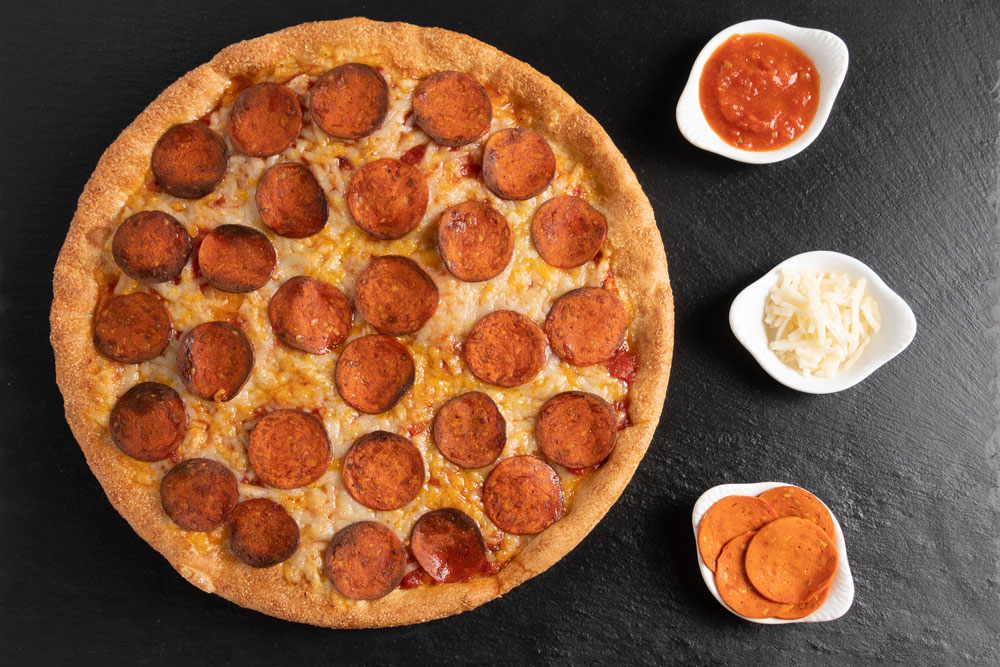 Marketing messages: Sarpino’s supplements vegans’ and vegetarians’ word-of-mouth marketing with email, SMS and internet search campaigns, plus social media posts and third-party platforms. “We worked with our partners to do a ‘Pepperoni Challenge Pizza’ at the beginning of the year, creating a pizza that was half plant-based pepperoni and half regular at a discounted price to let our customers try it,” says David Chatkin, president. “The response was very positive, with the pizza being in the top 10 sold during the promotion, and we saw a sustained increase in plant-based pepperoni topping add-ons from the regular menu.”

Meat matchmaking: Spurred on by a vegan customer’s request in 2019, the brand started to explore vegan and flexitarian food trends and brought Beyond Meat and Daiya cheese on board. “We saw how fast that market was growing and what a tremendous opportunity this was, so we decided to create an entirely vegan menu—not just small additions—to have the same vast variety as we do with our regular menu,” Chatkin recalls. “We tested a range of plant-based proteins and went with products that were high-quality, complemented our flavor profiles, and, most importantly, that our vegan customers would love.”

“We worked with our partners to do a ‘Pepperoni Challenge Pizza’…creating a pizza that was half plant-based pepperoni and half regular at a discounted price to let our customers try it.”
— David Chatkin, Sarpino’s USA

Pizza pairing: Before adding plant-based products, the Sarpino’s team spent months creating processes for streamlining cooking and preparation. “With our hyper-efficient operations design, we have a smaller staff than most, and we couldn’t overburden franchisees,” explains Scott Nelowet, director of franchise development. “We spent a lot of time experimenting, because vegan done poorly will hurt not just vegan sales but also the complementary sales that come along with them.”

Customer response: Vegan and vegetarian customers, tired of the afterthought offerings of others, appreciate the brand’s dedication to plant-based cuisine and bring their friends and family, who may or may not be vegan—helping to secure the brand’s recent $150,000 boost in average store sales. “The customer reaction has been overwhelmingly positive, and it has become a very loyal fan base,” Nelowet notes.

Pricing and profits: Plant-based proteins are slightly more expensive than traditional proteins, but the brand engaged in months of refinement to ensure it could offer plant-based at a significant profit. The company now recommends that franchisees do not charge more than $1 or $2 extra for the vegan items or raise the topping charge for plant-based proteins on the regular menu.

Words of wisdom: “Listen to what the vegan community is asking for! If you approach this in a disingenuous way, they will know it, and you will never recover,” Chatkin advises. “They know when restaurants don’t really care and are just in it for the money. Instead, take the time to create recipes and offerings specifically for this audience. And, as always, thoroughly train your staff on the new items, including how to handle items properly.” 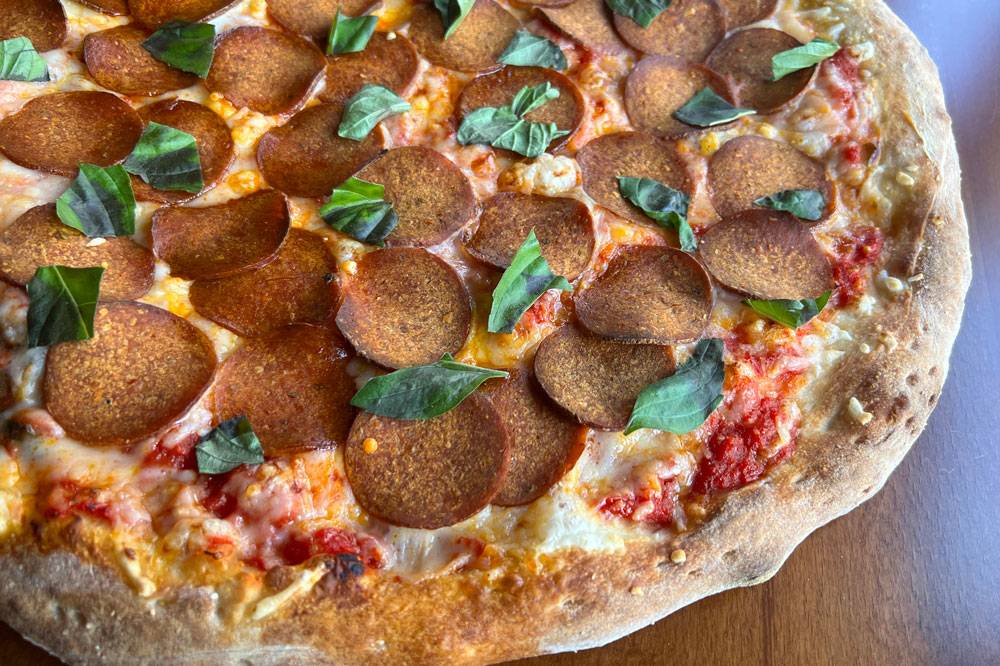 Marketing messages: Rubbing elbows with a Pittsburgh-area vegan group has helped spread the word organically, helping advertise new menu items as soon as they’re released. “They have a Facebook page with thousands of followers,” marvels Nick Bogacz, president. “They’ve been our best source of marketing, and we’ve now become a destination for these options.”

Meat matchmaking: At a trade show in London in 2019, Bogacz noted the plethora of plant-based ingredients—and how great they tasted. Back home, he believed he could attract the sizable vegan presence in Pittsburgh with items made just for them. Adding vegan cheese went over “phenomenally,” so when Hormel sent over samples of its Happy Little Plants pepperoni, the taste-testing began. “On staff, we have a couple of vegans, so they tried it—and the meat eaters did, too,” Bogacz remembers. “Everyone was surprised by the texture, taste and look. That’s what really stood out to me when we tried plant-based proteins: that they were actually really good!”

Pizza pairing: The Velma specialty pie is simple, featuring red sauce, basil, vegan pepperoni and vegan cheese. But Bogacz is considering adding more options to the menu, such as plant-based sausage and an Italian-style sub, done vegan, with the plant-based pepperoni. “The ingredients work just like the meat-based ones,” he says. “I think it’s a trend that’ll just keep growing.”

“What you often find is that the customer’s partner is vegan, and instead of ordering two separate pizzas, the nonvegan will try the plant-based pepperoni.”
— Nick Bogacz, Caliente Pizza & Draft House

Customer response: Hybrid families love the options at Caliente. “What you often find is that the customer’s partner is vegan, and instead of ordering two separate pizzas, the nonvegan will try the plant-based pepperoni,” Bogacz says. “We make sure to put the plant-based pepperoni on the opposite end of the make line, so the two pepperonis don’t get confused.” Vegan and vegetarian customers appreciate this extra care.

Pricing and profits: Caliente charges a premium-topping price for the plant-based meat, but interested customers are more than willing to shell out for it, as long as the quality is up to snuff.

Words of wisdom: “Definitely taste-test the plant-based proteins and have someone who’s vegan as part of the taste-testing crew,” Bogacz recommends. “Also, cook it! You want to see what it looks like fresh and after it’s been sitting in a pizza box for 10 minutes.”