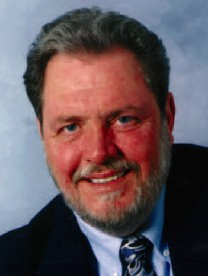 Every year the cost of doing business goes up. Every year you lose customers. Every year you need to create a marketing plan that adds to your customer base and increases your gross sales and net profit. This year is no different.

During one of my seminars in 2000, the audience and I got into a lively discussion about the fallout from the bottom line of restaurants that still offer free delivery. I'm not a visionary, but have lived through fuel prices escalating. The chain of events is predictable and needs to be revisited.

The first thing that will happen is your drivers will individually, or collectively, ask you for a raise to offset the new price of fuel. They aren't being greedy. Immediately, we are on the defense. Our brains are wired to stonewall requests for increases in expenses. We aren't being greedy either. We just have a very hard time parting with any monies that may be our take-home pay. The drivers have a very strong case. Their biggest expense has nearly doubled. The per delivery reimbursement that was fair last winter isn't cutting it today. It is probably costing them at least twenty bucks a week to deliver the same number of orders as it did six months ago. You have to make the call. Deny their requests and one of two things will happen. They will quit or find an illegal way to offset their losses. Both of these options spell bad news for you. Good, hard working, honest help is hard to find today.

How to Initiate Delivery Fees and Keep Customers

1. Educate your employees on how to deal with irate customers. Role-playing is an effective method.

2. Have delivery people do little things like bringing the paper to the door or offer simple tokens of appreciation such as peppermints or lollipops.

3. Train your employees to use lines like "In order to be fair with everybody" on the phone.

The next thing that will happen is deliveries will increase. Your customers won't waste the gas to drive in and pick up their orders. This is the time you need additional drivers not less.

What's wrong with this picture? We didn't create this problem. You know what your options are, but you're nervous. I was too. Here comes the silver bullet. I only write from experience, not theory, and here's my story.

Operation Desert Storm came blasting into my life in a personal way. Big Dave's Pizza and Subs had been located next to a big USAF base for 15 years. Over half of my crew was either military or military dependents. When Saddam sent his army into Kuwait, Wurtsmith AFB was put on high alert. My GI's couldn't come to work. They were on a high state of readiness. Then, they started being flown over to Saudi Arabia. In no time at all, 900 of my friends and customers were deployed. These were serious times. The price of fuel started to climb. The forecasters were predicting $2.00 a gallon and 4,000 casualties in a ground war. Thank goodness both predictions were way off.

Prior to these times, almost every pizzeria offered fast, free and hot delivery. After my drivers came to me and asked for relief from the rise in gas cost, I agreed. I increased their per run reimbursement from 50 to 75 cents.  Then I wondered where the money was coming from. At that time, I was averaging 4,000 deliveries per month. We're in a nickel and dime business, and I just gave away four thousand quarters a month. This was a time for some professional advice. I set up a meeting with my accountant. He had kept me out of financial hot water for years. He taught me how to make money and how to save and invest. He was a beloved and trusted friend. Everyone needs a mentor and mine was Chuck. He was a wise old grizzly who never steered me wrong. He opened my eyes to things we called "Blinding Flashes of the Obvious."

We were doing our accounting thing, like we had done a hundred times before. We were pouring over the financial statements and analyzing every expense. Not surprisingly, delivery expense had increased over $1,000 per month. He stopped me and asked me to explain. I told him the reasons for my decision to increase the driver's pay. I told him that they all were great team players, highly trained and were cross trained to make it, bake it and take it. I didn't want to lose them or force them to steal to make up the difference. They never threatened me, but after twenty years playing boss you get premonitions. I wanted him to do his accounting magic and find some areas in the P&L statement that we could shave and make up the $1,000 a month. He told me that my operation was so lean and mean that there was no fat in the expense area. I would just have to get used to the idea of $1,000 a month leaving my family's income. I said this was unacceptable. He then began to speak.

"All clients know what they want, very few know what they need. You want a quick fix to this problem and there isn't one. Is it morally wrong to charge the customer for a service that they want and expect? My boy, you need to charge for delivery or raise all of your prices to offset this new incurred expense." 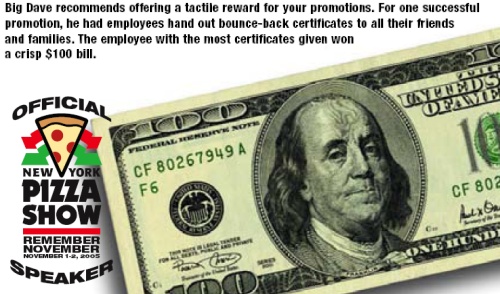 My first reaction to this advice was not good. Ten years ago almost no one charged for delivery, especially my biggest competitor. They invented free delivery. They even guaranteed it in 30 minutes. I told Chuck that he didn't understand the pizza business, and he told me I didn't understand money. He told me I didn't have to take his advice, just pay him for it. Then he hit me with the bomb. "How much does it cost to deliver a pizza? I did not know. He said, "Let's figure it out." We went back 10,000 deliveries. We factored in the cost of labor for the drivers. Then we added in the subtle expenses, matching social security, workers comp, non-owned auto insurance, employee meals and so on. The amount we calculated to deliver 10,000 orders was $25,100, or $2.51 per delivery. This was 14 years ago when drivers worked for $4.50 an hour. I would venture to say that in today's money, three dollars per delivery would be more accurate. It's amazing how convincing black and white figures can be.

After tossing and turning all night, I decided to be the first person in my town to start charging for delivery. This was a nerve-wracking decision and I knew there was going to be some customer fallout. I asked Chuck how I should handle it. He told me to expect questions from my customers when we announced the charge. His advice was to give them the truth. Explain that you couldn't hold the line any longer. Tell them that your delivery personnel were professionals in their field and were not able to get by without a bump in salary to offset the fuel costs. The really neat thing was there was a person and event to blame the whole mess on. The timing was perfect. Blame Saddam and Desert Storm. "If your customers don't think you are gouging them and it's a legitimate reason, people will be more accepting."

Chuck also gave me another insight. Timing is everything. I got past all of internal resistances such as: I'll have to print new menus, change all of my advertising and teach all of the crew how to properly communicate the message to all of our loyal delivery customers. I had some work to do, but I kept my eye on the prize. I was determined not to lose a $ 1,000 a month. It took me two weeks to get new fliers printed, and we did it. I had my crew educated after a lot of role-play and they knew how to diffuse irate, confused customers. The best line we used on the phones was, "In order to be fair with everybody." It worked like a charm, most of the time. Three people told me they were coming to the restaurant to whip my butt. Several stated they were going to sue me for false advertising, and a few defected to the competition. The overwhelming majority was understanding and wondered how we ever delivered free for so long.

My delivery counts dropped 300 the first month, 200 the second and went back to 44,000 before the end of the third month. Chuck was right. People will pay for service, not sell you out for a measly dollar if you make a great pizza and give them great service. They may not like it, but they will remain loyal. I'm asked, "Did your drivers tips go down?" The answer was, 'not much for very long.'

In retrospect, it was one of the gutsiest things I ever pulled off. In less than a year, my major competitor closed up and left town. The other pizza places in town followed suit and started charging a buck. A few years later, my next biggest chain competitor started delivery and started to charge two bucks. With thousands of units, I'm sure they did the math and knew what they had to do to almost break even. Naturally, it didn't take me long to copy them. A dollar is better than nothing, and two is twice as good. It still doesn't cover all of the cost, but at least it's not a complete loser. I've delivered well over a million pizzas and wished I had charged a dollar for every one. Too bad I didn't have the courage and foresight to start charging for the first 15 years.

If you decide to start charging, or increasing your fee to a more realistic amount, remember profit is not a dirty word. Give your drivers a quarter or a half of the delivery charge and keep the rest. There is no fairer or easier way to shore up your bottom line. Imagine giving yourself a $3-4,000 a year raise. Remember, gas stations increase pricing as often as necessary to stay alive. Why don't you?

The mission of my consulting practice, as well as Pizza Marketing Quarterly, is to assist pizza operators make and keep more profit. We measure success in feedback from readers like you. If you have any comments or would like a free report I wrote titled "Dominating the Delivery Market," simply email a request at my web page, www.bigdaveostrander.com, or fax a request on letterhead to 517-739-9115, and consider it done.

I always recommend that pizzerias charge for delivery. You would be financially able to raise wages for drivers and help turn the tide on low paid workers. You would also personally be able to pour the remainder of the charge into your stores. The annualized dollar amount is staggering. Timing is everything and the time is now.