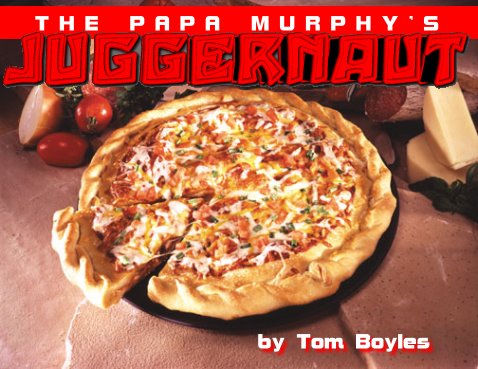 The faithful readers of PMQ may remember a little story Big Dave Ostrander wrote back in the summer of 2001. The article was titled Take-and-Bake – The Next Pizza Mega Trend.

Back then, most didn't know what a take-and-bake pizza was, and fewer knew about Papa Murphy's, but times change and now nearly everyone knows about them. Their success has risen to the point where PMQ recognized them and named them the 2003 PIE (Pizza Industry Enterprise) winner.

Papa Murphy's was one of only seven companies in the Top 25 to post increases in both sales and units. Sales for Papa Murphy's increased 5.70 percent while the number of units increased 5.92 percent. One of the reasons for Papa Murphy's winning the PIE Award is the fact that while the concept of take-and-bake is still in its infancy, they continue to expand their concept entering traditionally tough markets, like Chicago, while posting sales increases. This is a concept that directly addresses the problems the frozen pizza segment has been posing in the past few years, which is the capturing of RTE (ready-to-eat) sales.

Papa Murphy's was also selected as the best pizza chain in America by Restaurants and Institutions magazine. The award was based on a national survey of restaurant guests. The study, commissioned by Restaurants and Institutions magazine, was based on guest responses to seven attributes. The respondents rated 133 national and regional chains on these seven attributes, which are: food quality, menu variety, value, service, atmosphere, cleanliness and convenience. Papa Murphy's received the highest overall score in the pizza segment. "The significance of the Choice in Chains award lies in the fact that it is the loud, clear voice of restaurant guests, representing their preferences, whims and ever-changing tastes," said Patricia Dailey, editor-in-chief of Restaurants and Institutions magazine. 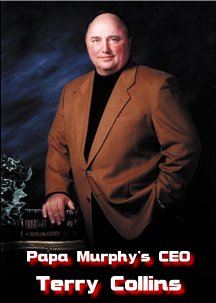 Of the 780 locations, about 98 percent are franchised. Papa Murphy's Take 'N' Bake stores are located in 22 states across the U.S.

The menu also includes gourmet and stuffed pizzas, as well as specialty pizzas. Pizzas come in 12, 14, and 16-inch sizes.

"I have been in the food business for many years," says Terry Collins, CEO. "I have worked for Pepsico, Victoria's Station, McDonald's, Taco Bell and others. In all of my experience, I saw take-and-bake as a product that could provide quality and value and it is a business that isn't capital intensive to open. Those are the three legs to the stool to make a chain. Consumers want to get what they pay for and saw that take-and-bake was a concept to do that. Today, the hamburger chains have made consumers more price conscious with their dollar menus and take-and-bake, with its low overhead, allows us to provide a high quality product at a good price."

"To overcome this image, we learned that sampling was the way to go. We would set up home ovens in the stores, out on sidewalks, in supermarkets – anywhere we could. Once they tried it, we had them and that is how we dissociated ourselves from frozen pizza. The idea of a good bake-at-home pizza wasn't there in the beginning. In all of the concepts I have been involved with, this is the only one that I have seen customers call and sing praises about.

"Our plan is to continue to expand state by state, opening about 100 stores per year. We are doing some test markets in places like Wal-Mart and in supermarkets. If these trials are successful, the locations will be in-store stores. The toughest market we have entered is Chicago. Advertising there is expensive."

Papa Murphy's main marketing tool is print advertising. "We do direct mail and newspaper inserts along with Advo mailings," Terry says. "Sampling is also a big part of our advertising. We go to soccer fields, county fairs and community events passing out samples to educate customers. Once you establish yourself, you do TV and radio spots when you can. Right now, national advertising doesn't make sense because we are not everywhere yet. I think that is still about two years away. I think we'll be in the top five chains in a few years."

Papa Murphy's has found a niche. Sales have been steadily rising and customers are becoming more aware of the concept. It hasn't hurt that the frozen pizza segment has boosted consumer confidence in that they are capable of baking their own pizza. With their stampede across the country, if you don't have a location near you now, you probably will soon. PMQ will present Papa Murphy's with the PIE award at the NAPICS show in Columbus, Ohio, which takes place February 8-9, 2004. Be sure to be there. For more information, visit www.napics.com.