The NeXT Generation: How Steve Jobs Changed the Way We Sell Pizza - PMQ Pizza Magazine 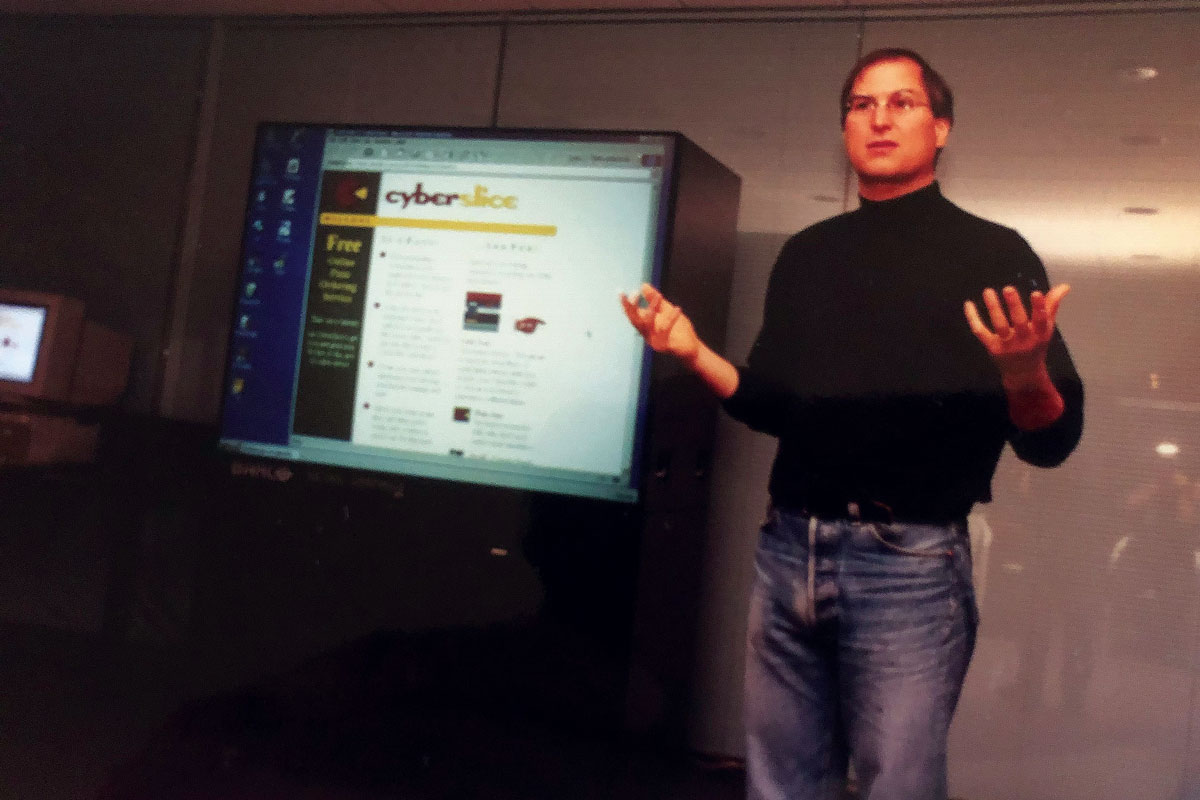 Steve Jobs made pizza industry history when he placed the first order on the CyberSlice website in 1996.

What do Steve Jobs and Sandra Bullock have in common? Believe it or not, both played a part in making online ordering a sales-driving powerhouse for pizzerias. The difference is that Bullock likely had no idea she was helping forge a new high-tech future for the pizza industry, while Jobs, the legendary technology mastermind and co-founder of Apple, Inc., knew exactly what he was doing.

Jobs’ influence on pizza is a story that has been largely forgotten. Not only did his WebObjects technology, developed during his hiatus from Apple in the late 1980s and early 1990s, lay the groundwork for today’s online ordering capabilities, Jobs made pizza

history when he placed the first online order for CyberSlice, a company that would set into motion an e-commerce revolution that has transformed the restaurant industry.

Bullock, meanwhile, starred in “The Net,” a 1995 film that was pretty forgettable in its own right. Yet, ironically, one brief throwaway scene in its opening moments provided the inspiration for the aforementioned CyberSlice—and for the world of online ordering that we take for granted today.

Finally, PMQ publisher Steve Green played his own role in the saga as a marketing consultant for CyberSlice. Here’s the story of how it all went down—and why online ordering is now a must-have for pizza restaurant owners across the country.

“We all understood that [the launch of CyberSlice] was historic…Today, it’s hard to imagine that online food delivery was hard to imagine, but it was!”
— Jesse Tayler, software engineer for cyberslice and inventor of the first app store

Unlike the less familiar story of CyberSlice, Steve Jobs’ rise, fall and comeback is the stuff of legend. Ousted from Apple in 1985, the 30-year-old Jobs wasted little time in building a new company that would literally change the world: NeXT, Inc.. His original goal was to build a budget-friendly desktop computer for the higher-education market. But he and his team went further, designing hardware and software that would create a cohesive computing experience for users. Bundled with NeXTSTEP software, NeXT computers went on sale in the late 1980s. Just a few years later, Tim Berners-Lee, a scientist at CERN in Switzerland, used his NeXT computer and its advanced object-oriented development tools to create the World Wide Web—and the digital race was on.

In a Wired interview in 1996, Jobs predicted e-commerce on the Web would transform the American marketplace. “If the Web got up to 10% of the goods and services in this country, it would be phenomenal,” Jobs said. “I think it’ll go much higher than that. Eventually, it will become a huge part of the economy.”

After watching “The Net,” Tim Glass, who cofounded CyberSlice in 1996 with Bryan Cupps and Jim Brimhall, had the same idea. In the film, Bullock portrays a hacker who stumbles onto a massive conspiracy rooted in digital technology. The movie’s opening scene depicts Bullock ordering a pizza online through a user interface sporting graphics and features that were quite advanced for the era. It was one of those borderline sci-fi moments that make great thinkers like Glass go, “Hmmm.”

And that’s where PMQ’s publisher, then a pizza industry consultant, comes in. “The first time I heard of CyberSlice was when I got a call from Tim Glass,” Green recalls. “He said he saw a movie with Sandra Bullock where she ordered a pizza (online), and he wanted to start an online ordering company. I thought it was my son playing a prank on me. Then he said he was working on the project with Steve Jobs, and that really caught my attention.”

Glass’s CyberSlice system was based on NeXT’s WebObjects tools. According to a press release announcing CyberSlice’s launch in December 1996, WebObjects “integrates geographical information systems from MapQuest with telephony software … to let consumers order pizza via the Internet from all registered pizza restaurants in their respective areas.” 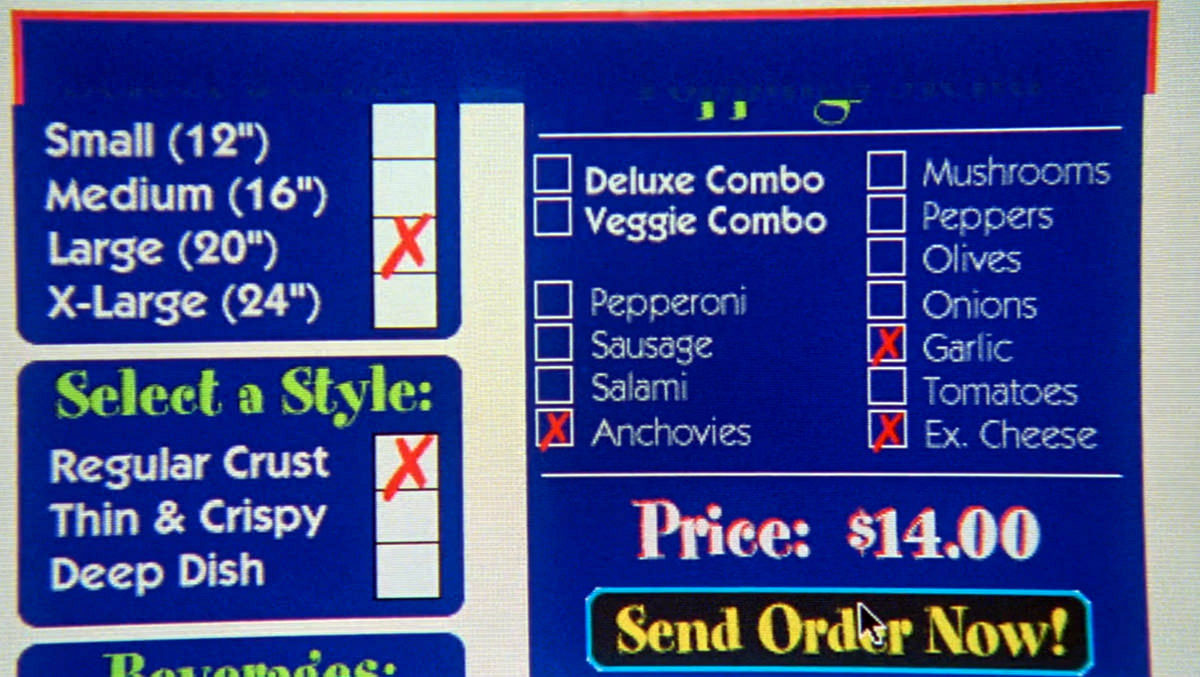 Ordering Methods Used in Past Year:

The beauty of the technology? Pizzerias didn’t need to have Internet access—or even a computer. Customers placed their orders through the CyberSlice website, triggering an automated phone call to the pizzeria. A robotic voice recited the order to the pizzeria employee, the order was filled, and a pie soon arrived at the customer’s doorstep.

Green’s job was to build a sales force and develop a strategy to sign up 1,000 pizzerias in the country’s four most wired cities—New York, San Francisco, Boston and Seattle—as CyberSlice clients. The restaurants provided their full menus, which were digitized for the website, and the result was a lot like the system depicted in “The Net.”

Pizza Hut had already experimented with localized online ordering, launching PizzaNet in 1994, but their delivery was limited to the Santa Cruz, California area, and an employee had to call the customer by phone to verify the order. “The beauty of WebObjects was that it was database-driven,” Green says. “You could take a thousand pizza stores, enter their info into a database, and, depending on the design template that the pizzeria owner chose for his store’s site, every destination would look different and have its own personality, and it would be a fun interaction for the consumer.”

But developing the back end of the site was a lot more work than fun. “We had many technology challenges, from browser incompatibility to connecting front-end web services to our online ordering system with a back-end database and voice recognition systems,” said Cupps, who was CyberSlice’s Chief Technology Officer and Vice President of Engineering. “In addition, we had to create proprietary data-entry applications to load the restaurant menus, logos and geolocation data for delivery zones as well as customer service applications to help customers who placed orders.

Nicole DeMeo was the director of worldwide communications for NeXT, Inc. when CyberSlice made its national debut and answered directly to Jobs at the time. “He really did approve CyberSlice personally,” she says. “Steve always got super-involved, and he thought CyberSlice was the right company and way to showcase the technology … Steve liked to showcase technologies that everyone can identify with. He was always the advocate of translating the B2B value all the way to the end customer. In this case, we wanted to show what backend technology did for the pizza restaurant and how it was also improving lives for the end customer.” 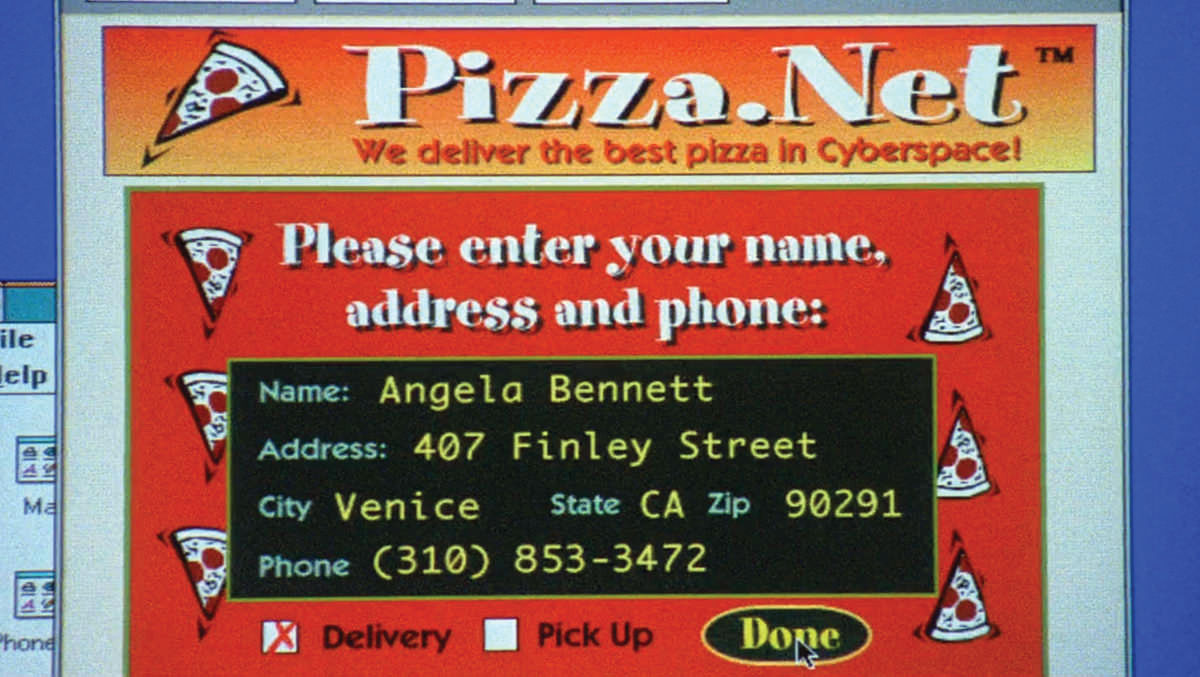 Milestones and Innovators in the Online Ordering Revolution

That’s why Jobs personally—and very publicly—placed CyberSlice’s first pizza order onstage during a press conference in Redwood City, California. For Cupps, launching the system with Jobs—not to mention meeting the famed visionary face-to-face—was unforgettable. “I was standing in a meeting room where we were going to do the presentation, and I felt somebody tap me on the shoulder,” Cupps recalls. “I turned around, and it was Steve Jobs.”

Jobs introduced himself and offered words of praise for CyberSlice. “He said he loved my website and our online ordering app, and I remember him saying it was really cool—a killer app,” Cupps says. “I was told later that he was normally not that complimentary … It was a big moment in my life. It was like being an automobile designer and Henry Ford comes up behind you, introduces himself, and tells you that you just designed a cool car, and he likes it!”

Once Jobs pressed the key to place his order, word on this futuristic new service spread like wildfire via TV and online media reports. Meanwhile, Green was back in Seattle, monitoring the incoming orders. “I was there by myself and worried,” he says. “I had no idea how many orders would come in. I was counting them as they came through, but about half were from people who’d gotten too excited and accidentally ordered a pizza [while testing the system], then sent an email saying they didn’t mean to do it. That was a very momentous occasion, and if I’d had a bottle of champagne, I would have smashed it over my head.”

“We had many technology challenges, from browser incompatibility to connecting front-end web services to our online ordering system with a back-end database and voice recognition systems.”
— Bryan Cupps, CyberSlice Chief Technology Officer and Vice President of Engineering

Still, there were plenty of doubters in those days. “Is this an industry worth creating?” one CNN.com writer wondered in a May 27, 1998 article. “After all, few things are as easy as phoning up the local pizza parlor or Chinese restaurant.” But customers and pizzeria owners saw it differently. CyberSlice soon evolved into Cybermeals and had signed up 13,000 restaurants when that CNN article was published. Venture firm Accel Partners took it over in 1999 and renamed it Food.com, vowing to make it “the nation’s dining network, offering consumers a single destination for anything related to food.”

If anything, the rise of the smartphone made online ordering easier than phone orders and, for younger generations, far preferable to ringing up some harried pizzeria worker and trying to get info on the latest specials. According to 2019 research by the National Restaurant Association, digital pizza orders have now surpassed phone orders. Pizza Hut’s online sales first hit the $1 billion mark back in 2013, thanks in part to its Xbox 360 ordering app. Domino’s used technology to overtake Pizza Hut as the No. 1 pizza chain last year and now offers 15 ways to order pies digitally. More than 60% of Domino’s orders are now placed online, and the company aims to eventually become a 100% digital business. For pizza chains of all sizes, online ordering has become a must-have, and more independents are beginning to realize they can’t compete without it.

And it all started with a high-profile nudge from Steve Jobs more than 20 years ago. Green remembers Glass telling him that Jobs had high hopes for online ordering from the start. “Tim said Steve Jobs had predicted that more people would be ordering pizza online than by phone within a year,” Green remembers. “As it turned out, we needed a lot of other things to happen, like being able to see videos of the pizzas and to have the Internet in your pocket so you could instantly order when you think about it. So it took about 20 years longer than Jobs expected, but it did happen.”

“We have a lot to thank Steve Jobs for,” Green concludes. “He was very aware of the importance of popular culture in product development. By featuring CyberSlice as the showcase demo of how his NeXTSTEP software worked, it was not only a tribute to our industry, but also an acknowledgement that pizza is cool, it’s culturally relevant and more than just a food group.” 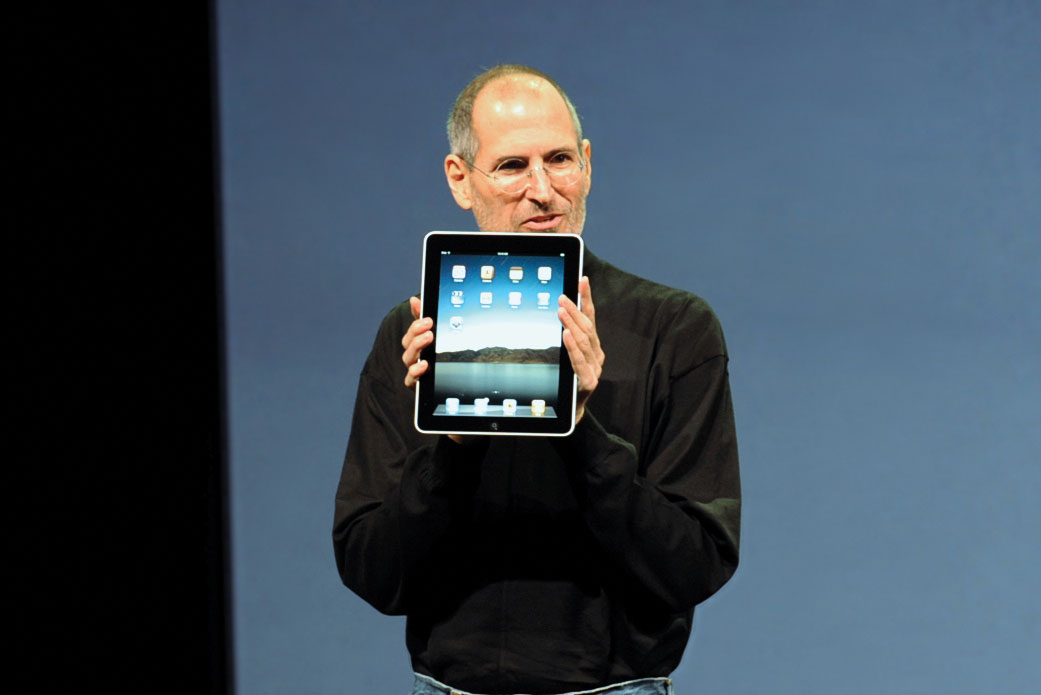