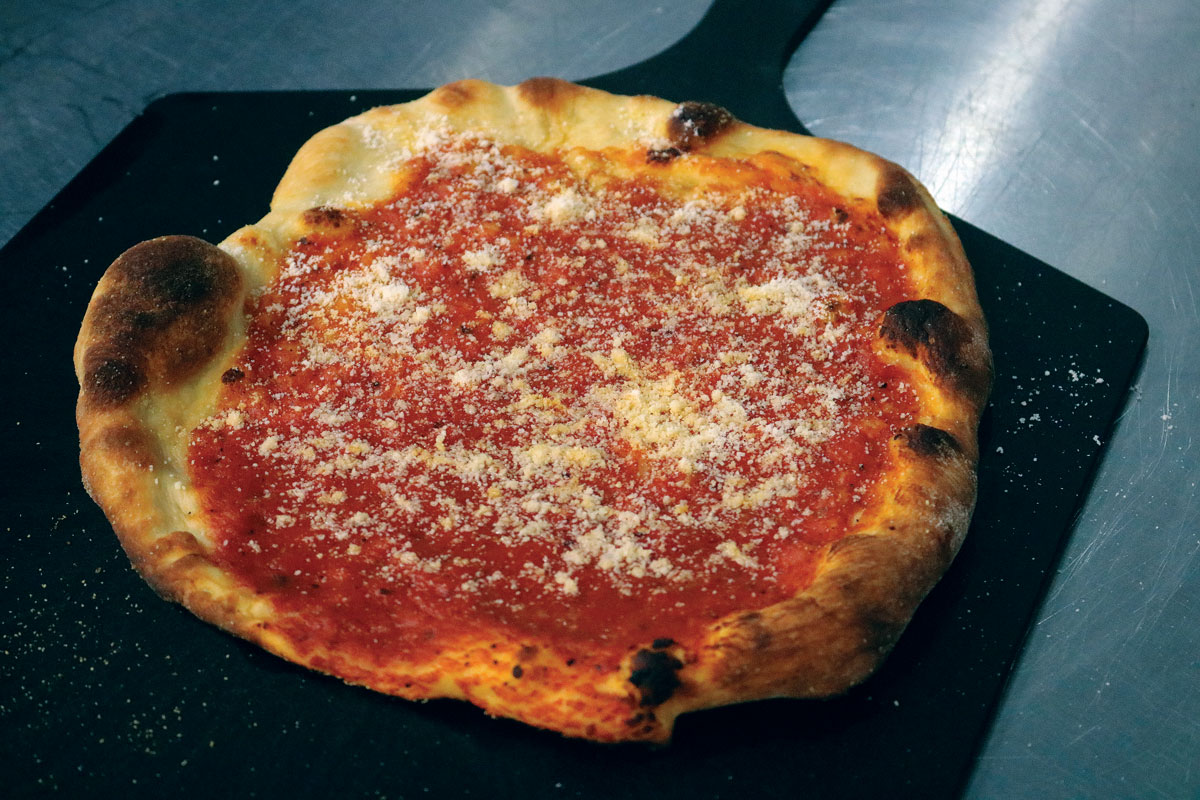 Gail Churinetz of Gail’s Pizza Parties made a classic New Haven Tomato Pie during her visit to the PMQ Test Kitchen.

Founded 360 years ago by the Puritans, New Haven, Connecticut, bills itself as the birthplace of the hamburger, but it’s also home to some of the best pizza on the planet. According to local legend, New Haven-style pizza originated in the early 1920s, when Neapolitan immigrant Frank Pepe began baking pizzas, then called tomato pies, and selling them to local factory workers on a pushcart. In 1925, Pepe purchased a building with a brick oven and began selling his pies from that location. Over time, two more signature New Haven-style pizzerias opened their doors: Modern Apizza (originally called Tony’s Apizza) in 1934 and Sally’s Apizza in 1938.

Known locally as apizza and pronounced “ah-beetz,” New Haven style serves up a thin-crust pizza, typically cooked at high temperatures in a coal-fired or oil-fired brick oven and served in an irregular or oblong shape. A close relative to the classic New York style, with roots in the Neapolitan tradition, New Haven-style pizza features subtle differences from the two that make it unique.

“We’re adhering to my grandfather’s exact recipes, and that’s what keeps us on top. It’s all about tradition.”
— Gary Bimonte, Frank Pepe Pizzeria Napoletana

The dough used in New Haven-style pizza is given more time to rise than traditional pizza dough, and the flour is a little lower in protein content—around 13%. “New Haven-style pizza is known to be a little bit crispier than most,” says Erica Pustari, manager of Modern Apizza. “It’s the water in the dough. We refrigerate and cover the dough and let it rise a little longer, because we use the mother yeast. It’s always fermenting and alive.”

The baking process also varies from the Neapolitan and New York styles. The oven temperature is close to 1,000⁰, and the pie bakes longer than other styles. The result is a crispy pie with a bit of char on the crust. “When it comes to baking New Haven-style pizzas, coal-fired ovens rank high on the list if you’re a traditionalist,” says industry consultant Tom “The Dough Doctor” Lehmann, based in Manhattan, Kansas. “While other types of ovens can be used successfully, coal-fired is the traditional way to go.”

Coal offers a big advantage over wood, according to Gary Bimonte, grandson of Frank Pepe and an owner of Frank Pepe Pizzeria Napoletana. “Coal burns at 1,000˚, and wood burns at 600˚ to 700˚,” Bimonte says. “Wood gives off a moist heat, whereas coal burns at a high, intense, dry heat, and that tends to seal all the flavors in and gives the pizza its signature char. That’s what Frank Pepe’s is known for.”

Modern Apizza originally fired its oven with coke, a byproduct of coal, but switched to an oil-fired oven due to a shortage of coke around 1967. “New Haven pizza is definitely a little bit charcoal,” says Pustari. “You put that darker color on the edges. It’s not really doughy, but crispy—not too crispy, but it has that raw brick taste to it. Working with an oil oven is going to taste differently than a wood-fired. With wood fire, you get that woody taste to it, that smoky taste, but when you work with an oil-based oven, it’s a completely different animal because of the way that it cooks the pizza. It’s more concentrated on the pizza and not about that woody taste. It’s all about the dough. The smokiness from the wood would take away from the taste of the dough.”

“When it comes to baking New Haven-style pizzas, coal-fired ovens rank high on the list if you’re a traditionalist.”
— Tom “The Dough Doctor” Lehmann

The White Clam Pizza is an iconic New Haven pizza. It originated in the 1940s, when Pepe put clams, a popular appetizer at the time, on a pizza, and added olive oil, garlic and oregano. The baking process melded those ingredients with the clam juice, essentially creating its own white sauce. “Our White Clam Pizza has been recognized three years in a row, voted best in the country,” Bimonte says.

Two final, if intangible, elements of the New Haven pizza style are tradition and family. Modern Apizza is still family-owned, while Frank Pepe’s is owned by a family-run corporate board. “I have three sisters and three cousins, so there’s seven of us,” Bimonte says. “The family is still very much in control. It’s still a family-owned business, even though we do have a corporate entity—Frank Pepe’s Development Company—and all of our locations are company-owned. We do have outside investors, but the development company controls everything.”

Those close family ties are what make New Haven pizza so special, Pustari believes. “Modern is family-owned, and my mom is from Italy, so the family and the roots of where the food comes from are a little more authentic.”

And these New Haven apizza clans aren’t planning to mess with success. “The family’s not changing a thing,” Bimonte says. “We’re adhering to my grandfather’s exact recipes, and that’s what keeps us on top. It’s all about tradition.”

Bill DeJournett is a PMQ contributor.