The mother of all pizzas - PMQ Pizza Magazine 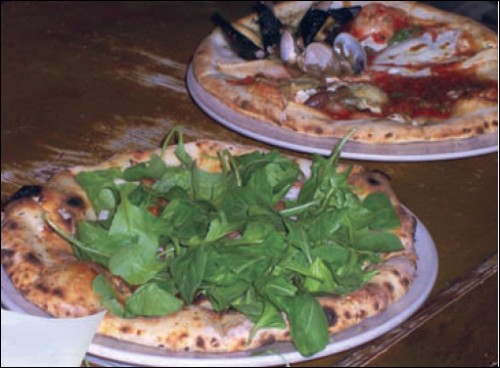 Naples, Italy, has a craft – a genuine purpose to its name – pizza. Taking one of the most diversely celebrated dishes of the world and condensing it to the original Neapolitan style is now the law of the Verace Pizza Napoletana (VPN).

Since some of the ingredients can be hard to come by in the United States and the culture of Neapolitan pizza-making is considered an art, it has been officially recognized by the Italian government that only twelve pizzerias in the United States are up to par with the rules of a "true" Neapolitan pizza practice. According to VPN President Peppe Miele, if it is a true Neapolitan pizza, its crust will be hand-formed dough made of Caputo flour, its sauce should be made from imported San Marzano tomatoes and then covered with fresh slices of buffalo milk mozzarella cheese and baked in an 800°brick oven.

"Neapolitan pizza is a culture that we in Verace Pizza Napoletana try to uphold in America because it's truly the mother of all pizzas," Peppe said. "In the 1700's and 1800's, pizza was considered a peasant food because it was so cheap to make, but it became popular in Europe because it was a light meal and its ingredients were so varied." Peppe has the passion and know-how for the famous Naples dish and he's anxious to share his skills with others. Peppe founded the VPN in the United States in 1996. He is the man in charge of training new chefs and carrying out Naples' pizza tradition. His restaurant in Marina del Rey, California, Antica Pizzeria, is the only genuinely certified Neapolitan trattoria in Southern California, with sales around $1.2 million last year. Peppe said they use several different marketing applications in his restaurant including local media, newsletters, flyers, and a website, but that just pleasing the customer is the best advertisement around because "when someone likes what they taste, they tell their friends, and also come back for more." Peppe admitted that word-of-mouth marketing tops any other strategy money could buy.

Peppe said that some people love Neapolitan pizza's flavor and texture, but people who have traveled Europe and Italy appreciate it most. "People trying Neapolitan pizza may not understand it unless it's someone who is familiar with the Italian culture. The toppings are different and less abundant, and there's no such thing as pepperoni. The crust is also thin and cooked in a wood-burning oven instead of gas or electric, so the taste is simpler and much healthier than American pizza."

The rules were set forth by the Italian government in 1997 after professor Carlo Mangoni, a nutrition specialist at the Second University of Naples, was contracted to compile a sort of rule book specifying the true techniques and qualifications of Neapolitan pizza. The 42-page treatise covers everything from calorie counts to the actual Homeric origins of pizza. But, the most important context of this document is in the recipe area that tells about the ingredients and the methods of crafting an authentic Neapolitan pizza.

The rules say a certified VPN pizza must be baked on the raw volcanic stone surface of a bell-shaped, wood-fired oven. As a result, the pizza takes on a crisp, bubbly crust and a tangy array of flavors. Only five styles have been noted as truly genuine by the VPN, including Parmigiano-Reggiano, Prosciutto di Parma, and the classic Margherita, a pizza specific to Italy and most popular in true Neapolitan trattorias. It includes San Marzano tomatoes (or plum tomatoes as a substitute), extra-virgin olive oil, fresh basil, fresh mozzarella and Pecorino Romano. The colors of the Italian flag must be represented on the Margherita. According to VPN's strict rules governing Neapolitan pizzas, the lower crust must be cracker-like. "The bottom must be approximately the thickness of a credit card, while the outer crust should be about the size of a quarter, and very dense," Peppe said. "The crust will have black bubbles characteristic to a wood-burning oven and Neapolitan pizza."

Since Italian ingredients, such as San Marzano tomatoes, which only grow in the San Marzano valley of Italy, can be pricey and next to non-existent in the United States, some other acceptable ingredients have been noted: California-grown plum tomatoes, fresh mozzarella (Peppe makes his own mozzarella from boiled curd, milk, salt and water), and any premium brand of flour is acceptable, such as Caputo flour from Naples, Italy. "Using American products instead of Italian products is acceptable," Peppe said, "but because the soil composition, the climate, and the water is different in both countries, the taste will be slightly different. We want to see certain tastes and ingredients, but we are not going to force members to buy the more expensive product when these Italian products are simply unavailable in the United States." 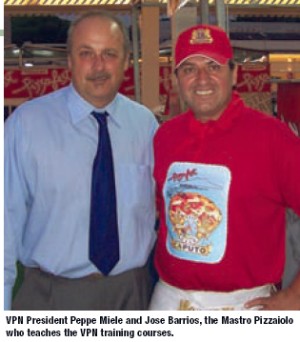 For example, Peppe explains, until recently, Caputo's flour was not readily available in Los Angeles, but now that it is, "I use it because it is renowned as the best flour in Italy." He said his clients have already recognized a difference in the pizza since the change, with some guests even asking to buy the Caputo flour for baking at home. "That just goes to show you that Americans are increasingly aware of what goes on in Italian cooking," Peppe said. He adds, "Using real Italian products, when they are available, gives the restaurant owner a special market position over others in the industry." At Peppe's restaurant, a 12-inch pie of eight slices starts at nine dollars with the basic toppings of the Marinara, which has fresh tomato, garlic, and oil. The most expensive pizza on Antica Pizzeria's menu is his specialty pie, Mergellina, which consists of Scallops, shrimp, chopped tomatoes and arugola, which sells for about 13 dollars.

Over the course of the next few months, Peppe Miele plans to put his training skills to use in a new facility that is under construction in California. He wants to be able to train more restaurateurs interested in the Verace Pizza Napoletana. He currently trains at his restaurant, Antica Pizzeria, but can only take one student a week because of space and time. For $1,300 students can expect to work and train in the restaurant under Peppe's guidance for three days and nights. For $2,200 students can work for a full week.

Peppe is eager to show how Neapolitan pizza has shaped in the United States. He headed up an American delegation of VPN members at the annual Verace Pizza Napoletana Pizzafest at the Mostra D'oltremare in Naples, Italy, on September 8-18, 2005. The "ultimate pizza festival" took place in the hometown origin of Neapolitan pizza. There was an outdoor event with Vesuvius in the background. "It is fantastic for VPN members from the United States to have our own booth showing that Neapolitan pizza has international appeal without so many worries of compromising the quality," Peppe said. 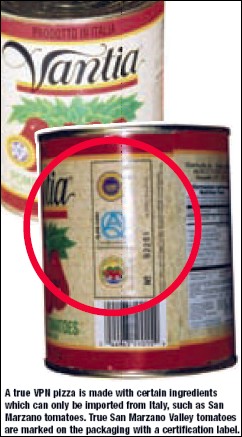 Peppe is also interested in taking VPN on the "ultimate road trip," he says. Verace Pizza Napoletana has commissioned mobile state of the art kitchens, fully equipped with wood-burning ovens. "It's actually a container, like cargo holds on ships, which open up into a kitchen with a canopied seating area where participants can watch the pizzas being made," Peppe said. He explained that the containers will serve as a mobile showcase for Neapolitan pizzas. The first events will be held in Europe this year. "We want to be able to reach people who aren't likely to have a Neapolitan pizzeria in their area and this will be a good way to do that. Sort of a moveable feast," Peppe explained.

Besides running his restaurant, being an instructor of Neapolitan pizza-making, and running the business of the Verace Pizza Napoletana, Peppe is also in the process of creating a newsletter/journal that will go to American pizzerias interested in VPN, informing them of what's going on in the Neapolitan world of pizza. It will include new members, events, vendor information, and success stories dealing with the authentic Naples dish.

For more information on the VPN or if interested in becoming a member of the Neapolitan pizza culture, visit their website at http://www.verapizzanapoletana.org.