The mother of all pizzas: How a determined crew of American pizzaioli set a new world’s record - PMQ Pizza Magazine 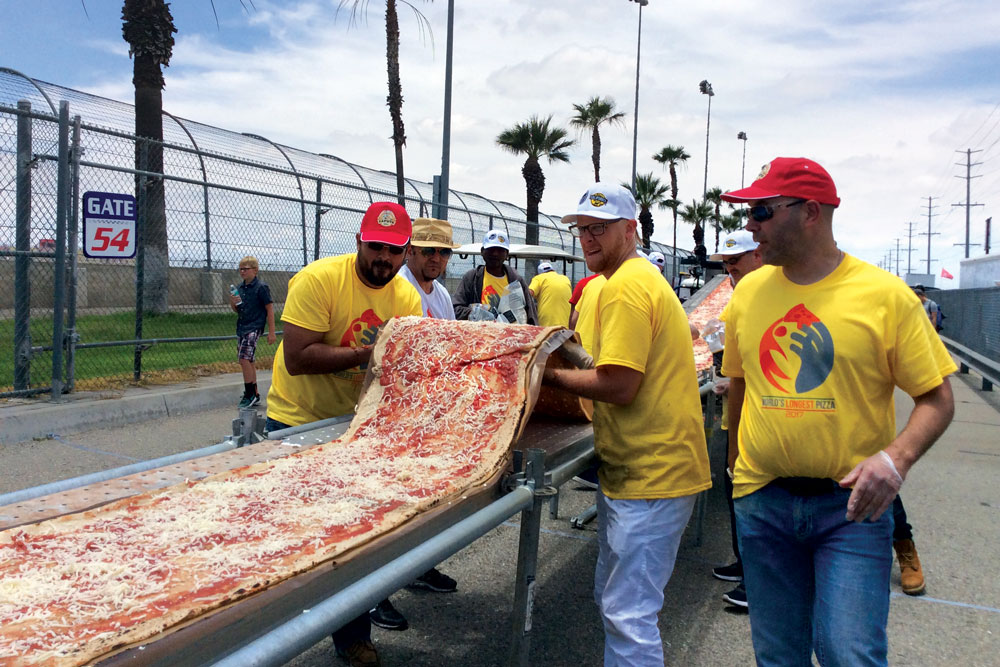 It was a show of perseverance and camaraderie on June 10 when dozens of pizzaiolo came together at the Auto Club Speedway in Fontana, California, to set a new Guinness World Record for the world’s longest pizza. PMQ was on the scene to witness nearly 100 pizza makers, many of whom had been cooking and assembling pizza since the night before, rally together and bake a pie that would go down in history.

And while previous records had been set in several other countries, according to the Guinness Book of World Records, the United States has never held the title—until now. Fash Asvadi, director of PizzaOvens.com and Italforni USA Ovens, wanted to change that. The project officially started in 2016 when a team was formed by Asvadi and experts from the industry, including Giulio Adriani, Tony Gemignani, John Arena, Fred Mortati, Massimo Balacchi, Tom Lehmann, Mario Vollera, Jimmy DeSisto and Roberto Caporuscio. The pizza to beat was a 6,082-foot behemoth built just one year ago in Naples, Italy. Here’s how the American team claimed the record as their own.

The pizza built in America had to meet strict health code regulations set forth by California, allowing only four hours from the time it entered the oven until it was distributed to eat. “The 18,000 pounds of dough was created at Venice Bakery and strategically built to maximize efficiency once we arrived at the Fontana raceway,” says DeSisto, CEO of Venice Bakery. “The dough sheets measured 24” by 36” and were designed to lay on top of the scaffolding, with each sheet overlapping by 2” until our 1.3-mile distance was achieved.”

But the California Health Department’s requirements made the task even more difficult than it sounds, DeSisto notes. “We had a four-hour time limit, once the pizza was topped with sauce and cheese, to bake, cut, box and deliver the pizza to food shelters. Because of this time parameter, 500 feet of our pizza was not considered for the Guinness Book of World Records.”

Pizza makers worked overnight, par-baking and wrapping the mile-long crust on top of chicken wire and Teflon for stability and protection from the elements. Asvadi, who served as the project manager, says the initial phase went fairly smoothly, but the team encountered technical issues as they worked through the wee hours. “For example, we did not foresee the propane freezing up during the night,” he says.

Philippe Levasseur, president and CEO of Dynamix USA, had to stay next to the ovens for most of the night, monitoring and resetting the gas and regulators whenever there was a drop in temperature or pressure during the par-baking process. “The regulators were icing due to the cooler outside temperature, humidity and large amount of gas being consumed,” he explains.

The Day of the Event

Once the team survived the par-baking process the night before, it was time for sauce, cheese and a second bake on the day of the big event in Fontana. The moving oven was fired up, the par-baked dough was methodically unwrapped, the pizza was sauced and cheesed by dozens of fast-working hands, and the finished pizza was wrapped for a second time as it exited the oven, which traveled down a 7,000’-long track of scaffolding.

As with the night before, this day presented its own set of challenges. “We had a major problem the morning of the second day,” says Giulio Adriani, founder and culinary director of an upcoming concept called The Local Pizzaiolo in Atlanta. “During my inspection of the par-baked crust, I noticed most of the junctions of the pizza were breaking. I immediately called John and Tony. We created two teams of patchers, who fixed the breaking parts with a torch and emergency dough. Everything was going smoothly, and then I got a call from Jimmy [DeSisto] saying, ‘Giulio, run here, the pizza broke in the oven.’”

Adriani says he called Gemignani and told him to finish the pizza in front while they patched the back. “I took Roberto Caporuscio with me, and we rode a golf cart to the end, cut 100’ from the already completed end, and used it to patch every single piece that was broken here and there,” Adriani recalls. “You had no idea what was going on. The radios were literally going bananas.”

Levasseur, who was in charge of the technical aspects of the oven, walked away with quite a few burns after nudging the pizza through the oven on more than one occasion. “During the cheese melting, the chicken wire we used to stabilize the bottom below the Teflon sheets got caught in the ovens, because the links were made to go the other way,” he says. “Luckily, we had foreseen it, and sections of the oven were able to open from the top, so I reached inside to unjam the pizza, although I did burn myself a lot.”

“Everything that could have gone wrong did,” says restaurant owner/author Tony Gemignani. “From 20’ sections being destroyed and burnt, the oven having difficulties toward the end, the California heat, and the time restraints, there were so many obstacles to overcome.”

“A project like this is always full of surprises, but the possible pitfalls were mostly anticipated, and we had a contingency plan for just about everything,” says John Arena, co-owner of Metro Pizza in Las Vegas. “The lack of manpower certainly made it much more difficult. I think the drying out and separation of the dough sections was more extensive than we imagined, but Tony, Giulio and Tony’s assistant, Laura Meyer, refused to give up, so it all worked out.”

After a grueling four hours of stops and starts, tears, patches, and even a few flames, the pizzaiolo crossed the finish line feeling elation, relief, and for some, pure exhaustion, breaking a new world record with a 6,333’-long pizza.

At the completion of the bake, hundreds of boxes of pizza were distributed to area homeless shelters, and event attendees were invited to take boxes to go.

And, through all of the dough, sauce, cheese, sunburns and fatigue, there was an infectious collective outpouring of teamwork and pride. “The most rewarding part was seeing us as a family, a group of friends unified by this amazing product that has the name of pizza,” Adriani says. “[The United States is] definitely the biggest market in the world for pizza. This nation deserved this record. We already know that Italy will react and try to beat us again. Records are made to be broken. But the best part of it is that we did it, and we will forever be proud of this.”