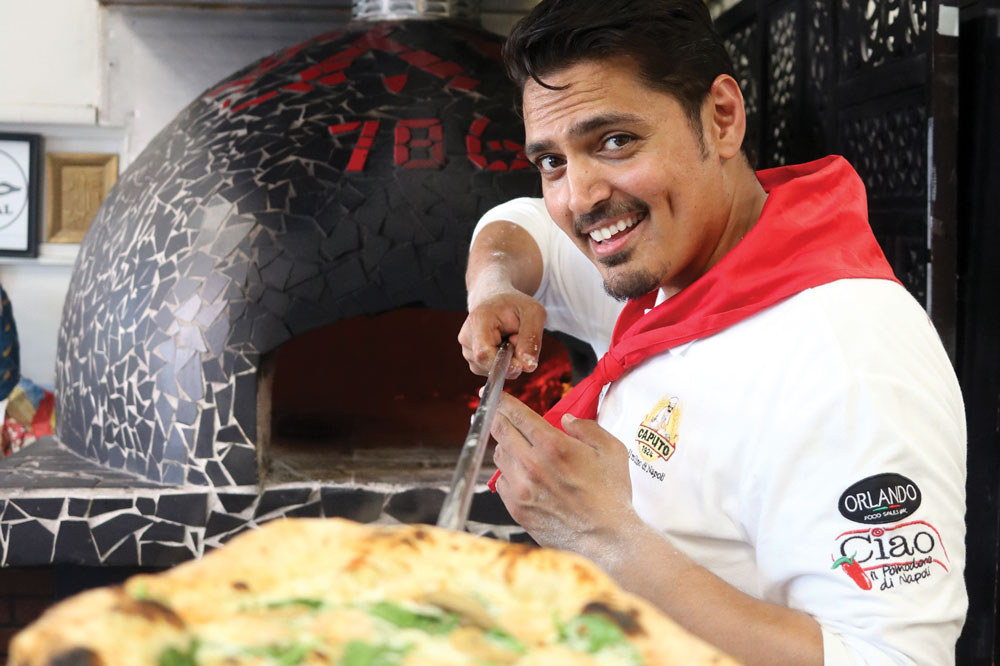 Ali Haider may be half-Iraqi and half-Indian, but he’s all Italian at heart. As owner of 786° Wood Fired Pizza Company in Sun Valley, California, the dashingly cosmopolitan Haider—he was born in India and raised in Kuwait before immigrating to the United States—terms himself an “ambassador of international flavors,” tweaking and melding styles from faraway lands and traditions to create one-of-a-kind, all-halal pies that will make you think while you drool.

Yet for all of their exotic influences and ingredients—from tandoor-baked chicken kebab to Egyptian garlic yogurt sauce—Haider’s pies are rooted in Neapolitan traditions and also somehow uniquely American. He is, you might say, a living embodiment of his adopted country’s melting-pot culture. “That’s what makes the U.S. so beautiful—people coming together from different parts of the world,” he says. “Like music, pizza brings people closer. It opens doors.”

And once those doors get opened, the convivial Haider, a member of the U.S. Pizza Team (USPT) and former Mr. India-America who speaks six languages, is the first one to stride in, dimples flashing and hand outstretched to anyone who wants to shake it.

The Coolest Gig Ever

A longtime foodie, Haider moved into the pizza business in 2014; he got tired of driving expensive cars and jet- setting around the globe. Well, not exactly. He’d already built a successful career as a spokesmodel for Volkswagen, the multinational German manufacturer that, in addition to the stalwart VW Bug, builds luxury supercars like the Lamborghini, Porsche and Bentley. It was actually brainy work that required a lot more than a pretty face. “I was a [communications] liaison between the company and the media and worked closely with design teams and engineering teams before a new prototype would be launched so I could explain them to the media,” he recalls. “It was a dream job—you get to drive the coolest cars, but you don’t have to sell them. You just write articles about them. It was the coolest gig ever. I still miss it.”

Why in the world would anyone walk away from a job like that to slave away in a hot kitchen? For the deeply spiritual Haider, love and family were more important. “After I got married and had kids, the free travel became the worst part of the job,” he says. “I didn’t want to stay away from my kids. I didn’t want to miss anything. I needed to come up with a new plan so I could stay as close as possible to my family.”

Haider’s culinary skills and lifelong passion for food showed him the way. “The tricky part was, I couldn’t decide which food,” he says. “I believe flavors are beautiful everywhere, all over the world. Why stick to one style? Why not pick up the best from different countries and present it like a painting? A painting on what? A painting on a pizza, because pizza is so universal, and you can tweak and design it as you like. Pizza would be the best canvas I could paint on.”

“People are starting to read more about other cultures and realizing that, oh, my God, how similar we are to each other! We were always similar, but the boundaries between us made us feel different.”
—Ali Haider

For a pizzeria with such a small footprint—it’s only about 650 square feet, with seating for 15 to 20 people—786° has an outsize reputation, with lines already snaking around the sidewalk nearly every day at opening time. Haider studied his craft in Naples before first opening a mobile operation in 2014 with a wood-fired oven he built himself. With a thriving catering business under way, he quickly expanded to his current brick-and-mortar location, qualified for the USPT and started winning national pizza making competitions, including the prestigious Caputo Cup in 2016 and the Best Pizza in the Nation award at the International Baking Industry Expo in 2016.

True to Neapolitan tradition, Haider makes his dough with imported Italian Tipo “00” flour, salt, water and yeast, letting it ferment for 72 hours. But, true to his own diverse roots, he incorporates sauces and toppings you probably won’t find in your standard pizza place in Naples. He uses only ingredients that meet the Muslim religion’s strict rules of halal (which means “permissible”). And that, he says, gives him a culinary advantage. “People enjoy halal foods more because they feel like, ‘Oh, my God, halal meat tastes so fresh, and it’s healthier,’” he explains. “Of course, as the chef, I take the credit, but the reality is, that meat’s not frozen for years like other meat. Ninety-five percent of my clientele do not even know what halal means, but they do notice the difference.”

They notice Haider’s custom-made wood-fired oven, too. Haider describes it as “the mother of all ovens”—a 5,200-pound leviathan made of Mount Vesuvius lava rock. “A lot of people ask me, does it make a difference? Yes, it does,” he says. “Does driving a Ferrari make a difference? Yes, it does, but you have to know what you’re doing to drive a Ferrari. To use an oven like that to its full potential, you have to be on your toes.”

Haider fires his pies using mostly oak, although he prefers olive wood. And, of course, the pizzeria’s name refers to the average temperature at which he bakes his pies. “Anything between 750 to 800 degrees is my sweet spot, so 786 comes right [in the middle] there,” he says. But the number has a deeper significance to Haider. “When I was starting my journey in pizza and trying to make something magical happen, I learned that 786 in numerology is considered one of the luckiest and most blessed numbers,” he says. “My cousins told me I should look into this number and bake my food at that temperature—it could be an asset. When you’re starting something new and you don’t know where the future lies, any blessing helps. And I’m here attesting to that—the number is lucky, and it is blessed.”

It’s good to be lucky, but talent, skills and a willingness to take risks come in handy, too. One look at the menu at 786°, and you know you’re not in Naples. There’s the Bombay Tikka Masala, a sophisticated, flavor-packed magnum opus that pays tribute to Haider’s homeland. “For that recipe, I flew myself to a small city in India where my mom’s ancestors are from,” Haider explains. “It’s a three-day process just to make the masala sauce. It has saffron, turmeric, mint, yogurt and a bunch of Indian spices. We let it marinate in a clay pot for about 48 hours, then bake it in the oven for about 50 to 55 minutes to get that smoky flavor.”

The Bombay Tikka Masala has become one of his signature pies, but it’s rivaled by the Istanbul. This Ottoman- influenced stunner boasts a yogurt-based sauce called haideri, made with 21 herbs and spices, plus Turkish doner kebab (chicken cooked on a vertical rotisserie), onions, mozzarella, olive oil and Himalayan salt, all topped with fresh cucumber slices. “We get nothing but compliments on that one,” Haider says.

Then there’s the Habibi (an Arabic word often translated as “my love”), which starts with an Egyptian garlic yogurt sauce and features lamb or beef kofta, a type of meatball often found in Middle Eastern cuisine, plus smoked mozzarella, roasted onions, and Egyptian herbs and spices.

Slightly less exotic, perhaps, but equally delectable, is Haider’s Shrimp Tuscany pizza, which he introduced at the World Pizza Championship in Parma, Italy, last spring. It’s made with a creamy pesto chutney base and garlic shrimp, a variety of mushrooms, truffle oil, mozzarella, Fontina and Parmesan cheeses, arugula, chopped garlic and thyme.

“I believe flavors are beautiful everywhere, all over the world. Why stick to one style? Why not pick up the best from different countries and present it like a painting?”
—Ali Haider

The Secret Menu in His Head

If none of those pizzas sound good to customers—which is hard to imagine—they needn’t fret, because Haider says he usually has 56 pies in development at all times. In fact, many of his regular customers “come in and don’t even look at the menu,” he says. They know Haider has a secret menu stored away in a special compartment in his brain. “So I have to be on my toes and come up with something that will make them happy,” he adds. “That’s when I pull out from my list of 56 pizzas to impress them.”

Fifty-six sounds like a lucky number, too, but since freshness means so much to Haider, he can easily narrow down the list to between three and five recipes, depending on the season and availability of ingredients. “Whatever is freshly available, that’s the ingredient I’m going to use,” he says. “I’ll ask you what other pizzas you like so I can know your palate, and then I’ll design something I know you’ll fall in love with.”

And when he has some spare time, Haider will teach his guests a thing or two about other cultures and culinary traditions. He likes to point out that your classic Margherita pizza, while seen as a distinctly Italian food, owes its origins to ingredients that originated in other countries. “The most famous tomatoes are San Marzano tomatoes,” he says, “but the first seed for them was given by the king of Peru [to the king of Naples].” Meanwhile, the water buffalo is native to India and southeast Asia, and to this day, Indians often care for the animals that produce Italy’s famous mozzarella di bufala. And basil is also likely native to India, where many Hindus revere one of its varieties as a sacred plant. “It’s considered one of the healthiest leaves,” Haider says. “If you’re sick, you boil it and drink the water.”

Haider, who has little interest in politics, thinks everyone ought to bicker less and eat more pizza, a truly global food that pretty much everyone can agree on. “Because of the Internet,” he notes, “people are starting to read more about other cultures and realizing that, oh, my God, how similar we are to each other! We were always similar, but the boundaries between us made us feel different. The Internet will bring us closer together. Knowledge is power, and the more knowledge you gain, the more power and confidence you feel. On the flip side, people are scared of the unknown. That’s simple to solve—gain knowledge so you’re not scared anymore.”