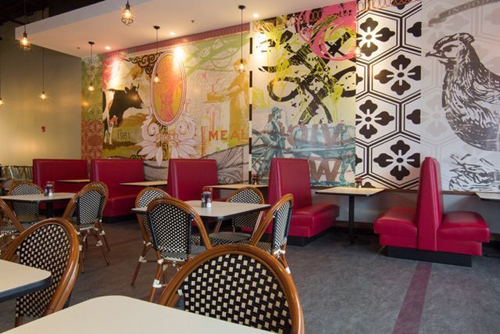 Two franchise owners have announced plans to open Loop Pizza Grills in growing communities south of Jacksonville – one in the Nocatee Town Center in Ponte Vedra, and another in Fleming Island.

Franchisee Maurilio Gonzalez will be opening a Loop in the fast-growing community of Nocatee in Ponte Vedra. This new Loop will be 3,200 square feet and will seat more than 140 people, including an impressive covered patio. Nocatee is the third-fastest growing planned community in the nation. Gonzalez is a successful Loop franchisee, having taken over the Neptune Beach location in 2009 and the Julington Creek location in 2010. He credits the Loop's commitment to fresh food for the entire family – as well as its family atmosphere – for franchisees wanting to expand and grow with the company.

"It is a good business model with a solid team. I really like the team that the Loop has to support their franchisees," said Gonzalez. "They have great operations and marketing support. They treat me like family and that is why I want to grow with the Loop.''

Gonzalez plans further expansion on the First Coast. He has signed an area developer's agreement and is scheduled to build two more Loops over the next several years.

The second new Loop location will be on Fleming Island. A search for the restaurant's location is currently underway by the franchisees – father and son duo Bryan and Jeff Jacobs.

The Jacobs family was drawn to the Loop after being longtime fans of the restaurant. It's been one of the few places that their entire family can agree on for dinner. The Jacobs are excited about opening a Loop in the Fleming Island community. They are currently searching for a restaurant location, which will likely be in one of the popular shopping centers in the community.

To learn more about the specifications go to Fleming Island Loop or visit http://looppizzagrill.com/locations/fleming-island.aspx.

"We want to open as soon as possible and the search for a location is going nonstop. We believe there is a pent-up demand for Loop food and its family atmosphere in the Fleming Island area,'' Jeff Jacobs said.

The new Loops will follow the prototype design used at the Jacksonville Town Center location, near the University of North Florida. The two First Coast locations follow in the footsteps of the reopening of a renovated Loop Pizza Grill in Winston-Salem, North Carolina earlier this year. The Loop founder and President Mike Schneider said the dynamic design of the Loop prototype attracts diners of all ages – from college students to families to grandparents – making it attractive to restaurant owners such as Maurilio, Jeff and Bryan.

"The Loop Pizza Grill is clearly on a roll with the opening of three locations in 2015 and other area stores reporting strong growth and winning a number of awards in their communities.'' Schneider said. "We are especially proud of Maurilio's continuing commitment to The Loop and we welcome the Jacobs family to our family of owners.''

Schneider noted the executive team has just begun a marketing push for franchisees and expects to announce more locations in 2016, both on the First Coast and across the Southeast. The new stores in Nocatee and Fleming Island will raise the number of Loops to 15, eleven in Florida and four in North Carolina.