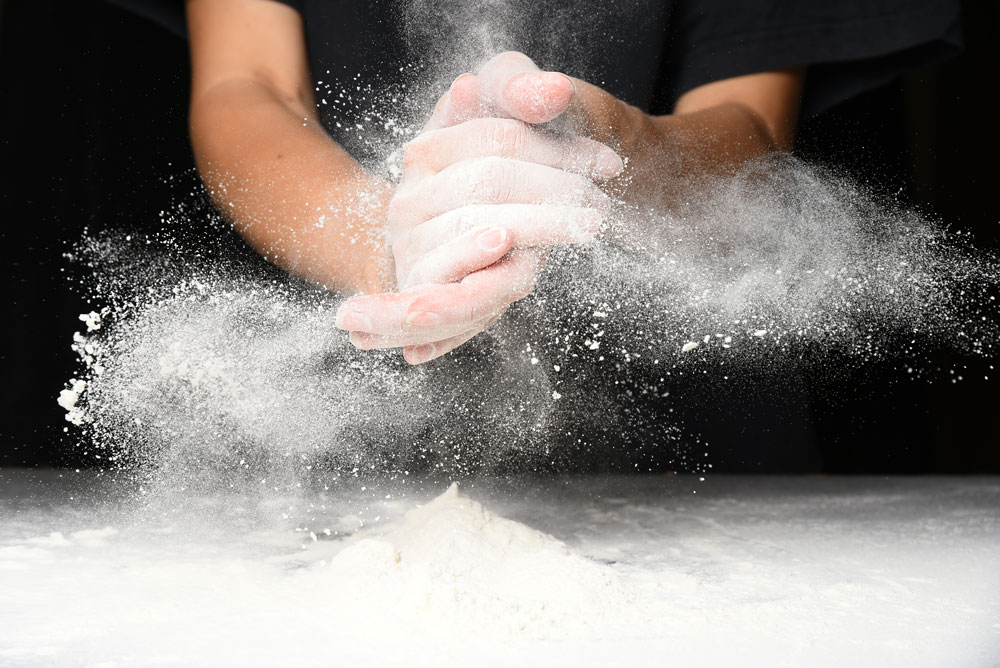 Though today’s manufacturers offer up an entire world of alternative flours derived from nuts, legumes, grains and more, there are plenty of variations even among old-school flour basics, such as white and whole-wheat. “In the pizza industry, we usually look at what we consider as a standard white flour—also known as a bakers patent grade flour—and whole-wheat flour,” explains Tom “The Dough Doctor” Lehmann, a pizza industry consultant based in Manhattan, Kansas. “But we also talk about 00 flour, which is just one category. Once you start digging deeper, you find out there’s a myriad of different types of white flour, and they’re not necessarily interchangeable.”

To understand the ins and outs of white and wheat flour, Lehmann walks us through some common variations and how they can affect a pizza dough’s finished characteristics.

Within the category of white flour, pizza makers traditionally deal with two types: standard and 00. Standard bakery grade white flour, also called bakers patent grade flour, works well for most styles of pizza. This type often has a protein content of around 11% to 14% or more and is the variety often stocked at the local supermarket. “These flours are very predictable in performance, but they may or may not be treated at the mill,” Lehmann says. “Especially in the 13% or 14% range, they may contain additional treatment in the form of potassium bromate, which may or may not be desirable.”

While there’s nothing wrong with the addition of potassium bromate from a performance standpoint, this ingredient can raise health concerns for some. For example, Lehmann notes that in the state of California, a warning must accompany products made with bromated flour, so using this type can force an undesirable stigma right onto your menu.

Another additive that is commonly used, ascorbic acid, is designed to accelerate the time from milling to usability. “When flour is first milled, it’s not the best for baking; it needs 30 days of aging to perform well,” Lehmann says. “But this process can be sped up at the mill with the addition of ascorbic acid.” Ascorbic acid is not a harmful additive; it’s another name for vitamin C. But the flour isn’t labeled with this name, due to the fact that vitamin C is denatured, or destroyed, during the baking process. 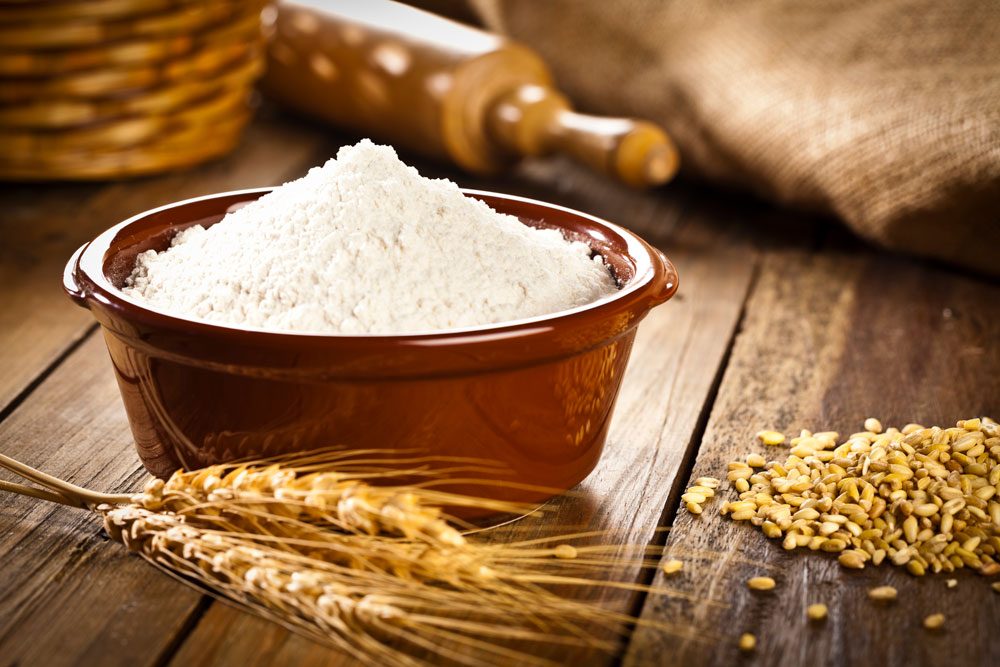 In an anaerobic environment (i.e., in a vacuum), ascorbic acid is a reducing agent, which allows a dough to develop faster. But in the presence of oxygen, it’s actually an oxidizer, or a strengthener for the proteins. The amounts used in flour are at extremely low levels—usually about eight to 12 parts per million—but ascorbic acid allows the product to be used within hours of milling with solid performance.

Malt or fungal enzymes may also be added to white flour. Malt is usually sprouted barley flour, which is high in amylase, an enzyme that attacks starch and converts starch into sugars. Those sugars are then metabolized by the yeast during fermentation. “There’s also residual sugar after baking, which is then used in the Maillard browning reaction, so caramelization takes place,” Lehmann adds. “That’s important, because you can also buy organic flours or some types of 00 flours that have no treatment at all. So if you were using a white flour that’s been malted and simply switch it with a 00 flour, depending upon your formulation—for example, if you don’t have any sugar in your formula—you might find that your dough stops fermenting on its own, or that you don’t get any color (browning) on the crust when baked.”

“Especially in the 13% or 14% range, [standard bakery grade flour] may contain additional treatment in the form of potassium bromate, which may or may not be desirable.”
—Tom Lehmann

Therefore, if using 00 flour, you might need to add a small amount of malt. Malt is labeled by Lintner value (measured in degrees, and abbreviated as L), which measures the activity of amylase present. If using a 20°L malt, you’ll need to incorporate only 0.25% with a nonmalted flour like 00. Do not add more than 0.5%—if you add too much malt, you’ll convert too much starch into sugar, creating a crust that doesn’t properly set (since starch is what firms the crust). If you’re using a malt with a higher Lintner value, do the necessary math: For a 60°L malt, you’d need to use only 1/3 as much as a 20°L malt. Malt that is diastatic (enzymatic) will indicate the Lintner value so that you’ll know the correct amount to use.

There is one exception: If you’re using untreated 00 or organic flour and baking at 800°F or more, you probably won’t need additions like malt. Finally, Lehmann advises, when selecting a 00 flour, make sure the type is compatible with your dough management procedure, including fermentation time. (Check out the sidebar for more information on matching flour with fermentation.) 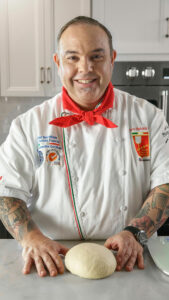 Chef Leo Spizzirri, master istruttore at The North American Pizza & Culinary Academy in Lisle, Illinois, shares his methods for matching the appropriate flour protein to the expected fermentation time of the dough:

Selecting the right flour is critical to the final textural attributes of the pizza. Generally speaking, the shorter amount of maturation time between mixing and baking the dough, the lighter the flour should be. In most cases, a dough with a total maturation of 24 hours, for example, should contain a protein percentage of no more than 12% to 12.5%. As the maturation time increases, so will the protein.

As a common rule, we use the following guidelines in our classes at The North American Pizza & Culinary Academy for doughs:

As the dough matures, it is important to remember that the strength of the flour affects more than just the structural attributes of the dough; it also affects the amount of color the final baked pizza will get. Using a flour that is too weak for the process will show signs of gumminess in the crumb and look white on the exterior. Selecting a flour with too much strength will cause the exterior of the pizza to appear dark-brown or even burnt, sometimes before the crumb has a chance to finish baking properly and release its moisture or humidity. A heavy flour for the process will also be difficult to stretch and will seem dense or heavy after baking.

Wheat flour also includes two basic types. Stone-ground is a coarser flour, with rougher-hewn particles and a more rustic appearance—it’s the variety that most consumers associate with wheat baked goods. Another type is fine-ground whole white wheat, which offers the appearance of “regular” flour and can even lend a finished appearance quite similar to white flours. “They’re now growing varieties of white wheat, as an alternative to hard red wheat,” Lehmann says. “White wheat is predominantly grown in Australia, while red wheats are predominantly grown in the United States, Canada, Venezuela, Argentina, Russia and even Saudi Arabia.”

Red wheats are so-called because their kernels, or berries, are dark in color, due to a high tannin content. Tannins create a certain bitterness, which turns off some customers, so hard white wheat varieties (with less tannins) offer a more consumer-friendly taste with the exact same nutritional properties. Both of the options also contain the same amount of bran, but thanks to a finer ground for whole white wheat, the typical wheat characteristics, in both taste and texture, are less noticeable. Larger bran particles are, of course, easier to see and taste.

“When flour is first milled, it’s not the best for baking; it needs 30 days of aging to perform well. But this process can be sped up at the mill with the addition of ascorbic acid.”
—Tom Lehmann

Regardless of the type, however, wheat flour contains the bran, and white flour does not. When milling 100 lb. of flour, manufacturers must remove 18 to 20 pounds of bran to make it white—so about one-fifth of the product is bran. And, when working with wheat flours, it’s important to remember that bran absorbs water, but not as quickly as starch or protein does. “The kneejerk reaction is to make your wheat dough with the same amount of water you’d normally use, and the dough will feel normal at first,” Lehmann notes. “But when the bran starts to absorb water, it will absorb a lot, and the dough will get stiffer and stiffer. If you try baking with it, you’ll find out the meaning of ‘cardboard crust.’”

As a rule, use about 15% more water in a whole-wheat crust vs. a white crust. So, if you’re using 60% absorption with a white flour, increase to 75% instead. A whole-wheat dough should feel slightly wet or tacky after mixing; otherwise, there isn’t enough water in the formula. To assist when working with the wet dough, simply use a little oil on your hands or work surface.