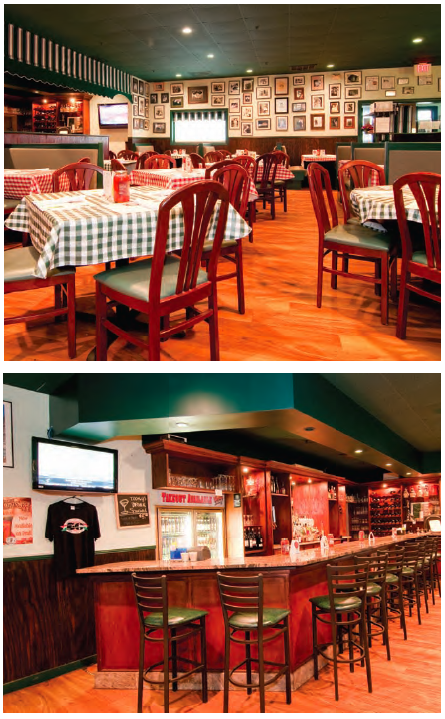 A good business knows how to evolve with the times—especially in a down economy. Sometimes, when your neighborhood changes, it’s best to take your product to a new territory, instead of sitting idly by and watching sales sink while hoping things will somehow get better. This reality was not lost on Louie Belletieri, the owner of Louie’s Restaurant (louiesrestaurant.com), which has been serving up pizza and pasta in Allentown, Pennsylvania, for 52 years.

Two years ago, this restaurateur decided to say goodbye to the family business’ longtime downtown location and headed for the suburbs, where he nabbed a bigger building and rethought the way the Louie’s brand was marketed. While the menu has remained almost unchanged over the years, Belletieri has repackaged Louie’s offerings with a carefully monitored stream of email marketing, coupons, customer clubs, in-house specials and advertising. Today, with two locations and a burgeoning retail pasta sauce business in regional grocery stores, Belletieri knows his foresight has paid off for the family business; Louie’s has seen a steady increase in sales since the move. With a plan to retire within five years, he can now pass on the business to the next generation of Belletieris in good form.

How do you approach marketing?

My marketing philosophy has changed considerably in the last two years. We’ve been in business since 1958, so obviously we rely a lot on our reputation, and we used to do a lot of advertising that was just our logo; sort of a “we’re still here” kind of approach. But a few years ago we really started going after the sales. We started seeing the economy change and the customers change, and we wanted to be part of that change. There has been a significant change in our model. We’ve never really been big on changing our menu, but what we’ve done is change the offers on our menu. Up until two years ago, we never did any couponing—we were pretty much against it, and we didn’t need it because we had very loyal customers. But as the customer base changed, so did we.

How did your customer base change?

Our old location used to be in town, and now we’ve moved more to the perimeter of Allentown. Our base customers used to be lunchtime businesspeople. But, because of a lot of the changes in the city, a lot of businesses were closing or moving, so we did, too. We went to a bigger location that’s more suburban. Now we’re looking at a more family-oriented clientele; usually in the 35-to-50-year-old range. Allentown’s population is about 110,000, so it’s a pretty good-size town.

What sort of community involvement do you engage in?

I’ve always been very active in the city. At one time, I was the president of the chamber of commerce, and I’ve been on a number of boards. I had a local radio show that I used to do, and I even ran for mayor in 2005. So I’m pretty high-profile. I have a saying that I use a lot: “If you want a famous restaurant, then become famous.”

Did business go up when you ran for mayor?

Oh, sure. But, you know, I’ve been in this business 52 years. I grew up in this. Over the years there have been pivotal moments, and at every one we could see an increase in business. My running for mayor was honest. I didn’t do it to promote the restaurant; I did it because I wanted to run for mayor.

How has the economy affected your business?

Like I said, everything changed two years ago. But we decided we wanted more sales, so we moved to where they were. The result was that in a down economy we could actually do more business. So in the last two years, our sales have actually grown. I think last year we were up about 8% in sales. Profit-wise, we’re making about the same, but we’ve had to invest a lot into marketing. Prior to our move, we probably spent 1% to 2% of our overall budget on marketing; now we’re spending more like 5%. So we have to get that money from the extra volume. 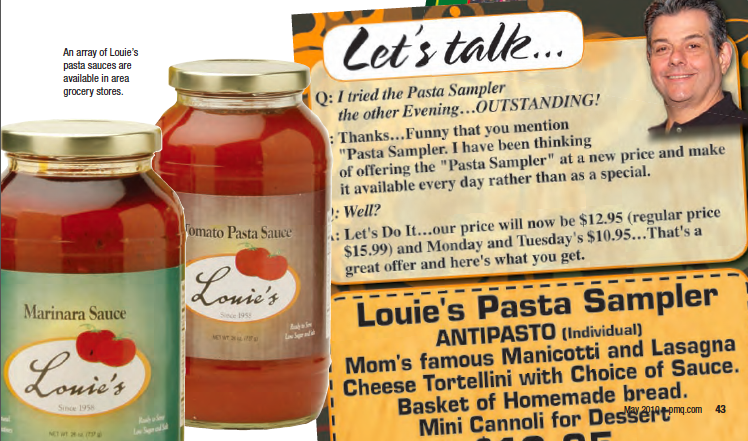 What is your current stance on coupons?

We’ve tried both added-value coupons and giveaways, but I think the most important thing is that we track everything. We have two restaurants, one in Allentown and another about an hour away. We also have our retail products, which are our pasta sauces. We base all of our marketing efforts on the Allentown location, so we created kind of a circle here. The sauce itself is a marketing tool; it has the Louie’s logo and is in the area grocery stores. People see it and immediately recognize it as ours. But in two years we’ve figured out that there are certain coupons that knock ’em dead and others that don’t. The free ones work well, obviously. Our biggest coupon is “buy one lunch buffet, get one free.” You’ve just got to keep up with what you’re doing with coupons. We haven’t found that coupons drive up our food costs because we drive a lot of the traffic toward our lunch buffet, where the costs aren’t as high.

How important is your website in your marketing plans?

At first, it was very important, and we put a lot of time and money into developing our website. But soon we realized that it wasn’t driving sales. We think that everything we do here should drive a sale no matter what. We go after things that lead directly to the customer buying something; that can be a coupon, or an email, or an ad in a newspaper on a consistent basis. We just started doing Facebook recently, and I think we’re up to about 800 followers. I put my picture in our advertising and I talk with customers. Our emails are just a question-and-answer with customers.

Do you have any special clubs for customers?

We have a gift card sale we do every October that we aim toward our more loyal in-house customers, and we have a birthday club that has been very successful. Right now we have about 11,000 people in it. If people sign up for it, they get a $5 coupon; some people do it in the store and some people do it online. But we take that information and build our email list, too—and email marketing is sort of our ace in the hole.

What’s the worst criticism you could get from a customer?

Probably “the food was different last time.” I think more than anything—and this is just my opinion—that customers want a better value for their money, but they also want consistency. Our menu has stayed pretty much the same over the years, and a lot of my employees have been here for years and have a pretty good education in how things need to be. We also have stuck with the same vendors for years—that way, we always know what we’re getting. The other thing is, we don’t cut corners—we do the same thing the same way every time. My whole theme with marketing is that before you go out and sell something, you’ve got to have the right product. This is especially important in this economy. Some guys are just sitting on their thumbs waiting for the customers to come back. This is the economy we have to work with. We have to go to where the customers are, and we always have to have a quality product.