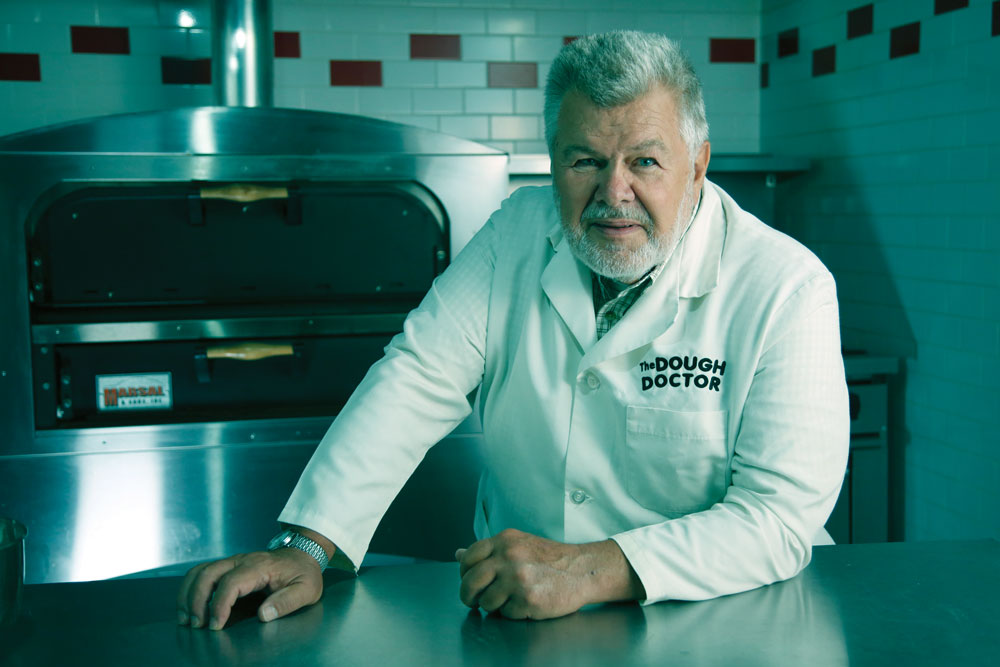 Tom “The Dough Doctor” Lehmann made a rare house call to PMQ recently. So, naturally, we badgered the pizza industry legend for a lot of free advice while he was here. Fortunately, he was, as always, gracious and happy to share his tips on dough management with our readers. Some of the highlights follow.

Dough temperature is key to effective dough management. Blown dough is always the result of poor dough management practices. The No. 1 mistake is the failure to cross-stack your dough boxes. Once you’ve made your dough balls and boxed them, the boxes should be cross-stacked and placed into the cooler within 20 minutes. Cross-stacking allows air to flow freely through the boxes and around the dough balls, ensuring the balls cool down at a consistent rate. Failure to cross-stack your boxes creates an airtight seal, which traps and builds up heat in the dough boxes, allowing fermentation to continue for longer than desired. The balls may never cool off properly, or they may ferment for too long before cooling down, resulting in blown dough. Finished dough temperature is also important. Dough balls should cool to between 75° and 85°F before going into the cooler.

2) Get dough balls into the cooler quickly.

Take your dough straight from the mixer to the bench. Immediately scale and ball your dough. Place the balls in your dough box and wipe them with a little bit of olive oil. Then cross-stack the dough boxes and place in the cooler for between 2 and 2.5 hours, depending on ball weight. Then you can lid them or downstack them and kiss them good night. They should be good for up to three days without blowing.

3) Have an emergency dough plan.

Having an emergency dough plan is like an insurance policy. You pray to God that you never need to use it, but when you need it, you’re really glad to have it. Always have an emergency dough formula and procedure written down and secured in the manager’s office. To develop your emergency dough, you want to target a finished dough temperature of 90°F. Adjust your yeast levels—most people would roughly double it. If you use sugar, cut the amount of sugar in half. Mix the dough for the regular amount of time, then continue mixing for two additional minutes. Ball the dough immediately—do not put it into the retarder. Lightly oil the dough balls and stack them somewhere out of the way. They should be used within an hour and a half, no more than two hours. Be prepared to mix multiple batches until you can figure out a way to get more dough brought in.

“Having an emergency dough plan is like an insurance policy. You pray to God that you never need to use it, but when you need it, you’re really glad to have it.”

After cold-fermenting, your dough will come out of the cooler at roughly 36° to 38°F. They’re not going to open up easily or very well right away. If you open them up by machine, they’ll tear. If you open them up by hand, they will be extremely difficult to work with and will fight you all the way. You need to allow the dough to warm up sufficiently so the balls become malleable enough to open without snapping back. The dough’s internal temperature should be at a minimum of 50°F and a maximum of 60°F. As you’re treading closer to that 60° range, however, you are eroding the length of time before the dough ball has to be used!

Related: How to keep your pizza dough balls in tip-top shape

5) Tips for a par-baked crust.

You don’t have to make any changes to your dough formula itself for a par-baked crust. Baking is a different matter. You’d typically bake a pizza at 500° or higher, depending on the type of pizza. But when par-baking a pizza, a much better baking temperature is 400°F or a maximum of 425°F. If the temperature gets too high, the water starts to vaporize too rapidly, and you’ll cross that line between pizza and pita. Keep in mind that your dough wants to turn into a pita every single time, but there’s a simple way to prevent that for a par-baked crust. Pre-sauce the crust with about half of your allotted sauce and then par-bake it at 400°F. This will eliminate pocketing almost entirely. After it’s baked, add the other half of the sauce to your crust, and you’re good to go.

A planetary mixer is very, very effective and versatile, especially if it has a pelican head attachment. But there’s a movement in the pizza industry toward spiral mixers. I like spiral mixers because they’re nearly bulletproof—highly durable, maintenance-free and trouble-free. With a planetary mixer, the agitator drives through the dough, which takes a huge amount of power and torque. The spiral mixer uses what looks like a corkscrew to twist and turn the dough, requiring a lot less energy and making spiral mixers more durable. A spiral mixer also offers a much larger dough capacity. If you’re working with dough based on 50 pounds of flour—about 85 pounds of dough—a planetary mixer will struggle with that load. It’s no problem for a spiral mixer. Also, with a spiral mixer, the dough isn’t rubbed against the side of the bowl as much, meaning less friction and less heat during the mixing cycle. Your mixing time with a spiral mixer probably won’t change, but you might need to add another minute to the total time. You’ll also want to check your finished dough temperature. You may discover that you need to drop your water temperature by 5°F (to no lower than 70°F).