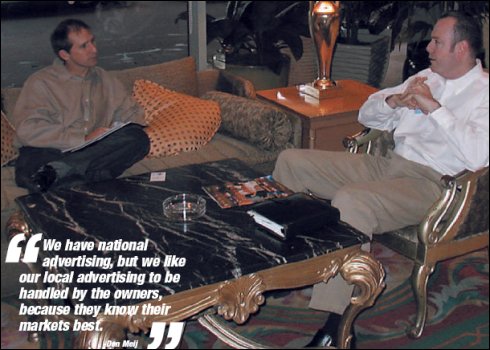 The independent pizza store operator has almost always dominated Australia and New Zealand. Several pizza chains have been able to capture market share, such as Pizza Haven and Eagle Boy’s. Even Pizza Hut is giving it a shot, but hasn’t been able to enjoy the success they’ve had in the U.S. and other countries. 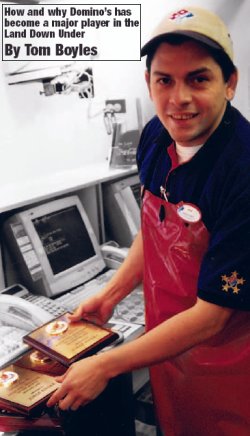 Some Aussies have started to notice the aggressive marketing of Domino’s Pizza recently and think they are newcomers, but they have been in Oz for quite some time. In a land with so many food choices and great independent pizza shops, how and why are Domino’s starting to make an impact?

Steve Green, PMQ Publisher, Stephen Millar, PMQ AustralAsia Publisher, and I recently spent two weeks in Australia and New Zealand traveling around the area getting to know the Australian pizza market better and learning more about how certain owners find success where others are just merely carving out a decent living. I had heard that Domino’s was starting to do well Down Under, so I made a few calls and met up with several key members of the Domino’s Pizza Australia team to talk about their company, marketing strategies and future plans. It may be time to take notice, because these guys have a plan and they know what they are doing.

Domino’s Pizza Australia is a 100 percent Australian-owned private company, which owns the master franchise to the international brand. They operate more than 250 stores across Australia and currently have five in New Zealand. They sell 40 million pizzas a year, making it Australia’s second largest pizza industry player. According to Don Meij, CEO and managing director for Domino’s Pizza Australia, they are looking to grow the Australasian segment to 500 over the next five years.

Currently, Domino’s has 61 stores in Sydney. “Sydney is the hardest market from a chain’s perspective,” Don says. “The property costs and logistics are difficult. Victoria is the second largest state and we have no stores there now, but have the first opening for them targeted for Christmas. When moving into a new market, you have to educate customers about your business. We do this through TV mostly, but also use mail. In Victoria, it will be a matter of taking stores from the competition. From a chain’s perspective, Queensland is more developed. To us, Western Australia is more of a mums and dads store region.

“Another market we are wanting to develop is New Zealand where we want to grow to at least 65 stores,” Don goes on to say. “By the end of the fiscal year 2003/04, the company expects to have at least 20 stores in New Zealand. Pizzas and our approach will be much different there. For example, chicken is much more popular there than in Australia.”

The key strategies Domino’s will use in their growth strategy in the next few years involves maximizing the trading performance of existing stores and expansion into new markets throughout Australia and New Zealand. To get more out of each store, they are working to maintain standards in staff training, providing support to stores so they can focus on serving customers, push for new products and toppings and innovative marketing and public relations efforts to keep Domino’s in the public’s eye and ear. Expansion is evident in their 2003/04 growth in store counts, which was up 22.5 percent. Development of new areas, not only Australia and New Zealand, is also a target. In July 2003, Domino’s opened four stores in Wellington in one month. They also have nine stores in Tasmania. 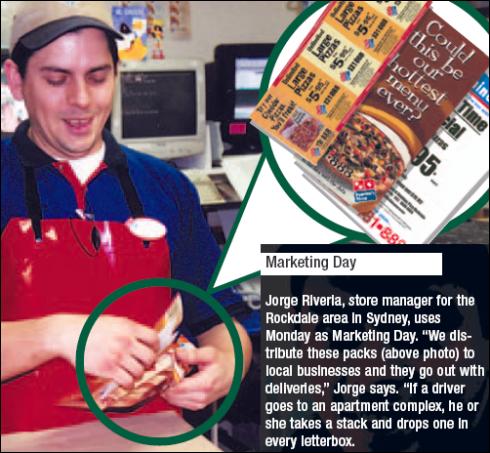 Television plays a key role in Domino’s marketing strategy. “Eighteen-to-25-year-olds are a key demographic to us,” Don says. “We are the largest television advertiser in the Australian pizza industry and we keep young people in our ads and use hip music in order to attract this market to our brand. We do not put a price on our pizzas in television advertising. It is all aimed at branding. We have national advertising, but we like our local printed advertising to be handled by the owners because they know their markets best. We also try to be involved with schools in many ways. We sponsor local teams and school lunch orders are huge, but like all other things, this varies by region.

“We have discovered that selling pizza by the topping does not work because the costs are too high,” Don says. “We have 14 specialty pizzas on the menu and rotate three new ones on and three old ones off three times a year. We have a product development and also offer $1,000 to the store with the best recipe idea. Before a new pizza gets on the menu, it must pass through our sensory group. This is a group of people who are sensitive to tastes and combinations. Each person is isolated when tasting a new pizza so they aren’t influenced by others.”

Wayne Mann, operations manager for the Sydney area, says they use three primary tools for local marketing. “Direct mail works the best, but is also the most expensive,” Wayne says. “Personalized letters get the best results. For mailing, all of our Domino’s locations are networked with our central office. They randomly select addresses for a store from the collective database. UDS, or Unaddressed Delivery Service, is the second best tool and PMP is third. With PMP, which is a leaflet distributor, we hire people to walk areas and drop printed materials in letterboxes; it is the least effective, but the cheapest. Individual stores can do what they want with box toppers.” 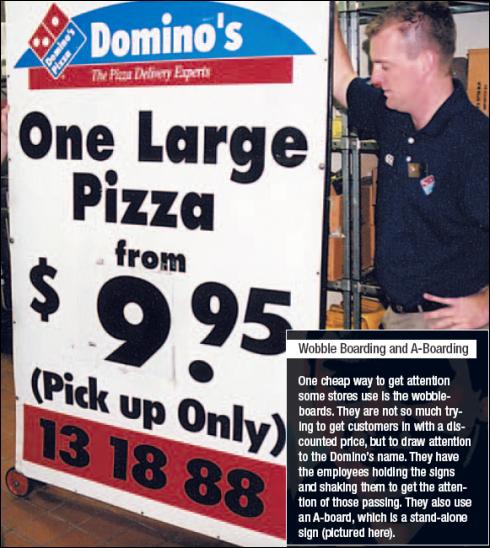 “We do a postal drop once a week,” says Ben Adams, regional director at the Hurlstone Park location in Sydney. “We send to about 7,000 addresses, which are retrieved from the central office’s database each week. The offers change about ever three to four weeks. We also use the direct mail pieces that look like letters that are sent directly to a specific address. Those work well, but are expensive.”

One of the things that is fueling Domino’s success in Australasia is delivery. Don says about 92 percent of all orders are delivered in 22 minutes. Wayne says that a huge success is delivering singles (one-run deliveries). “When we started running singles, sales jumped. We are running about 60 percent singles now and are shooting for 70 percent. Doing delivery this way gets the pizzas there in about 20 minutes. You have to have more drivers, but it is worth it. Base pay for drivers is $9.95 with $1.55 per delivery incentives.

“We wanted a reputation as a 20-minute delivery company. Drivers have to check the order, address, sign out the order and get to the car and this consumes a lot of time for multiple orders slowing delivery down for all of them. Rather than take longer with less drivers, I would rather see two drivers work the order faster. On weekdays, a small store (earning $12K a week) uses four to five drivers and large stores (earning $23K-$27K a week) use five to 10 drivers. For weekends, small stores staff six to seven drivers and large stores can have as many as 20 working.”

Because delivery speeds are important to the success strategy of Domino’s in Australia, a simple two or three station POS system would not be able to handle the volume. Most locations have at least four stations in the front of the store and three in the back, but many of the high volume areas can have as many as 10 to 12 stations in the front alone.

Lighted car top signs, which have been used for several years in the U.S., are starting to become a standard tool for Domino’s in Australia. They were tested in one location that has 12 or 13 cars running around delivering pizzas. “Customers started calling and saying they saw the car and ordered a pizza,” Wayne says. “We tried this earlier, but are just starting to do it again after more testing in selected areas. We get the signs from a company in the U.S.” 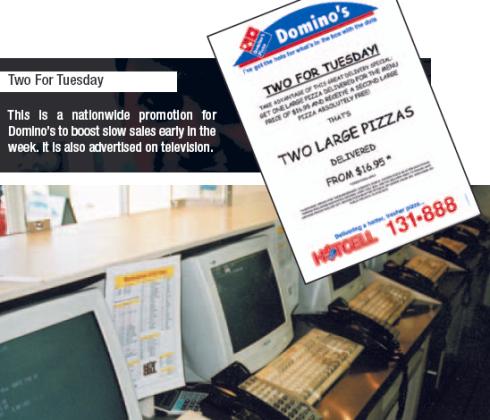 In Australia, people have the choice of many different types of food. Pizza can become a little mundane in the presence of the many other exotic looks and flavors so pizza stores have to find ways to put their name out there and make people remember who they are. In an area of the world where other chains have hit and missed with success, it appears Domino’s has found a way to capture market share. They know their target audience (18-25-year-olds). They know their products and how they want them marketed. They are focusing on their niche (delivery) and have a solid training and incentive program in place for employees and franchisees.

We’ll be keeping an eye on them to watch their success and see how well they do in the new markets they are targeting for the next year or two.