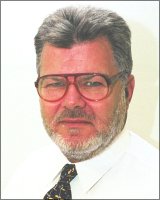 Question:
Why do I hear so much negativity regarding the use of par-baked pizza crusts?

Answer:
I think much of that negativity comes from the fact that par-baked crusts have been around and in general use for many years. This is the type of crust that puts frozen pizzas in the frozen food display case at your local supermarket. The fact that the crust is actually baked twice, once to par-bake it and once to finish the pizza, leads to significant loss of moisture from the crust. This results in a finished crust with a dry, flavorless eating characteristic. But, the two things that it is, without a doubt, is crispy and convenient.

A number of years ago I had the opportunity to study par-baked crusts to see if there wasn't something that could be done to improve its overall acceptance. What we found was that the low moisture content of the crusts was the real culprit. We found that the addition of certain gums (Ticaloid Lite, TIC Gums, Inc, Belcamp, MD Tel: 410-273-7300), or more recently, dehydrated potato flour, would improve the water absorption properties sufficiently so that after the second/final bake, the crusts had a finished moisture content similar to that of a fresh baked crust. The resulting finished crust was actually quite good in both flavor and textural properties. Today, there are a number of manufacturers using this technology to produce high quality par-baked crusts exceeding anything we previously had to work with as a par-baked crust.

Question:
From time to time I hear about eggs being added to the pizza dough. What is the benefit?

Answer:
Eggs, as either whole eggs or as egg whites, have been added to pizza doughs for many years, and for different reasons. Whole eggs can be added to the dough to provide better browning characteristics to the dough and to some extent also provide a richer flavor. Egg whites have been added to improve the crispiness of the baked crust. In this regard, both perform well, however, there are some drawbacks to their use, which might cause you to want to reconsider before running out and buying a case of eggs.

It is true that the addition of six large whole eggs (about 13.5 ounces) to 40 to 50 pounds of flour will improve the color of the baked pizzas to some extent, and the same can be said for the flavor too. It will be slightly richer tasting, but this will be lost in baking due to the overpowering flavors commonly used in making our pizzas. All things being equal, the crust color will be a little darker, but with the high cost of eggs today, it is difficult to justify the cost of eggs as a browning agent when sugar and whey (the dairy component) can be had at a much lower cost.

The addition of egg whites to promote a crispier crust has been done for many years, and to a great extent, it is effective, but again, it carries with it a pretty hefty cost. Typically, 2 percent egg white has been added to the dough to improve crispiness. This equates to one-pound per 50-pounds of flour in the dough. In most cases, we have found that the overall crispiness of a crust can be improved upon by simply allowing the pizza to bake a minute or so longer (a very low cost option).

Lastly, there is a major safety concern that must be addressed if you elect to use fresh eggs. It is much safer, from a food safety standpoint to use pasteurized, frozen egg products. But, even with these, certain precautions must still be followed to prevent any possible contamination of our pizzas or other products through cross contamination.

Question:
Out of all the things that can be done to prevent the development of a gum line, what do you feel is the single most effective action that can be taken?

Answer:
There are actually two very effective things that can be done, and these two things will probably address most of the causes of that feared gum line. These are 1) the application of oil to the surface of the dough skin before application of the sauce. This will help by creating a moisture barrier between the dough and sauce. 2) Correct baking of the pizza. Insufficient or short baking of a pizza sets the stage for a gum line to develop. By simply extending the baking time for your pizzas by a minute or so, you can generally bring about a significant reduction in the development of a gum line.

One other thing to keep in mind, when assessing a crust for a gum line, allow the pizza to cool on a screen or wire rack for two or three minutes, then tear the crust apart, do not cut it in the traditional manner. By tearing it you will be able to better determine the presence or magnitude of a gum line.

Question:
Is it possible to fully shape and freeze our pizza dough?

Answer:
Yes, it is. I'd suggest freezing the formed crust on a wire rack or pizza screen so you allow for good airflow to both sides of the crust, resulting in a faster freeze. Once frozen, the crusts can be stacked on a pizza circle up to five high and wrapped in stretch film or a plastic bag and held in frozen storage for up to 10 days. Be sure to mark the date of production on each stack of frozen skins so you don't lose track of when they need to be used.

To use the crusts, simply remove some from the freezer and place individually onto a floured tray or piece of parchment paper. The skins will slack out/thaw in 30 to 45 minutes. You can then dust the top with a little flour to facilitate handling, dock the crust as needed and transfer it to your oven peel or baking screen/disk for dressing and baking. In cases where you might be baking the crusts on a non-perforated disk, the dough can be transferred directly to the disk as soon as it is flexible enough to conform to the shape of the disk. The skin will still need to be allowed to completely thaw before dressing, docking and baking it. If you will be docking the dough while it is in/on your baking disks/screens, it is suggested that you use a dough docker with plastic docking wheels to prevent unnecessary damage to your disks/screens.

To learn more about dough management techniques and management of frozen dough, be sure to attend my workshop presentation at the New York Pizza Show (www.newyorkpizzashow.com) this November 2-3, 2004.