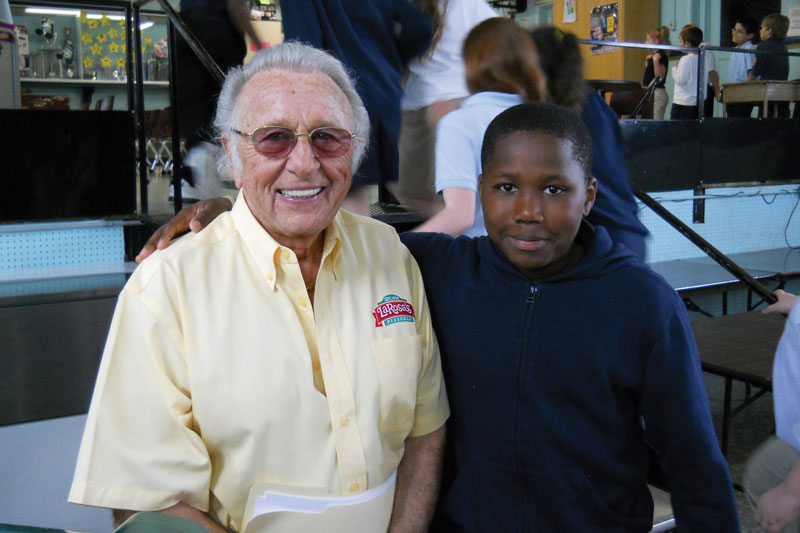 As a teenager, Buddy LaRosa probably rolled his eyes when his teacher asked the class to research and bring in a great quote from a wise or noteworthy person. But, like a good student, he did the assignment anyway and settled on a quote attributed to St. Jerome: “Good, better, best: Never let it rest ’til your good is better and your better is best.” 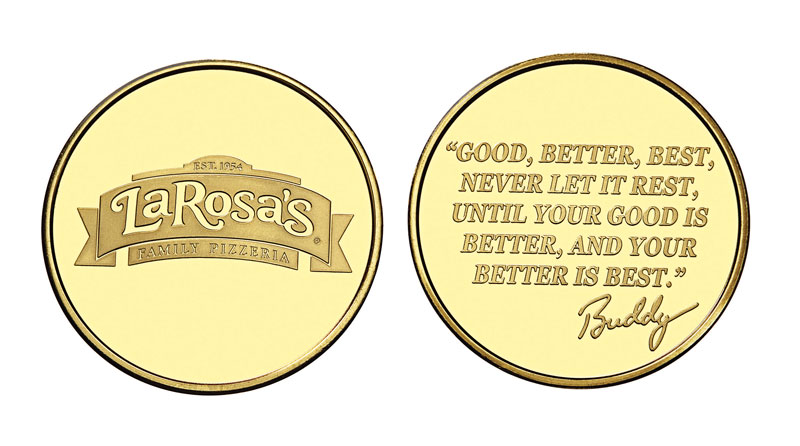 “The more people who have [Buddy’s] coins in their pockets…the more likely they are to fondly remember LaRosa’s.”
—Pete Buscani,
executive vice president of marketing, LaRosa’s

At the time, LaRosa couldn’t have imagined that he’d grow up to open a neighborhood pizzeria and become a successful entrepreneur—and a local legend. He couldn’t have known that the motto would become an integral part of his company’s business philosophy, one that his employees would know by heart. And he surely couldn’t have known that he’d be back in that same classroom years later, inspiring the next generation of eye-rolling teens by handing out special coins inscribed with that very motto.

Funny how things turn out. LaRosa is now a familiar figure in Cincinnati, both as founder of LaRosa’s Family Pizzeria, with nearly 70 locations in Ohio, Kentucky, Tennessee and Indiana, and as a motivational speaker at local school functions. “Whenever Buddy gives someone a coin, he makes them smile,” says Pete Buscani, LaRosa’s executive vice president of marketing. “And when he leaves, the whole room is smiling.”

LaRosa started selling pizza—made with his aunt’s recipe—at a parish festival in the summer of 1954. It was such a hit that he opened his own pizzeria, despite his Sicilian father’s skeptical warning: “You gonna sell pizza? Med-i-cans never gonna buy pizza from you.” Fortunately, father doesn’t always know best. Thanks to the quality of his pies and its founder’s entrepreneurial drive, LaRosa’s grew and grew, becoming a Cincinnati landmark. It was one of the first pizzerias in the Greater Cincinnati area to offer home and business delivery service—anything on the menu delivered anywhere in the city, just by calling one number.

LaRosa’s continues to evolve with the times. The company now has its own smartphone app and offers online ordering and digital coupons through its website, which ranks No. 48 on PMQ’s Top 100 Pizzeria Websites list. Additionally, LaRosa’s Strikeouts for Slices summer promotion has endeared the company to baseball fans throughout the area. Whenever Cincinnati Reds’ pitchers strike out 11 or more batters, everyone at the ballpark can turn in a ticket stub to receive a free small, one-topping pizza. LaRosa’s stores have given away hundreds of thousands of pies, with a retail value of more than $1 million, over the past several years, but company executives say the positive publicity from the promo is worth it.

Another promotion, the Buddy Card, is a popular neighborhood fundraiser. With one Buddy Card, the holder can buy any large pizza and get a second large cheese pie for free. Nonprofits, civic organizations, sports teams and school groups sell the cards for $10 and can keep $5 from each one sold. Additionally, the company solicits customer feedback on its website with the “LaRosa’s Listens” section, which lets customers rate their experience on a scale of 1 to 10 and leave comments.

Meanwhile, LaRosa himself has become a well-known fixture around the city. He visits local schools—including Roger Bacon High School, his alma mater—to talk to kids about starting a business and inspire them with his entrepreneurial spirit. To drive his message home, he needed something tactile, something the kids could take home with them. LaRosa’s partnered with Osborn Coin, a Cincinnati mint that specializes in custom designs. LaRosa’s commemorative coin, slightly larger than a quarter, bears the LaRosa’s logo on the front and the St. Jerome motto on the back. Buscani says the coins are well-received by the students. “It’s as if he’s handed out gold,” he says.

Each coin costs a little less than $1 to make, and only LaRosa or his sons, Mike and Mark—who now manage LaRosa’s day-to-day operations—can hand them out. The coins serve as LaRosa’s personal calling cards, providing students and adults alike with a tangible memento of meeting the famous pizza man. “From fundraisers to sponsorships, LaRosa’s supports the community it came from,” Buscani says. “Buddy spreads that message by spreading the coins. The more people who have those coins in their pockets and purses, the more likely they are to fondly remember LaRosa’s—and maybe get a little hungry for some of that delicious pizza.”

And who knows? Maybe the next Buddy LaRosa is at school right now, flipping that coin between classes, reading—and rereading—LaRosa’s motto.

Jim Wahl is a business-to-business marketing professional with Wahl Marketing Communications in Cincinnati.