The city that pizza built: How a pizza maker/real estate developer turned a struggling mill town into a thriving community. - PMQ Pizza Magazine 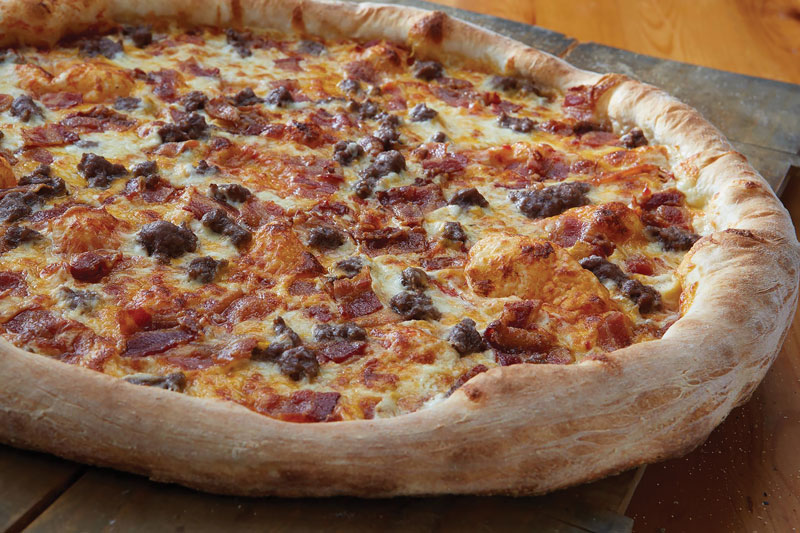 When Salvatore Lupoli was 15 years old, his father, who had been suffering from a prolonged illness, made him promise to make a difference in people’s lives. It’s a pledge that Lupoli has taken seriously over the years. More than that, it’s a proven business strategy that has taken him from owning a single pizzeria—the original Sal’s Pizza (sals-pizza.com) in Salem, New Hampshire—to becoming a New England pizza king and the largest owner of contiguous real estate in Massachusetts.

With about 40 restaurants and 4 million square feet of commercial property now under his control, Lupoli, the CEO and founder of Lupoli Companies, still doesn’t rest on his laurels—he continues to reinvest in the communities around him, particularly the once-beleaguered mill town of Lawrence, Massachusetts, and supports causes dear to his heart, including Habitat for Humanity, Little League Baseball, and other youth and veterans organizations. But it all started with pizza.

Linda Balles, a marketing specialist for Colony Foods, describes Sal as a man with “a very charismatic draw. Oftentimes, managers are so busy in their heads that they can’t be fully present for their customers. He doesn’t have that—he always loves feeding people. When Sal became a client of Colony Foods, we didn’t realize he had such a vision. He had a big vision. He invested [hundreds of thousands of dollars] to revitalize Lawrence, bringing a good quality of life to a depressed area.”

Maybe that’s because Lupoli hasn’t forgotten his own humble beginnings. Unlike some pizza pros, he didn’t inherit a family business—he built Sal’s Pizza from the ground up with his brother Nick, following a legacy of hard work as part of a family of immigrants from Italy. Or, as Lupoli’s grandfather, who came to the United States from Naples, used to tell him, “Not only were the streets in America not paved with gold, I was expected to sweep them!”

Six months out of college with a business degree, Lupoli opened his first Sal’s Pizza in 1990 as a quick-serve shop with low prices. “Besides the patience, energy and desire to succeed, we [relied on] a 19”, three-pound cheese pizza that we sold for $4.99,” he recalls. That was the top seller in the first Sal’s location and quickly became its signature pizza. Six years into the business, Sal expanded by creating a commissary to sell his pizza in schools, grocery stores and other commercial locations. (As salsforschools.com reports, the company’s pizza exceeds U.S. Department of Agriculture guidelines for the Healthy Hunger-Free Kids Act, making it easier to get into schools.)

“When we saw Lawrence, we didn’t see abandoned buildings. We saw 4,500 jobs. Before Lupoli’s investments, people did not talk about Lawrence in a positive light. We were the positive message coming out.”
—Salvatore Lupoli, Lupoli Companies

Expanding into real estate struck Lupoli as the next logical business move after his initial success in the pizza business. “If you don’t have a finish line, what are you striving for every day?” he says. “You have to have an exit strategy when you enter a business—not because you want out, but in order to measure your success. I thought to myself, what are the things that marry nicely with hospitality? Real estate. Property value always appreciates if you do it the right way. We had a great product—we just needed locations. The more locations I had, the more real estate I had.”

Lupoli’s quest for real estate led him to invest in Lawrence, the poorest city in Massachusetts, with the state’s highest unemployment rate and lowest income per capita. It was a risky venture, but, harking back to his family’s past, he was more than willing to take the gamble. “It had all the ingredients of a challenged community: abandoned buildings without roofs, marked with Xs,” he recalls. “When we came across the old mills in 2003, we looked at it as an opportunity, just like the challenges my family faced coming over as immigrants. We tackle things and try to do things outside the box. We don’t just talk the talk; we do it. Some people would say it could never be done, that we couldn’t climb that mountain. We wanted to climb that mountain.”

Lupoli purchased 10 dilapidated buildings in Lawrence, built his Sal’s Pizza commissary and a Salvatore’s location, and added housing, commercial property, even a fitness center. According to the Riverwalk Properties website, Lupoli’s company spent nearly $200 million in the process, and the run-down town, which once housed only 35 businesses, now boasts 200, plus an extra 4,500 jobs.

As a reminder of his vision for a brighter future, Lupoli proudly displays an old photo of his grandparents’ pizzeria on Revere Beach from 1940. “Only about 10 years ago, I realized my grandfather used to be in the pizza business,” he says. “He had [the pizzeria] for only about a year with my grandma and sold pizza for 15 cents.”

Family means a lot to Lupoli, who takes great care to hire employees that he can think of as family members—driven professionals with a similar work ethic and standards of quality. “A vision is not a vision unless it’s shared,” he says. “I can’t push my vision by myself—we have to agree on it.” His company’s website appropriately has a section titled “Careers” rather than “Jobs,” because he looks for employees who want to join him for the long haul. “This organization exists because of the employees,” he says. “You don’t have to share the same blood to be part of the family. Family comes from loyalty and respect and understanding.”

Lupoli rallies his staff members to greater success by asking, “If not you, then who? If not now, then when?” He adds, “I always encourage my employees to take opportunities and do their best. The challenge is that you have to have patience, and with patience comes the belief in yourself. When we saw Lawrence, we didn’t see abandoned buildings. We saw 4,500 jobs. Before Lupoli’s investments, people did not talk about Lawrence in a positive light. We were the positive message coming out.”

Aside from re-energizing Lawrence, Lupoli Companies has made a big difference in individuals’ lives, too. Pizzeria Napolitana, named after the Revere Beach pizzeria owned by Sal’s grandparents, only hires locally, Lupoli says. “This business is a grind,” he notes. “You have to do it for more than the money—it’s the impact that you make. People are able to buy homes because of the work we do. That’s a game changer.”

On a smaller scale, Sal’s also gives back to the community by supporting fundraising for local causes and charities. Through sals-pizza.com, organizations can apply for a special fundraising night. On the appointed night, customers with vouchers from the participating organization will have 15% of their sales donated to the cause, which means increased sales for the pizzeria while raising funds for the organization.

Lupoli’s pizzerias and real estate investments demonstrate how entrepreneurs can make a big impact through the power of pizza. “We created almost 4,500 jobs in the city of Lawrence in less than 10 years with $200 million invested,” Lupoli says. “I have yet to find a better success story in the poorest city in any state.”

And it all started with pizza. In fact, Sal’s Pizza, despite its considerable growth, still serves basically the same pies after 25 years. “Don’t change what you got there,” Lupoli says. “You can enhance it, but don’t change it. Over the years, we never changed the quality of the product. It’s the same cheese and tomato, practically the same flour and olive oil. One thing we did was change from a blended olive oil to pure oil. Why? Some people, when they expand, try to cut corners, but it’s our belief that we should bring the best product possible, even if it costs us more.”

Lupoli has come a long way from his days as a single-unit pizzeria operator in New Hampshire, but thinking of his family’s Neapolitan roots has kept him grounded for all these years. “Who you are is where you came from,” he says. “I look at my grandfather and remember that I was that man who came without a penny in his pocket. [My grandparents’] picture is in every one of the restaurants. It’s like my family is always watching me. I like that. It’s a reminder that I can always do better.”