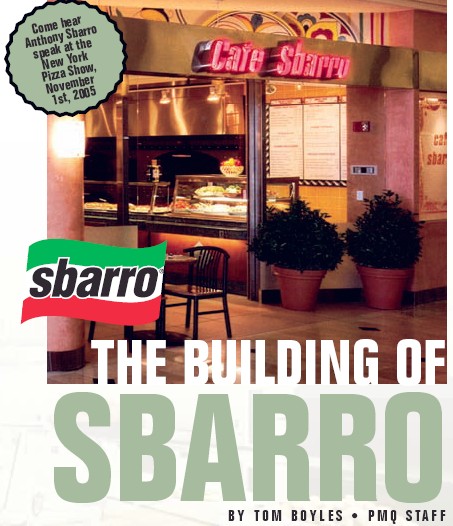 If you have ever been hungry in an airport or mall, chances are you have also walked in a Sbarro location. With nearly 1,000 locations scattered throughout 30 countries, Sbarro is, for the most part, responsible for carrying the New York slice concept from the East Coast and introducing travelers and shoppers to the convenience and tastes of traditional Italian food and pizza. It all started over 40 years ago in Brooklyn, New York.

On a recent trip to New York City, I called Joe Ferrara with Marsal & Sons, who has worked with the Sbarro family since the very beginnings of their pizza empire. We met with Anthony Sbarro, vice chairman, and Anthony Missano, president of business development, at the Sbarro corporate headquarters in Melville, New York. Anthony Sbarro, along with brothers Mario and Joseph, are the sons of founders Gennaro and Carmela Sbarro, who started it all. The first Sbarro Salumeria started in Brooklyn, New York. Today, Sbarro employs over 8,000 people, led by CEO Peter Beaudrault and a great management team. So how did they do it?

Sbarro first opened as an Italian delicatessen in Brooklyn. Sbarro became more and more popular and eventually opened a location in King's Plaza (a shopping mall). They soon discovered that people wanted sandwiches and pasta for consumption on-site. The seed was planted for their concept and the first redesign began. 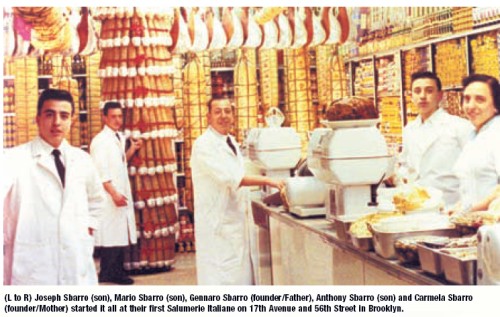 They expanded the "ready-to-eat" foods, such as pastas, salads, and ready-made sandwiches. It was just a natural event that people would come in and expect to see pizza among all this other Italian food, but at first they did not offer pizza. They decided to make some pizzas in a back oven and put them on a table in the deli. They couldn't make them fast enough, and that's when Sbarro realized their business was going to be mostly pizza. Pizza by the slice wasn't a new concept here because it was already popular in Brooklyn, but it was something unique to the rest of the country. With the expansion of the Sbarro concept, other places across the country would soon learn about buying just a slice and other Italian foods.

There wasn't a lot of selection or variety with food locations in malls in the 1960s and 1970s. There were snack people, like pretzels, ices, and cookies, but the expectations were very low for quality back then. People just wanted something fast.

The well-known shopping mall in Brooklyn, King's Plaza, was where Sbarro realized what the concept could become. There were pedestrians passing and lots of people wanting food. "We had a concept that we believed would get them to stop and walk in and grab a bite," Anthony Sbarro said. "This location (King's Plaza) was where we said, 'Here we have something.' So it was between 1967 and 1971 that the initial expansion really took place. There was no opening up ten locations at a time. Each location was extremely important. Providing quality was our number one goal. The family looked at it as, 'That's my name on there, and I'm going to deliver a high-quality product.'

"Merchandising was what we did best, we expanded to pastas and salads, and desserts," Anthony Missano says. "Our foods were displayed cafeteria-style. Our merchandising knowledge was used to display good-looking food, in addition to it tasting great. You could visually see that our product was fresh." 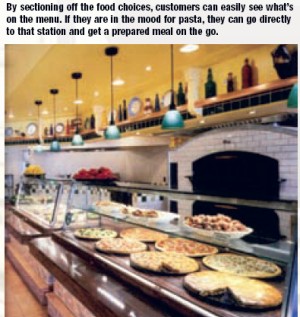 The first official franchise opened in the late 1970s. Sbarro had half a dozen franchisees between 1977 and 1980 that were interested in their concept. Back then, people didn't eat out nearly as often as they do today. If you wanted food fast, there were a number of places to go where you could get a burger or a hotdog. In the 1970s, what Sbarro did was to serve food that you could find in a nice sit-down restaurant. "Fast-casual style was really where we were operating 30 years ago, but we just didn't know it," Missano said. "We can give you really good high-end food, without table service."

Sbarro's focus was that they had plenty of quality food other than pizza. Kids want pizza, and the mom and dad want a salad and pasta.

Sbarro opened up an inline restaurant with a 35-foot counter. When people would walk by and see one item after the other, they grabbed friends and pulled them over to show them what was on display and the lines started forming. 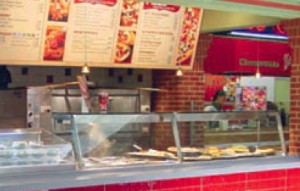 "We are now in 30 countries. When we had gone out into the other markets (West Coast, foreign countries), not everyone was familiar with the products like tortellini and fettuccini. The only familiar Italian foods for many people were those they knew from the frozen food market, and that is what people related Sbarro to…what they saw in the supermarket. Everybody here in New York knew spaghetti and meatballs and lasagna because it was familiar products, which were comfortable to us, but unfamiliar to certain parts of the country. It was pizza that made it user-friendly. Once people realized that it was a pizza place and they could get pizza by the slice, or a whole pie, they loved it. We do a 17" pizza with six slices, so it's a nice size."

Malls, universities, toll roads, movie theaters and even casinos realized that branding is very important, even in the foodservice area. So, just as they branded their beverage products, they have branded their foodservice products.

"It's always been our niche to be there as a place to grab a bite to eat while you're busy doing whatever you are doing," Missano said. "You will find our locations in malls, airports, universities, movies theatres and hospitals. Our idea is to bring our product closer to where people live."

When the new idea of the food court came up in malls, Sbarro had to move their big 3,000 square-foot idea to a 700 sqaure foot design that could still be a success. The conversion to food courts created more opportunity for growth.

Sbarro is working on bringing a Casual Dining concept outside the mall and airport environment with a stand-alone concept. This concept is called Carmela's. They don't want to just be a choice while you're traveling or shopping in a mall, but a part of a daily routine in the neighborhood where you live. The concept is now in the testing phase and development. 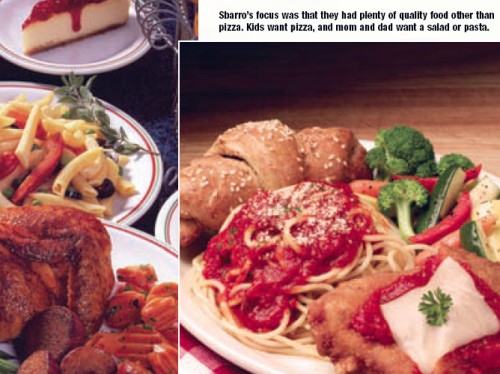 In places like malls and airports, there isn't much need for outside marketing…people are already going to be there. Their marketing efforts are put into their products, quality and design.

Sbarro says to be successful, you really need to give your consumer a compelling reason to come to your restaurant, whether it's the cleanliness, the quality, friendliness, the product and everything in between. People want hot food to be hot and want cold food to be cold. They want someone to be tending to their needs; an extra plate, a booster seat, the environment and music. Being a good host is most important. Welcome them into your business like they are family members coming through that door, not a customer. That would be a compelling reason to come back.

"We recently tried something with the Atkins diet," Missano said. "We created a low-carb pizza and made it available nationally for people who wanted to watch their carbs, but wanted pizza. It was a good product. Our concept stays intact, but for the person that desires something different, we go the extra mile. Don't convert your entire menu to a trend, but maybe introduce a couple of new items that keep all of your guests happy."

Anthony Sbarro will be speaking at the New York Pizza Show on November 1, 2005. Come hear him and other members of the Sbarro family tell of the beginnings of the Sbarro brand, how and why they chose to expand and where they are going. This is one of the country's landmark and legendary pizzerias, and the New York Pizza Show is the only place you will get the opportunity to hear the story directly from the family that carried the New York pizza concept out of New York and across the globe. Don't miss it – and while you're there, drop in one of the Sbarro locations on Times Square and experience a New York legend.