As the weather turns warmer, are you losing potential dessert customers who visit the treat shop down the street after a meal at your place? Maybe you already run a successful dessert program but want to further increase sales and differentiate your pizzeria. Whether your business offers dine-in, delivery or takeout, you might want to think about the possibilities of Italian ices, gelato and sorbet. “It’s important for a restaurant to offer an experience, and no dining experience is complete without desserts—they can even emerge as a star of the menu, leading to repeat visits,” says Jillian Hillard, marketing manager at PreGel America in Concord, North Carolina. “Gelato and sorbet make sense in the pizzeria because they’re both Italian foods, and they’re considered lighter and healthier dessert fare—a huge selling point in today’s health-conscious society.”

Meanwhile, Italian ices are ubiquitous in Northeast pizza shops, but in other places they can offer a point of differentiation, as Joseph Cappillo, owner of Slice-N-Ice (grovepizza.com) in Miami, found when he opened shop in the ’90s. “At first, no one here knew what Italian ices were—we had to explain them to people,” he recalls. “Where I grew up in New York, though, I saw people making a fortune off Italian ices—I’m surprised that not every pizzeria carries them!”

Thinking of adding ices, gelato or sorbet to your menu? We spoke to several operators and industry insiders to get the scoop (pun intended) on what it takes to offer these treats and how you can make sure they help attract and retain customers.

Unique desserts, such as ices, sorbet and gelato, can raise your ticket averages in a way that other food items may not be able to. “If you have pizza and want to add pasta, you’ve changed only the item, not the ticket value—but if you sell pizza and add gelato, you’ve increased the ticket value,” notes Christine Cogliano, CEO of Dolcefine Gelato in Baltimore. “At an average of $3 per serving, just 10 people a day ordering would add thousands to your annual sales—and imagine in the warmer months when you serve even more!”

In addition, some customers will seek out your shop solely for the treats. “People who have never eaten our food come here just for our Italian ices,” says Rob Priskie, who co-owns Pakula’s Pizza in New City, New York, with Matthew Weiss. “Families will come three to four times a week and eat them on our bench outside.” Priskie obtains his Italian ices from a local maker and offers them in the warmer months, about six months out of the year, but claims that the ices have a significant markup—a $1.95 cup costs him only 25 cents, plus the labor needed to scoop it, making the ices a highly profitable item. 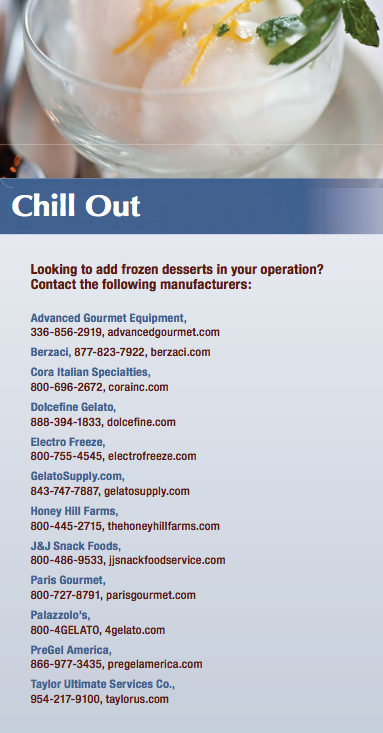 By contrast, Stefano Bertolotti, owner of BadaBing Pizzeria (badabingpizzapasta.com) in League City, Texas, says that he’s still trying to recoup the initial investment made for the gelatos he sells, because he makes them in-house with a machine that cost $20,000. “Still, we want our customers to feel comfortable here and establish a trust with them,” he explains. “It’s not for everybody to make their own gelato—it’s a total commitment, and you have to know what you’re doing. Still, is there anything more rewarding than making someone feel good at your establishment?” (For more information on the logistics of selling frozen desserts—sizing, flavor choice and in-house vs. premade, see the sidebar “Working Out the Logistics” on page 25). Though some owners, like Priskie, have chosen to sell only seasonally, many find that sales of frozen desserts stay steady throughout the winter. Brian Lackey, co-owner of the Pizzeria Venti (pizzeriaventi-atlanta.com) franchise in Atlanta, offers seasonal favorites (such as pumpkin spice) that are very popular with his customers. “Our gelato sales stay steady or even increase in the winter,” he says. “Most other ice cream shops close up for the season, but people still want these treats.” Dan Rokas, who owns Zesty’s Pizza (zestypizzachelmsford.com) in Chelmsford, Massachusetts, with his father, Ted, also verifies that his gelato sales, even in the middle of a New England winter, were steadily increasing for 2011. Depending on your location and your customer base, you might want to consider offering them year-round.

No matter what the season, you’ll want to market your gelato, sorbet and Italian ices creatively to get people to try them—after all, if the product is high-quality, they’ll be back for more! First of all, says Hillard, educate your customers, as not everyone is familiar with gelato, sorbet or Italian ice. “We always suggest sampling,” she advises. “Get outside of your establishment and have passersby try it, or go out to community events with a cart and promote your desserts.” You may even be able to receive marketing materials from the companies you purchase from, whether you’re getting ingredients to make your own or purchasing premade.

On the other hand, if you’re purchasing from a nearby artisan, you can work the local angle. Matt Galvin, co-owner of Pagliacci Pizza (pagliacci.com), based in Seattle with 22 locations, purchases from a local Italian woman and fi nds that the authentic artisan product fits perfectly with his hand-tossed pizza. “It’s a high-quality product, and we support a local artisan business,” he notes. “It’s a nice way to partner up—and, from an operational standpoint, it’s very easy to add on; all we need is a freezer to hold the pints.” He promotes the product through the business’ website and call center; offers buy-one-get-one-half-off specials about three times per year; advertises on box toppers; and mentions the gelato in the Pagliacci newsletter.

For current customers who are already familiar with your product, email marketing is an effective way to get them in the door to try your latest flavors. “At Paolo’s Gelato, we started a Flavor Alert; customers sign up online and we email them weekly with the flavors of the week,” says Paolo Dalla Zorza, owner of Paolo’s Gelato in Atlanta and GelatoSupply.com. He agrees that sampling is also very effective, but don’t just give them a taste and walk off. “Start a dialogue with your customers,” he suggests. “Talk to them and ask them about the flavors—if you listen, you will thrive.” Priskie has also found that rotating flavors keeps customers interested and keeps them coming back. “We offer four flavors all of the time, plus two flavors of the week; a sign on the inside above the counter tells customers what we have, and we gauge the responses for each,” he explains. “When people ask for certain ones, we promise customers we’ll have that flavor next week, so we use it as a tool to drive sales.” You can use social media in a similar way, letting customers know through Facebook, for example, what you have every day, and taking requests on your page, thus creating additional interest and traffic both in-store and online.

Lackey has generated sales for his gelato through many of the above tactics. Using the Internet, email and social media, he offered a free gelato on July 4th last year if the customer mentioned how he found out about it—through Twitter, Facebook, email newsletter, blog, etc. He maintains interest by offering a gelato of the month and hooks his younger customers by offering gelato as part of every kids meal. The efforts must be paying off—he won an award for the gelato in the Best of Atlanta 2010 by Metromix.com and, more importantly, has lured customers to his food menu. “Gelato draws people into the restaurant for the first time,” he says. “We’ve had people come by just for dessert when they were eating nearby or searching ‘gelato’ on the Internet—but they came back shortly thereafter to try our pizzas and pastas.”