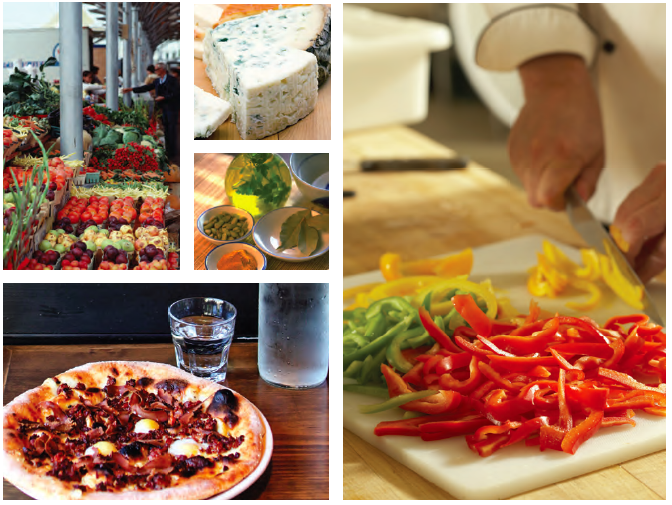 With Neapolitan-style and artisan pizza resurging these past few years, high-end pies are becoming a new foodie favorite. But, as more operators across the country continue to search for the freshest ingredients and even lay brick for their own wood-fired ovens, PMQ asks: What really makes an artisan pizza? Expert pizzaiolos agree that the contemporary meaning is subjective, but ultimately, “artisan” relates to the quality and/or uniqueness of ingredients and the maker’s attention to detail. Thus, if you take pride in your work, don’t count yourself out of the artisan world. Even if your menu’s top pie is a classic Margherita—the tomato, basil and mozzarella combo, once a Naples peasant food—remember that an artisanal touch is always within reach. You may also want to consider going artisan by simply introducing top-notch and/or local ingredients.

The artisan trend comes on the heels of the gourmet pizza explosion headed up by Wolfgang Puck in the ’80s—but gourmet and artisan can go hand in hand. John Arena, co-owner of Metro Pizza (metropizza.com), with six locations in the Las Vegas area, is known as a professor of pizza—he teaches a class on the history and culture of the food at the University of Nevada at Las Vegas—and when it comes to defi ning “gourmet,” he points out there are two things to consider. “I think the definition of gourmet is changing,” Arena says. “At one point, gourmet was determined by ingredients that were considered to be out of the norm. Now, it’s also a reference to the actual quality of the toppings. This has filtered back to Italy, where pizza makers are being more experimental and aren’t simply making the same four pies anymore.”

Back to the Source

As Arena notes, gourmet ingredients are not inherently local—you simply must honor the pie itself and find the freshest and most interesting ingredients. If you’re making a traditional Italian sausage pie, you may want to import real Italian sausage. If you want to use a unique cheese crafted by a small producer, however, you may look to a local cheesemaker instead. But there’s a reason local ingredients often fi ll artisan-style menus: Using local produce and meats often brings a unique twist to your flavor profile. “There’s so much hype around artisanal pizza right now that we make everything from scratch and use carefully sourced ingredients,” says Martha Hoover, the chef and owner of Napolese (cafepatachou.com) in Indianapolis. “You find so much variation if you use locally made sausage and pepperoni, but ingredients such as mozzarella and tomatoes are more equalized.” Hoover uses local meats for pies including the Hamaker’s Corner, a pepperoni, Italian sausage, mushroom and provolone pie; and the Meridian Kessler, a similar pie minus the pepperoni. These popular menu items use toppings from their namesakes’ neighborhoods, adding to their menu appeal. However, she also works with regional and national suppliers to ensure the quality of every ingredient.

Local produce and meats also inspire Paulie Gee, owner and founder of Brooklyn’s Paulie Gee’s (pauliegee.com) pizzeria. “We have a rooftop farmer in our neighborhood, and I use those products whenever I can,” he notes. “Sometimes it’s challenging because the supply is limited, but I think it’s really starting to catch on. I get my smoked meats from the best purveyor in New York, and a local artisan makes the best fresh mozzarella. I don’t have to worry if there’s anything better out there!” While Gee touts New York’s finest ingredients, this Brooklynite obtains his tomatoes from an unnamed source. “I get what I call ‘secret source’ tomatoes,” he points out. “The only time it’s an issue is when the boat gets caught at sea. One time, Homeland Security backed us up, and I had to go halfway to Philadelphia because I couldn’t stand any substitute.” The top-selling pies on the Paulie Gee’s menu are the Regina, his take on the Margherita; the Del Boy, with grated Parmesan and Italian tomatoes; and the Greenpointer, named after his pizzeria’s neighborhood and topped with baby arugula, olive oil, lemon juice and Parmigiano-Reggiano.

Quality ingredients mean higher food costs, but that doesn’t mean profit margins must shrink. Your markup has to reflect what you’re doing, so treat your food like a work of art to boost sales—make your customers want to eat and see your pies. “You can’t treat your product like a commodity, or else the guy with more buying power is always going to win,” Arena notes. “When you acknowledge the customer and the value of your pizza, you can have much more latitude.”

For instance, customers can get pepperoni anywhere, so it’s important for independent operators to distinguish themselves in both quality and aesthetic appeal. And high-end pizza has proven to do well during the recession because consumers want a quality meal without going broke. At Napolese, for example, an individual pie ranges from $10 to $14, and Hoover’s customers think that’s fair. “People seem to know what they are getting and are willing to pay a premium price for a premium product,” she says. “We have a really eclectic and diverse market here, with an affluent and educated clientele. We even have people say, ‘That isn’t burn on the back of the crust—it’s char!’”

With an affordable price point and eclectic ingredients, you may also find your base customers are 18-to-34-year-olds. Arena notes that in his experience, generally this younger demographic creates the core of the gourmet pizza market. “If they’re young and media-savvy and they’re keeping up with what’s going on around the world, they’re going to want to try different ingredients,” he says. “Younger people tend to be more comfortable with melding of cultures, too, so they’re OK with the melding of Italian, Asian and Hispanic flavors.”

Going artisan is more than a way to boost profits—it’s a way to flex your culinary muscles. Pizza has proven valuable to the consumer in this down economy, so if you have a pizza-savvy population and the right connections to fi nd quality ingredients, taking the pizza high road is an investment that will attract loyal customers looking for an affordable date night or special occasion meal. Going local can create a unique product, but make sure you have a constant supply before designing any of your menu’s staples around these ingredients. But, most importantly, educate your customers when they come in the door; it might just help build a following of loyal pizza loving foodies. 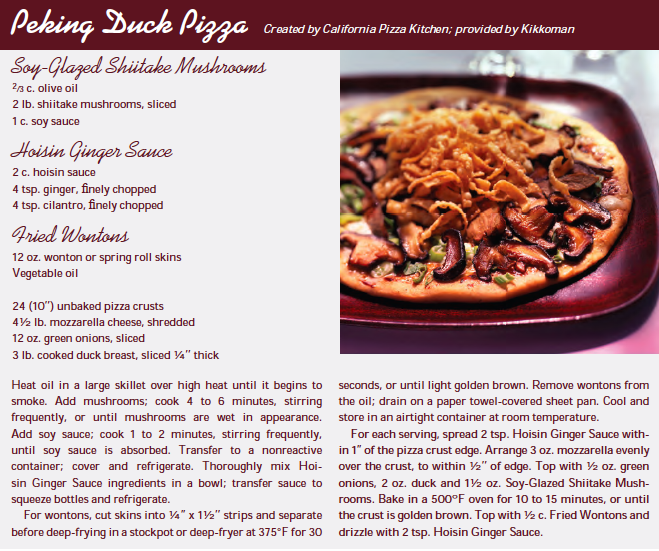