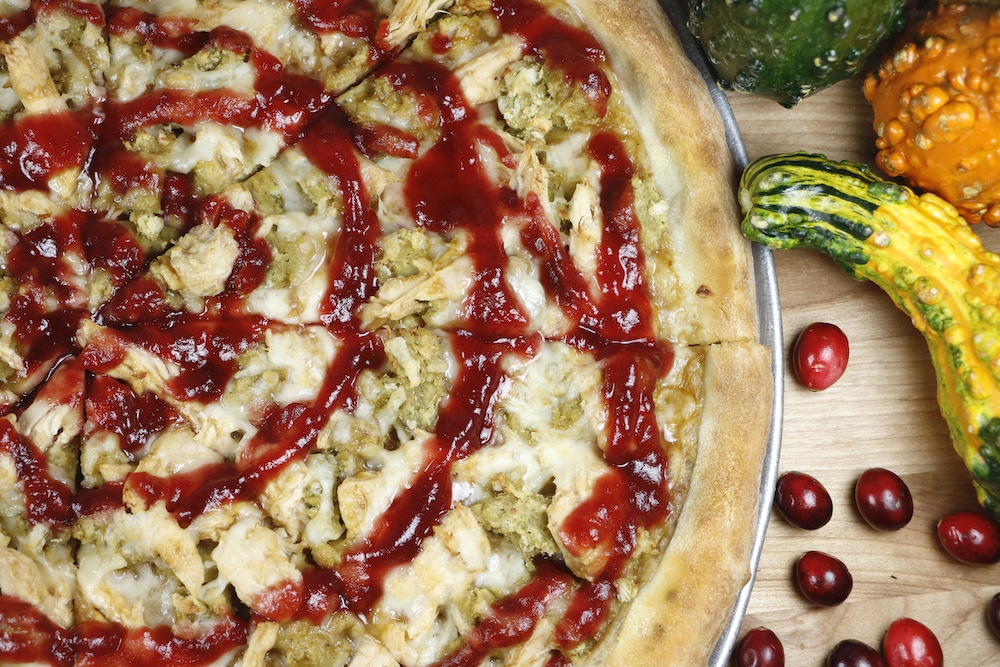 Grotto Pizza brings back The Gobbler for Thanksgiving.

Pizzerias around the country are gearing up to serve a Thanksgiving feast with a twist—pizzas topped with traditional Thanksgiving foods such as turkey or chicken, stuffing and cranberry sauce.

Grotto Pizza, headquartered in Rehoboth Beach, Delaware, has brought back The Gobbler, which comes loaded with roasted chicken, stuffing, turkey gravy, a blend of cheeses and a swirl of cranberry sauce.

Available at all 22 Grotto locations in Delaware, Maryland and Pennsylvania starting on November 9, The Gobbler is priced at $18.99 for a 12-inch pizza and $21.99 for a large 16-inch.

Fellini Pizzeria, with two locations in Providence and Cranston, Rhode Island, started taking orders for its Thanksgiving pizza on Tuesday, October 13, and had already sold out by the next day. The pizza, which features slow-roasted turkey, homemade mashed potatoes, stuffing and gravy, served with a side of cranberry sauce, can be picked up on the day before Thanksgiving.

To kick off October, Fellini Pizzeria also offered a Pumpkin Pizza topped with oven-roasted chicken, fresh spinach, bacon, caramelized onions, a housemade pumpkin sauce and a drizzle of honey, described as “a perfect balance of sweet, salty and savory.”

For past Thanksgiving holidays, The Pizza Joint in El Paso, Texas, has offered The Feast, a pizza topped with deep-fried turkey, mushroom gravy, green beans, stuffing and, after the bake, a few dollops of cranberry sauce. “I always tell people to imagine the pizza dough as your dinner roll,” the restaurant’s owner, Mel Maese Goldberg, told Good Morning America last year. “Pizza goes with anything.”

In Holyoke, Massachusetts, Capri Pizza brings back its Thanksgiving pizza each year in a 10-inch size for 14.95, a medium 16-inch for $14.95 or in two slices for $6. And pizza-loving Texans can try a Thanksgiving pizza from Austin-based DoubleDave’s Pizzaworks. It’s made with diced turkey, stuffing, brown gravy, onions and mozzarella along with a tangy cranberry sauce on top.