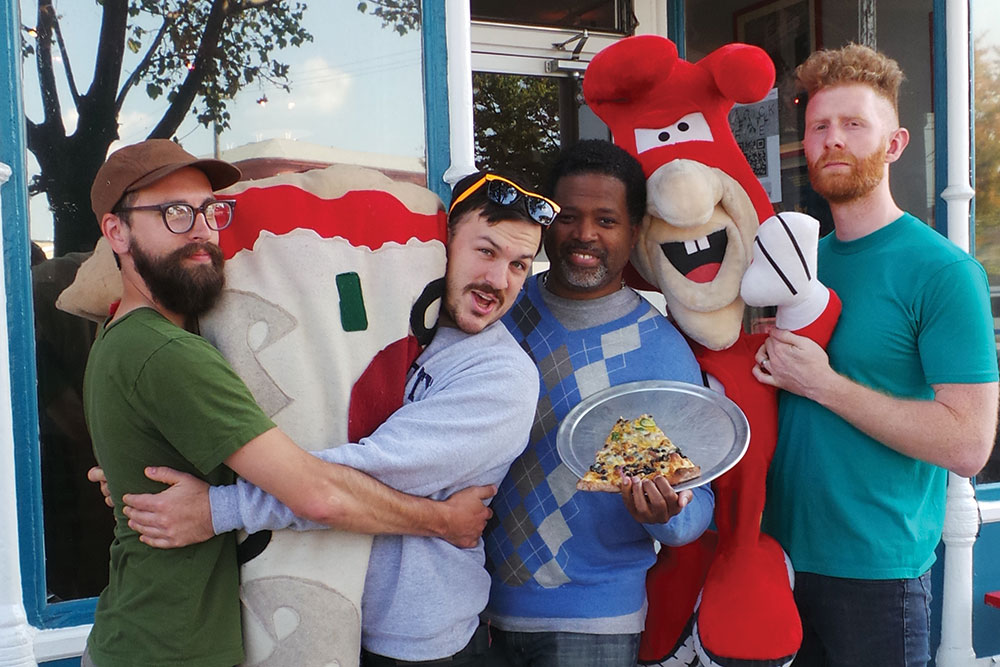 For many, the words “pizza museum” conjure up visions of long, echoing hallways that open to a grand atrium filled with freeze-dried versions of the first Margherita pizza. But at Pizza Brain (pizzabrain.org), the world’s first pizza museum, patrons find a museum/pizzeria hybrid that marries delicious pies with more than 50 years of American pizza pop culture in a casual neighborhood pizza joint.

Located in a small neighborhood a couple of miles from the famous Rocky steps in Philadelphia, locals come to Pizza Brain for the award-winning pizza and stick around to peruse curated displays of an ever-changing collection featuring the zaniest pizza memorabilia this side of the Hudson River. “There are so many items that we’ve collected, we can’t display them all at once,” says co-owner Michael Carter. “We display only around 25% of the collection at any given time. And it’s not just collectibles. People really love pizza, and they make a lot of digital images incorporating it, too, which we showcase on our website and display on our walls.”

Pizza Brain’s story began with a bunch of friends putting together an art show celebrating America’s culture of pizza. A year later, co-founder Brian Dwyer had earned a spot in the Guinness Book of World Records for collecting 561 pizza items. He also teamed with three like-minded friends to create a pizzeria, which, in addition to serving an assortment of red and white specialty pies, would celebrate all things pizza-related. Now on the cusp of its two-year anniversary, Pizza Brain’s collection of memorabilia, and its customer base, continues to grow.

The concept of a pizza museum was what initially brought partners Brian Dwyer, Michael Carter, Ryan Anderson and Joe Hunter together, according to Dwyer. “It was the fascination of trying to create what we understood to be the only pizza shrine—or pizza culture museum—that exists,” Dwyer says. “As far as we could tell, nothing brought all of these different items together and celebrated the American culture of pizza. It’s really a hybrid of the two now; it’s mainly a pizzeria that houses a pizza collection, but as we grow as a business, our vision will continue to grow.”

“Virtually everything that you can think of that can be made has been made with pizza in mind or in front of pizza or with pizza as the subject. We’ve stumbled upon a wealth of collectibles.”
—Michael Carter, Pizza Brain

A Wealth of Collectibles

While some may wonder how it’s possible to find enough pizza memorabilia to start a museum, Carter and Dwyer say pizza is everywhere in American culture. The partners add to the collection through online purchases; flea markets, thrift stores and garage sales; and even by way of gifts from fans of the pizzeria. “Virtually everything that you can think of that can be made has been made with pizza in mind, or in front of pizza or with pizza as the subject,” Carter says. “We’ve stumbled upon a wealth of collectibles.”

When you walk through the doors of Pizza Brain, it quickly becomes evident that pizza is, in fact, a major cultural touchstone. From the walls and ceilings to cutouts in the floors and drawers that hide surprises, pizza memorabilia fills the space, reminding all who visit how pervasive pizza is in our everyday lives. Through vintage print ads, toys, movie posters, television show references, albums, old photographs or neon signs, there’s pizza to see around every corner—even in the restrooms. The covers of vinyl records adorn one wall, including the soundtrack to Mystic Pizza and a holiday music album from Domino’s. Flashing lights illuminate a large Teenage Mutant Ninja Turtles arcade game called Pizza Drop, while toy Ghostbusters—still in their original packaging—devour pies and an illustrated Smurf enjoys a slice. Nancy Cartwright, the voice of Bart Simpson, signed a script of The Simpsons for Pizza Brain, while John Kricfalusi, creator of Ren & Stimpy, contributed an original signed drawing. One of the more unusual items on display is a toilet seat bearing the image of a rather menacing-looking pizza with eyes and a mouthful of teeth.

“We didn’t set out to be the world’s first pizza museum,” says Dwyer. “We just wanted to open a pizza shop that celebrated this culture. But when we kept unearthing more and more [pizza-related] ephemera, it really started to open our eyes to a culture that the world hasn’t paid much attention to. People are so familiar with pizza that they don’t really view it in the way that we’ve started to put it under a microscope. It’s easy to overlook the fact that it’s been a huge part of American culture over the past 60 years.”

“We’re not the first people to celebrate pizza culture. We just want to be one of the main facilitators of it,” Dwyer adds. “We want to celebrate it with artists and the community that loves pizza as well as everyone else who may not think of pizza the way that we do. We didn’t grow up imagining we’d open a pizza shop, and yet here we are. We saw a need and said, ‘Well, if no one has done it, let’s fill that need.’”

Opening a pizza museum came with a fair share of pressure, mainly because those who visit expect pizza that blows other pizzas out of the water. “We knew right out of the gate that if we were going to be a pizza museum and serve pizza, it had better be damn good,” Dwyer says. “So a large part was figuring out how to make a pizza that was deserving of a pizza museum.”

“Our friends all told us, ‘You’ve gotta have great pizza with all the hype you have,’” Carter recalls. “We really worked hard to have great pizza, and there was a lot of pressure. After we opened and people tried the pizza, we received a lot of awards, and that also puts the pressure on, because you don’t want to slip. So there’s pressure to live up to initial expectations, and then there’s also the pressure to keep making great pizza.”

Head chef Joe Hunter created and executes the Pizza Brain menu, which offers standouts such as the Charlie Mayfer, a white pie with mozzarella, sweet potato, Honeycrisp apple, honey goat cheese, brown sugar, pecans and pie spice; the Lucy Waggle, another white pie topped with mozzarella, Grana Padano, pine nuts, fresh thyme, sweet date, crisped prosciutto and arugula; and the Kira Tierston, a red pie with mozzarella, smoked bacon, a hint of brown sugar, red onion and oven-roasted Brussels sprouts. “We asked a lot of questions and did a lot of research when putting the pizzeria and museum together,” Carter says. “Running a business has its challenges, but my hat’s off to Joe for the pizza and the menu.”

Dwyer says Pizza Brain gets visitors from all over the country, some claiming to hail from cities that have the “best pizza.” “To say there’s a best pizza, I think, is a weird idea,” he says. “It’s like saying there’s only one mountain to climb. I think that’s the beautiful thing about pizza. It can take so many shapes. It can be $2 on a paper plate at a curb or $50 with a bottle of wine, and all those things in between are also pizza. We celebrate all of that. We’re not celebrating Pizza Brain here; we’re celebrating pizza.”

Customers and the media seem to appreciate their efforts. Famous fans include the rock band Neutral Milk Hotel and Wayne Coyne, frontman for the Flaming Lips. Philadelphia’s Thrillist named Pizza Brain one of the “Coolest Bars and Restaurants in Town,” and a Philadelphia Magazine readers’ poll in 2013 declared Pizza Brain to have the best pizza in the city.