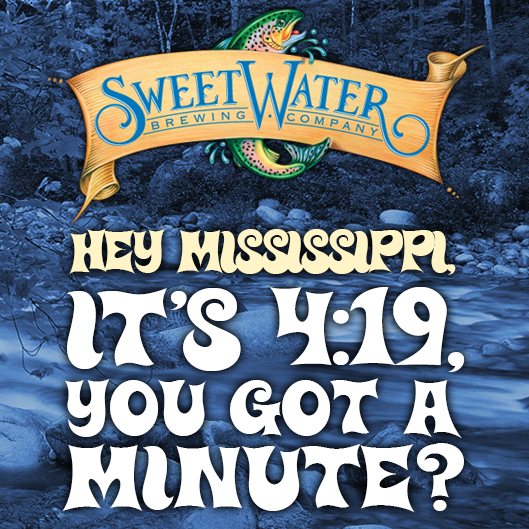 SweetWater Brewing Company continues to make moves westward with the announcement it will open up distribution to the Magnolia State later this summer. Shortly after the brewery’s $19 million expansion, SweetWater – ranked as one of the nation’s top 20 craft breweries according to the Brewer’s Association – will be bringing its lip-smackin’ lineup to the area starting in early September.

"I can’t tell you how excited we are to finally begin flowing in Mississippi,” said SweetWater founder and big kahuna, Freddy Bensch. “This one took a little while for us, but with our new fermentation tanks online and the expanded brewhouse rocking and rolling, our tasty beers will hit Mississippi shelves and taps just in time for college football to kick off!”

SweetWater will bring their notoriously hoppy ales to the area starting with its flagship, 420 Extra Pale Ale, IPA, Blue and Take Two Pils on draft alongside bottles, cans and Tackle Box variety packs in off-premise grocery, package and s bottle shops including:

420 Extra Pale Ale – SweetWater’s 420 is a West Coast style pale ale with big hops and a crisp finish. First brewed on April 20, 1997, 420 is extremely well-balanced which makes it a perfect introduction to a new town – that’s why we say “drink ‘em if you got ‘em!” Rolling out in 6-pack bottles, 12-pack cans and draft.

 SweetWater IPA – This mammoth India Pale Ale (IPA) is dry-hopped to the gills delivering a kick-you-in-the-teeth hop chop. The brew is unfiltered to leave all the natural flavors intact. SweetWater IPA won first place in a blind tasting against 15 of the best IPA’s in the country held by The Atlanta Journal-Constitution. Rolling out in 6-pack bottles, 12-pack cans and draft.

 SweetWater Blue – SweetWater Blue is a unique, lighter-bodied wheat ale enhanced with blueberries. This ain’t no fruit beer, but it is our breakfast beer, and perfect for hanging on a warm Mississippi day. Rolling out in 6-pack bottles and on draft.

 Take Two Pils – A golden blonde German pilsner brewed with spicy floral hops and a head-first trip down the rabbit hole of lagers. Call us in the morning! Rolling out in 6-pack bottles and draft.

A crew from SweetWater will taste their way around the area with sampling celebrations and sponsored events kicking off the week of Sept. 8 in Jackson, Gulfport and Biloxi areas, and the week of Sept. 22 for Northern Mississippi. For the full schedule and participating locations, visit SweetWater’s Facebook Page. Online fans can wet their whistles too by following the brewery’s Mississippi Facebook page for details on how to enter SweetWater’s “Catch a Trout Tap” contest rewarding the first locals to spot their tap handles with free SweetWater Schwag. To learn more about SweetWater Brewing Company and its full lineup, visit www.sweetwaterbrew.com.