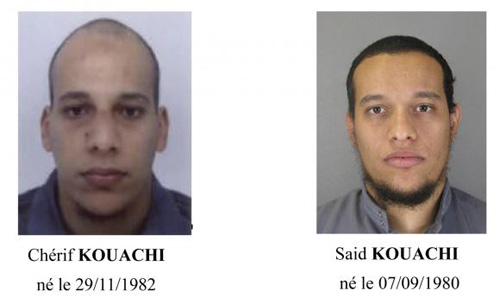 One of the suspects in the barbaric terrorist attack on a French newspaper is a former pizza delivery man whom associates described as a nobody.

Reuters.com reports that 12 years ago, one of the two brothers suspected of the shootings at satirical weekly Charlie Hebdo was a young man like many others in France, more interested in girls and smoking dope than defending the Prophet Mohammad.

But between 2003, when Cherif Kouachi delivered pizzas and dreamed of being a rap star, and Wednesday, when he and his brother were named chief suspects in the killing of 12 people in Paris, the French national went from punk to most wanted.

Kouachi, 32, is being sought along with his older brother Said, 34, at left, in a manhunt following what President Francois Hollande called a terrorist attack of "exceptional barbarism" against journalists and two police officers.

Read more about the evil evolution of two Islamic radicals.