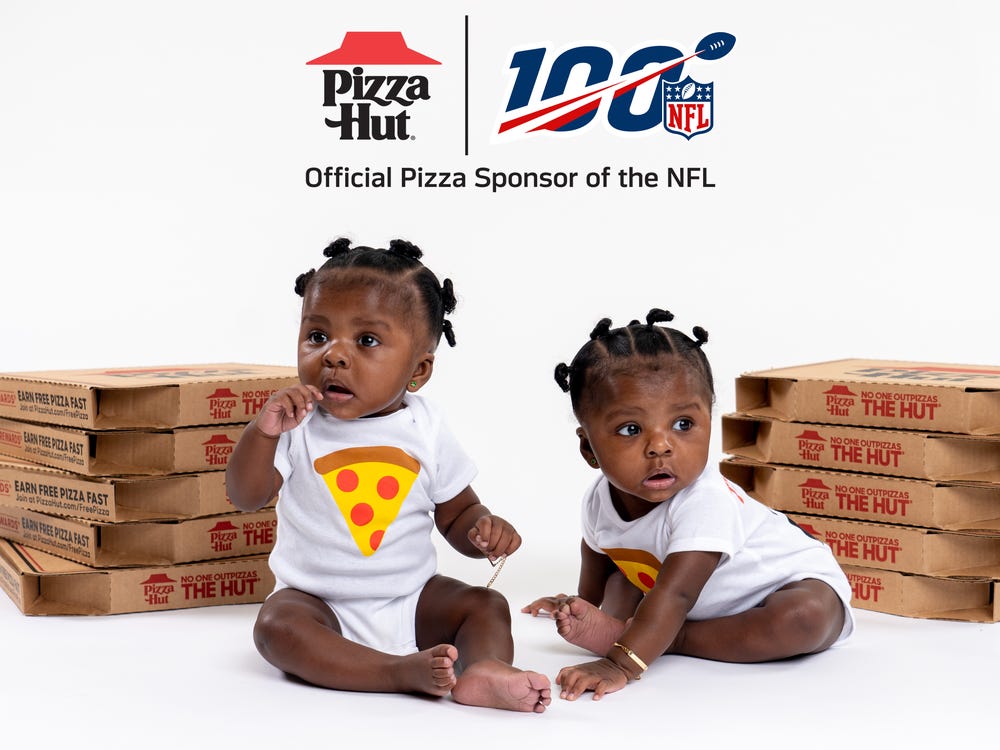 Pizza Hut will double down on its NFL marketing this year with a promotion focused on Super Bowl twins, rewarding the first family to welcome twins after the big game’s kick-off.

The winning family will receive two years of free pizza, a trip for two to next year’s Super Bowl, and, in honor of Pizza Hut’s BOOK IT! program that promotes literacy, $22,000 to start an education fund for the first Super Bowl twins and a custom-curated starter library hand-picked by the BOOK IT! team.

Related: 4 tips for selling more pizza during the Super Bowl

For last year’s Super Bowl, Pizza Hut, celebrated the family that gave birth to the first baby born after kick-off.

This is Pizza Hut’s second year as the NFL’s official pizza sponsor. The chain took over the spot from Papa John’s, which was mired in controversy at the time over remarks made by founder John Schnatter.

In their 2020 promotion, Pizza Hut has recruited a famous pair of Super Bowl twins—Super Bowl LIII champs and identical twins Devin and Jason McCourty of the New England Patriots—as celebrity athlete spokesmen. “We know that parents don’t get an off-season, so as twins and parents ourselves, we’re pumped to help honor one lucky family welcoming twins on Super Bowl Sunday,” Jason McCourty said. “We have awesome family memories with Pizza Hut growing up. From the beginning, we’ve always been passionate about food, family and football, so it feels great to be part of a Super Bowl campaign that spotlights all three.”

The Super Bowl is set to take place on Sunday, February 2. To enter the contest, parents with twins born during the game simply need to post a photo on Twitter of their new arrivals (including exact times of birth), using the hashtags #PHTwin2Win and #promotion, and tag @PizzaHut to be included for consideration. To review the rules for the contest, click here.