Stickin’ with chicken on your menu? Here’s how to sell more of it. - PMQ Pizza Magazine 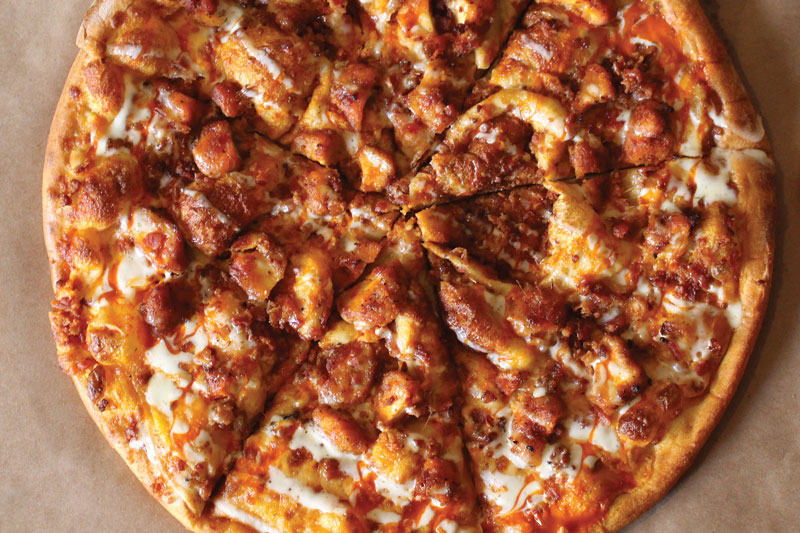 Pepperoni may rule the roost when it comes to pizza toppings, but chicken has been quietly strutting and clucking its way to the top of the menu over the last several years. How many chicken-topped pizzas do you offer on your menu? When was the last time you introduced one beyond the standard barbecue chicken option? We spoke with single-unit, multi-unit and fast-casual operators around the country to find out what consumers want on their chicken pizzas and to get the final word on the world’s tastiest bird.

The versatility of chicken makes it “an easy protein to pair with a variety of flavors,” Matousek notes. It’s also considered a healthy option, compared to some grease-laden meats.

PMQ: How popular are your chicken-topped pizzas?

Matousek: The Barbecue Chicken Pizza is our No. 1 chicken pizza by far. It’s summertime all year with chicken, barbecue sauce and red onions, smothered with cheddar and mozzarella cheeses, and sprinkled with fresh cilantro. The chicken option speaks to people looking for a lighter option, and our chicken pizzas make up roughly 12.22% of the gourmet pizzas we sell.

PMQ: What other chicken combinations have been successful for you?

Matousek: We currently feature our most successful gourmet pizza creations: the Barbecue Chicken Pizza, the Flying Buffalo Pizza and the Chicken Teriyaki Pizza. We’ve featured a Tropical Chicken Pizza as well. As far as flatbreads go, we have a Chicken Peppadew Flatbread and a Spicy Pesto Chicken Flatbread.

Chicken is the second most popular meat topping at 1000 Degrees, right behind pepperoni, according to Petruzzi. At times, it even takes top honors when it’s featured on a limited-time signature pie.

PMQ: Do customers choose chicken as a build-your-own option very often, or do they usually just get it on signature pies?

Petruzzi: Chicken is a fairly new ingredient for pizza customers. When we do see a build-your-own-pizza with chicken on it, it typically starts as a signature pie and additional toppings are added.

PMQ: What has been your most popular chicken- topped pizza of all time?

Petruzzi: Buffalo Chicken has been our most popular chicken-topped pizza, but only by a small margin. Our version is a very familiar pizza, with a bit of a twist. Most buffalo sauces are simple, but the Frank’s Red Hot and butter sauce we use led to a very greasy pizza. We reformulated the traditional sauce just a bit to suit our oven and crust style.

PMQ: What other chicken combinations have you tried that were successful?

Petruzzi: Our Tuscan Chicken was a big hit. On that pie, we used sun-dried tomatoes, Asiago cheese and spinach. The tomatoes on the pie were a bit sweeter than we expected, so we developed a recipe that required marinating them in a balsamic vinaigrette to cut the sweetness and deepen the earthy base notes present in the pie. Meanwhile, our Smokey Pollo continues to be one of our top four classic pizzas sold consistently across the country. It’s a barbecue-based pizza with a light sprinkling of blue cheese that helps to harmonize the flavor.

Gemignani teamed up with San Francisco Giants second baseman Joe Panik to create a chicken pizza called the Panik Parm Pie. Topped with fried chicken cutlets, mozzarella and grated Parmesan, it was featured in a fundraising project that ran during baseball season. For each slice sold, a dollar was donated to George Mark Children’s House, a Bay Area charity.

PMQ: Why was chicken chosen for this pizza over a different meat topping?

Gemignani: Joe Panik is from New York, and this is a pizza that’s traditional on the East Coast. It’s a pie he hadn’t seen since he has been playing for the Giants in San Francisco.

PMQ: What other chicken combinations have you tried that were successful?

Gemignani: So many—the options are endless. We made a chicken and pesto with sun-dried tomato, artichoke and goat cheese; a barbecue chicken with ranch, bacon and tomato; a Thai chicken and coconut; and a chicken Caesar salad pizza. Then there are the chicken marsala, the jerk chicken, and the chicken enchilada with salsa verde.

PMQ: What has been your most popular chicken- topped pizza?

Gemignani: It’s The Dillinger, a pizza created by chef Matt Molina at my restaurant, Capo’s, in the North Beach neighborhood of San Francisco. It’s a cast-iron pizza with a smoked vodka cream sauce, four cheeses, bacon, artichokes broccolini, fresh lemon and onions. It’s amazing, and we always run out. 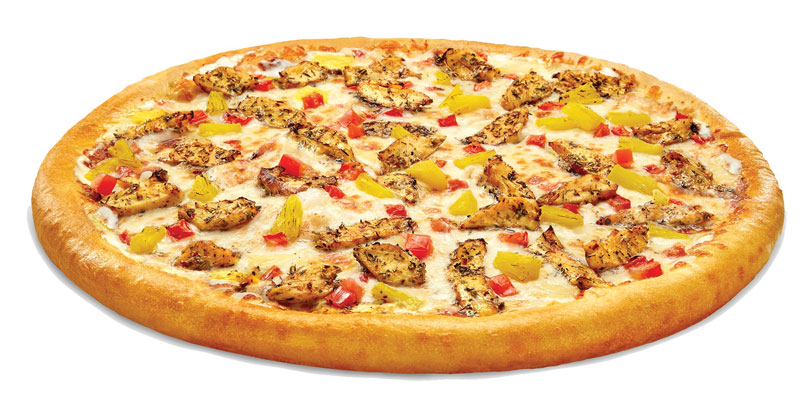 “For some customers, our Jamaican Jerk might be unexpected on a pizza menu and, when combined with sweet, juicy pineapple, you get the popular flavor combination of sweet heat.”
—Donette Beattie, Toppers Pizza

Chicken’s flying off the shelves at Toppers, Beattie says. “There will always be pizza purists who reach for sausage or pepperoni, but chicken is moving up in popularity as a protein topper for pizza,” she adds. “Younger palates are more adventurous; they’re flavor-seeking and willing to try new things. Chicken has a lean and clean reputation that lends itself to many flavor profiles, so the potential to create with it is endless.”

PMQ: What has been your most popular chicken- topped pizza of all time?

Beattie: The Buffalo Chicken Pizza has been our most popular chicken-topped pizza. But we’ve had a number of other innovative and popular chicken pies on the menu in the past, including:

PMQ: How do you select which ingredients to pair with chicken for your signature pies?

Beattie: There are tried-and-true flavor combinations that people love, like buffalo chicken, smoky barbecue chicken or chicken bacon ranch. From there, we watch flavor trends in all segments and retail to develop new flavors. For some customers, our Jamaican Jerk might be unexpected on a pizza menu and, when combined with sweet, juicy pineapple, you get the popular flavor combination of sweet heat. Looking forward, we’re working on new creations with chicken and including all flavor profiles, such as sweet, spicy, cheesy and savory.

French pioneered the fast-casual pizza movement when he opened the first Your Pie in 2008 and says chicken-topped pies rank as the most popular items on the company’s menu. “Chicken is a great protein option for pizzas when you’re not looking for the meat to overpower the flavor profile,” he says. “Therefore, we usually offer chicken to complement bolder flavors, such as our basil pesto and buffalo sauces.”

PMQ: What has been your most successful or popular chicken-topped pizza?

French: That would be The Nat, inspired by my wife, Natalie. It’s our second most popular pizza of all time, with basil pesto, mozzarella, feta, sun-dried tomatoes, spinach and chicken.

French: Absolutely. When people are looking to add a healthy protein to complement the other flavors that they’ve created, chicken is a great choice.

Liz Barrett is PMQ’s editor-at-large and author of Pizza: A Slice of American History.