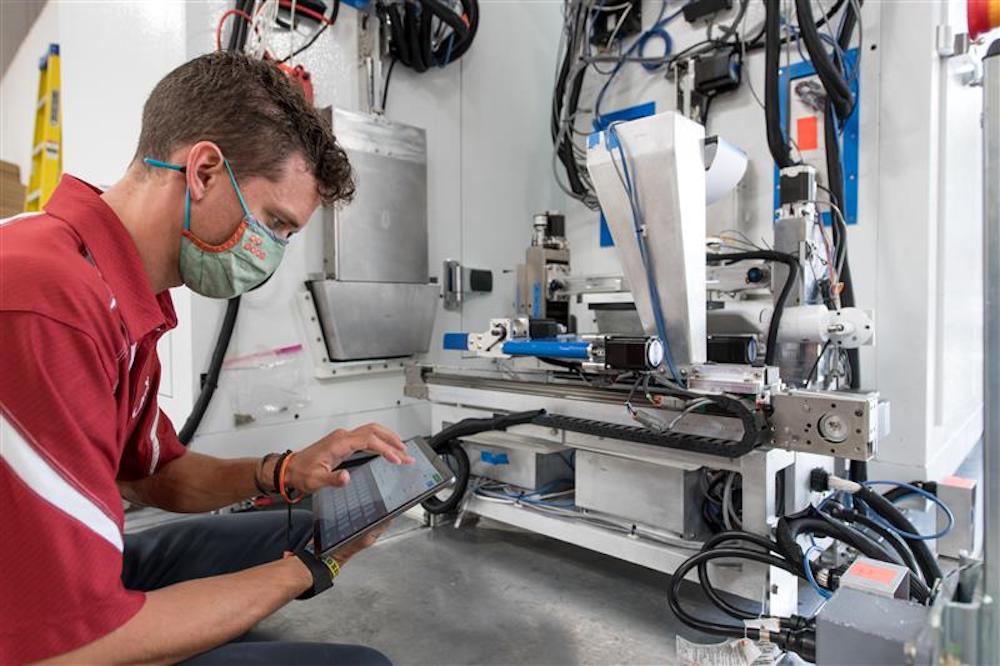 Houston, we have a pizza from Stellar Pizza.

Related: Pizza-making robots do it all in this Paris pizzeria

It’s not exactly another giant leap for mankind, but a team of former rocket-science engineers from Elon Musk’s SpaceX plan to launch a robot-powered mobile pizzeria on the streets of Los Angeles next spring.

Benson Tsai, a former SpaceX engineer, is CEO of Stellar Pizza. He leads a mod squad of fellow ex-SpaceX brainiacs that includes Brian Langone and James Wahawisan. Even the chef, Ted Cizma, is a former Elon Musk employee; Cizma served as executive chef and director of culinary services at SpaceX. He collaborated with pizza consultant Noel Brohner to develop recipes for Stellar Pizza’s robot-made pies.

Stellar Pizza used cutting-edge technology and advanced robotics to create an automated, touchless machine that bakes pizza from scratch, including fresh toppings, in under five minutes, according to a press release from the company. With the machine itself housed in a food truck, Stellar Pizza can produce a pie every 45 seconds, the company says. 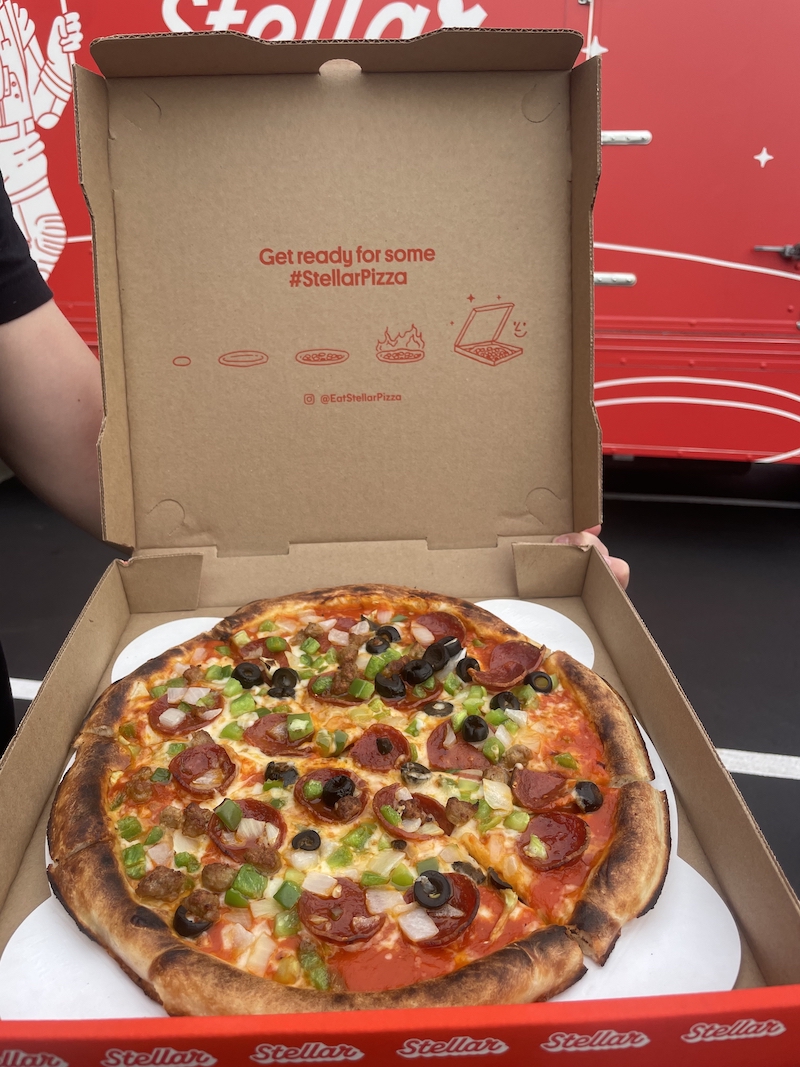 The robotic pizza-making process starts with a freshly prepared ball of raw pizza dough, which gets pressed and shaped into a round pizza crust. Housemade sauce and fresh toppings are added, and the pizza is inserted into one of four high-temperature custom-designed ovens for baking.

Tsai spent six years in the electric truck and bus industry—first as a cofounder of Motiv Power Systems and then as an early employee at Lucid Motors—before working for five years at SpaceX. There, he designed advanced battery systems for spaceships, rockets and satellites. In 2019, he founded Stellar Pizza in his hometown of Los Angeles, collaborating with engineers in South Bay’s scientific community to build the advanced robotic pizza-making system.

Following Stellar Pizza’s blast-off in Spring 2022, Tsai aims to bring the concept to communities around the country. 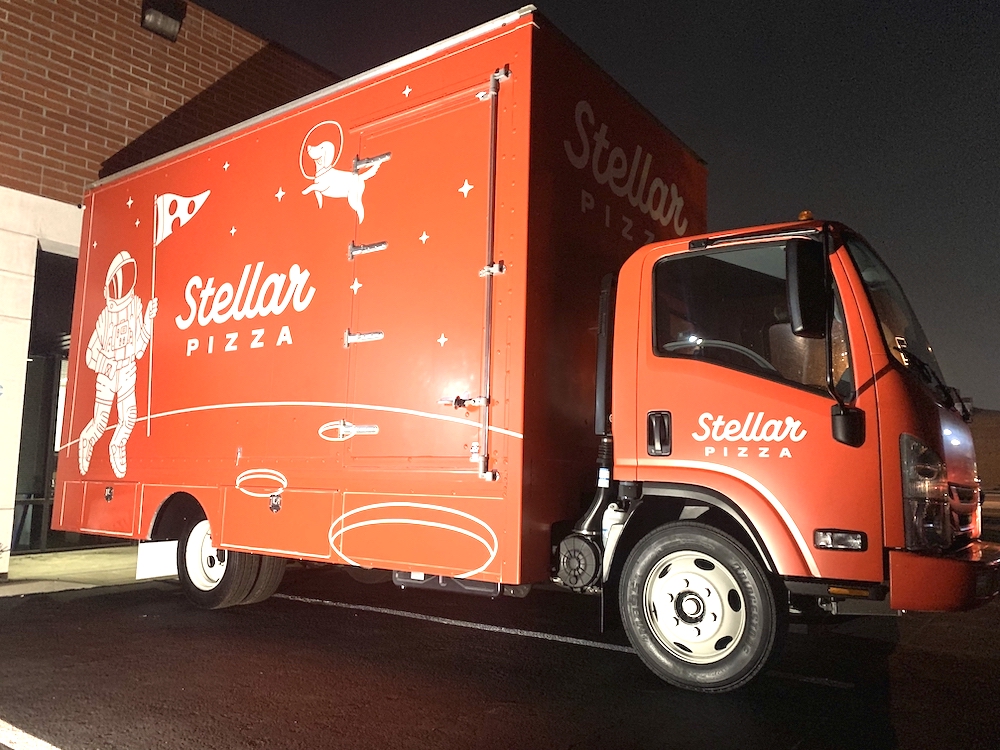 Entirely assembled by robotic machinery, the core ingredients for Stellar Pizza’s pies will include homemade dough, tomato sauce and Grande East Coast Mozzarella. The menu will feature a pepperoni pizza, a Supreme and a build-your-own option with toppings like onions, bacon, chicken, green peppers, olives and more.

Stellar Pizza won’t be the first mobile pizzeria company to use robotics to make its pies; as PMQ has previously reported, Zume Pizza started the movement back in 2017. However, Zume’s robots worked alongside humans to prep and par-bake the pizzas in a brick-and-mortar kitchen facility. Zume’s pizzas were then loaded onto delivery trucks equipped with ovens that finished the bake on the way to customers’ homes and offices. The Zume model didn’t fly, however; the founders moved away from pizza-making in late 2019 and laid off most of their staff in early 2020.

But Stellar Pizza differs from Zume because its robots actually prep and bake the pies in the food truck and can carry out tasks—such as pressing the dough—that Zume’s bots couldn’t handle. Not to mention Stellar’s engineers have some out-of-this-world credentials.