Frank Cipriano has turned his love of acting into a successful marketing tool for his business. He's proved that you can offer customers more than great food – you can offer them a great experience as well.

Some of Frank's acting successes include a Weight Watcher's commercial, a Yellow Pages commercial aired in the Vancouver area, a crazy security guard role in the movie "The Void" and around 30 plays. Frank's Italian father sent him to cooking school in Italy when he was a teenager. About 20 years ago, Frank decided that he and his wife needed a place to settle down, so they started looking for a space to open a small Italian del/co. 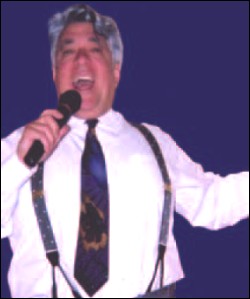 rank found a place that seated 60 people, and realized he could also do parties. He decided to buy the place. They opened up Cipriano's and were doing mostly delivery and takeout orders. One night they were packed with several people that knew Frank. A guy called out to him to do a stand-up routine. "I came out and sang 'That's Amore!' and performed for about 20 minutes," Frank says. "My friends and the people that were there went out and told everyone they knew about the act. The next night the place was packed with new people. It's been a tradition ever since."

Once the restaurant is full, which is usually about 8:30 or 9 p.m., the restaurant's doors are locked, and Frank comes out with his song and act. He says the act has gotten so successful he's had to stop doing delivery completely. "We're so busy inside that we don't have the space or staff to do the deliveries."

Frank says his material is clean, so he appeals to all audiences. "My goal is to make people forget about their mortgages and car payments with a laugh and a pizza." He does reservations because of the popularity of the act. He says that to get a table people have to call about a week in advance. Frank says many people come in not telling their guests about the comedy act. "They just tell them about this great Italian place they found."

The restaurant is located in the downtown section of Vancouver, and the clientele is across the board including actors, doctors and construction workers. Two couples aged 35 to 55 make up the average table at Cipriano's. He says there are usually a couple hundred people coming in every weekend. 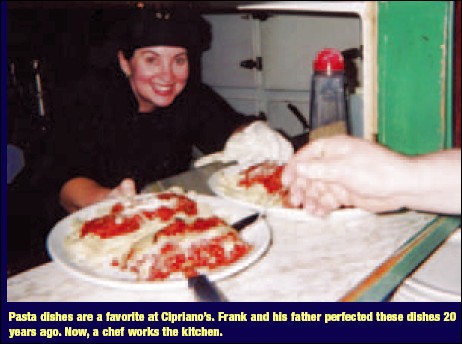 Frank offers pizzas by the topping along with three specialty pizzas including the Wise Guy (a supreme), the Veggie and Big Al's (all meat) in three sizes: 10, 12, and 14-inch. He also offers daily specials on pizzas. Another way he promotes his pizza is a menu special for two large pieces of garlic bread and two sodas or Italian sodas. Frank says many people that come in order a pizza for an appetizer for the table, and then order some of the specialty pasta dishes. Frank says his bestseller is the Mama Cipriano's Feast. With the feast customers get a choice of salads, bruschetta, garlic bread, any entree on the menu, a beverage and dessert all for $24.95. He sells over 100 of these a week.

Pick-up orders are handled through a side door of the restaurant after it is locked up for the comedy act. The most popular takeout order is pizza. Frank says people pick up over 100 pizzas a week, but most of the business comes from dine-in – around 80 percent. Frank has five employees working during a shift: a manager, a chef and two waiters. Bar sales make up about 20 percent of his sales, with wine and beer being the biggest sellers.

Cipriano's is only open at night for two reasons: Frank is still acting and uses his days to audition and act in the roles he lands, and the restaurant is a little more upscale. Frank says it works best for him to have dinner only. I asked him if his acting ever gets him recognized. "When I did the Yellow Pages commercial, the restaurant would get busy because they would see me on TV." Frank says he likes the balance of acting and business. "It's fun to act, and then come back down to reality."

Frank's restaurant is open only five days out of the week, and most things are made from scratch each day in the restaurant. They make all their own pastas and sauces, and he says it's managed well on a daily basis. Since they close the restaurant down on Sunday and Monday, they essentially sell out each week and start with fresh products on Tuesday. Because they order just enough for the week, spoilage is not an issue.

Frank says he has never advertised his restaurant, and says he never will. With the comedy act, people are telling five to seven new people each week about the place, he says. The place is as busy as he can handle. Frank is considering opening up a satellite store to handle pickups and maybe restarting delivery.

Frank Cipriano is an actor by day and pizzeria owner by night. He says he has struggled deciding whether he loves food or acting more, so he does both. During the day he auditions for small acting roles including commercials and films. At night, he runs his Italian restaurant, which he says gives him a balance between acting and reality.