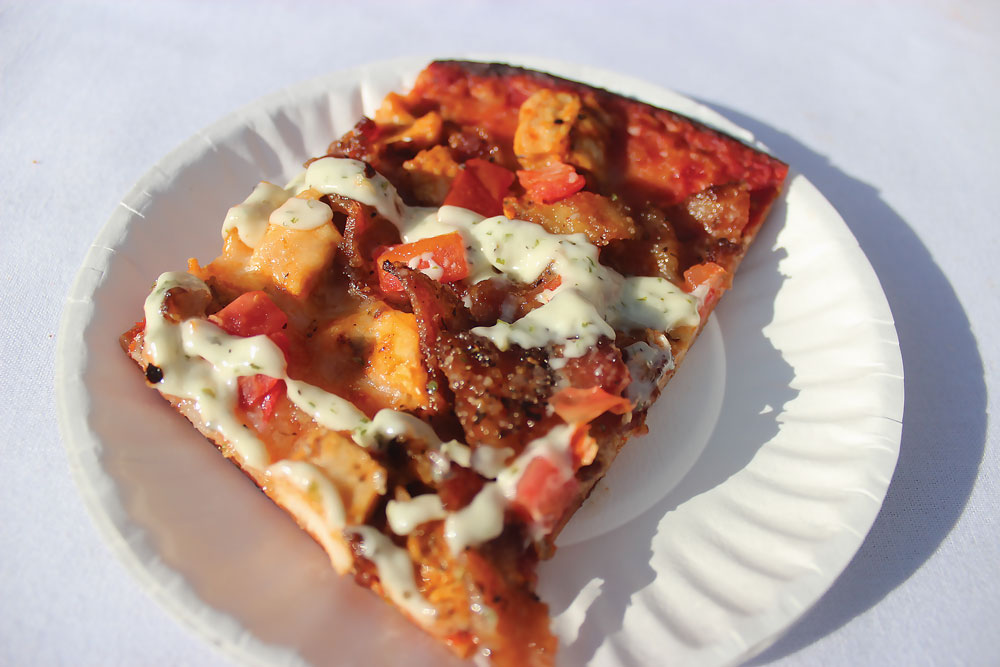 America’s Gateway to the West boasts many unique features—the world’s tallest arch (located smack dab in the middle of downtown), one of the oldest botanical gardens in the United States, and, of course, the one-of-a-kind St. Louis-style pizza.

In the 1950s, pizzerias started popping up in an area of St. Louis—where Italian immigrants were settling—called The Hill.

As luck would have it, in 1947, a stretchless cheese called Provel was created “specifically for the pizza industry.” Provel combined provolone, Swiss, cheddar and liquid smoke. This unusual blend of cheeses may have been designed to taste smoky in an effort to mimic the flavor of pizza coming out of a wood-burning oven. Whether it was a matter of taste or clever cheese marketing, St. Louis’ pizzerias began using Provel.

Beyond the Provel, St. Louis’ round, cracker-thin pies, which are cut into squares (called party or tavern cut), are adorned with a slightly sweet sauce and toppings all the way to the edge so that every bite is covered.

Who was the first to serve this unique style? While Imo’s Pizza—which touts its pizza as “the Square Beyond Compare”—is widely credited for the famous St. Louis style, another historic pizzeria, Farotto’s, also lays claim to the creation, having opened its doors in 1956, eight years prior to Imo’s.

As with other regions of the country, St. Louis-style pizza is, of course, not the only style of pizza offered in the city. In fact, many pizzerias provide customers with a choice of cheese—because the word Provel on a menu can cause even some locals to run the other way.

Bashing St. Louis-style pizza turned into a running joke on Jimmy Kimmel Live! after the host’s wife, St. Louis native Molly McNearney, made him try a slice. Deadspin columnist Drew Magary even denounced the St. Louis style as a “war crime.” But this style has its fans. Actor Jon Hamm, appearing on Kimmel’s show, proclaimed that it “tastes like 11 World Series victories.” And J. Kenji Lopez-Alt of Eater.com writes, “Ever since tasting it for the first time, I haven’t been able to stop thinking about it. And I’ve finally figured out why I love it so much. St. Louis-style pizza is not pizza. It’s a big pizza-flavored nacho.”

Despite this well-documented love/hate relationship with Provel, the St. Louis style has broken free of St. Louis, with Imo’s Pizza opening nearly 100 locations inside and outside of the city, and several other pizzerias offering it on menus in New York

Today’s consumers love experiencing new dishes and posting about them on social media, and it would be relatively easy to make and market a St. Louis-style pizza in your own pizzeria. You can order Provel cheese or create something similar in your kitchen using cheddar, Swiss and smoked provolone. The St. Louis-style dough is yeast-free, resulting in that familiar cracker-thin crust and eliminating the rise time during prep.

Once you’ve tested some recipes, offer the pie as a special to St. Louis transplants or those who are curious about regional pizza styles. On your slowest night of the week, consider running a special that introduces customers to a different city’s style, such as St. Louis, Chicago or Detroit. Doing some light research, you can present each pizza with a list of interesting pizza and city facts or a quiz that makes the experience more memorable.

Post a Facebook Live video showing your guests’ reactions to a taste of St. Louis-style pizza. You may find that a majority of your customers like it, giving you another pizza to add as a rotating special.

Liz Barrett Foster is PMQ’s editor at large, and author of Pizza: A Slice of American History.