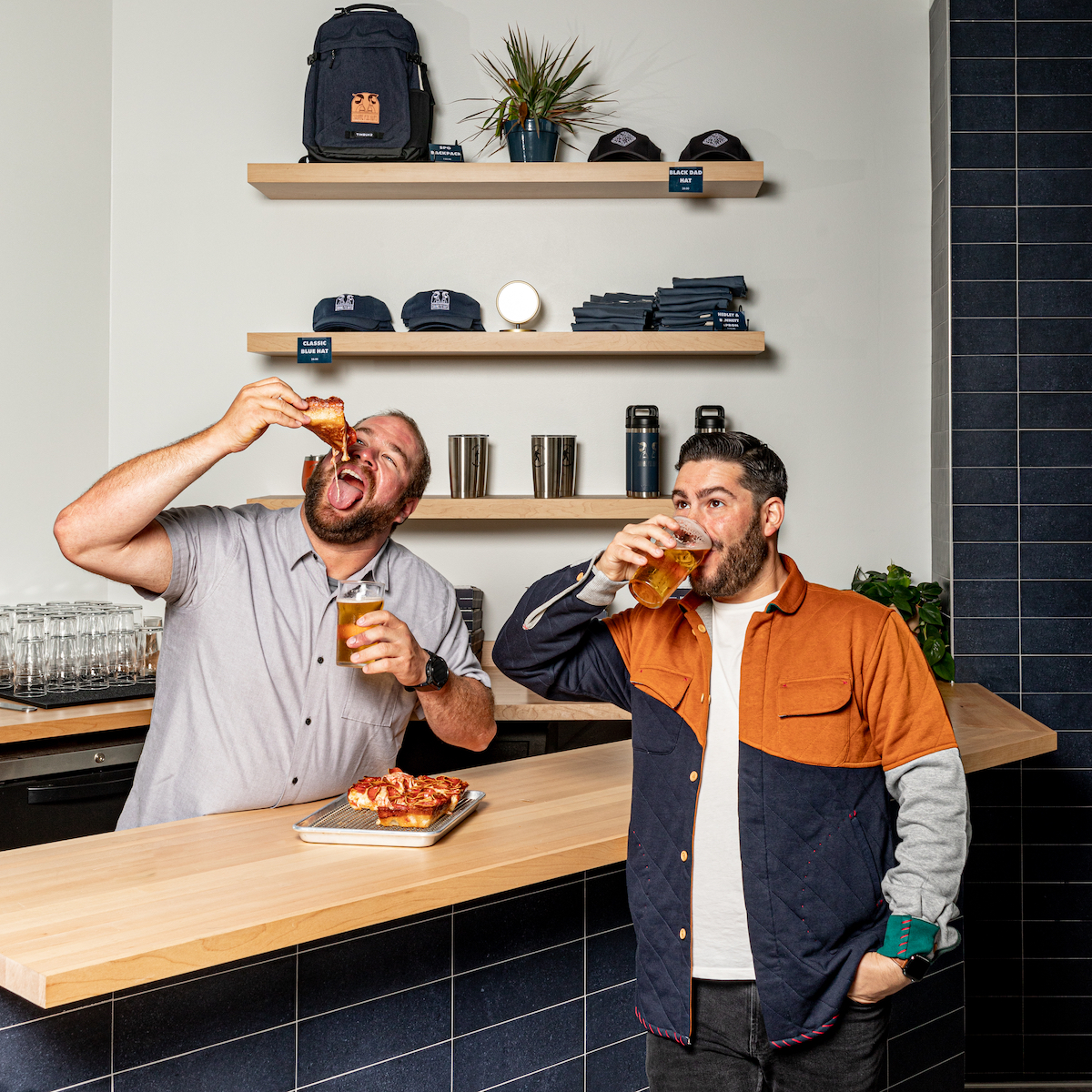 How did two Jewish guys—one from Long Island, the other from Seattle—become famous in San Francisco for making Detroit-style pizzas? Danny Stoller, co-founder of Square Pie Guys (SPG), is surely one of the few American pizzaioli who could have been a rabbi (his own rabbi suggested that career at Stoller’s bar mitzvah). His business partner, Marc Schechter, started out making pies and giving them away for free to his friends—and to homeless people. They are, to borrow a homey expression, “good people.” And their shared values—a firm conviction that with great pizza making skill comes great responsibility—inform and shape the culture at Square Pie Guys, with three locations in San Francisco and Oakland.

Brought together by God or happenstance—depending on your perspective—Stoller and Schechter have become media darlings and ambassadors for a pizza style that barely existed outside of Detroit when they were kids. Thanks in part to some masterful marketing, every location they open makes headlines in the local press. And every location makes a difference in the lives of people in need. Because the founders aren’t just partners in a pizzeria but collaborators with a network of community nonprofits that receive a portion of Square Pie Guys’ sales.

“Look, no one starts a business because they aren’t trying to build a better life for themselves,” Stoller explains. “And, as we were talking about the type of company we wanted to run, we knew community was such an important part of what we were striving for. We’ve been so lucky to have a voice, to get the interest from the press. Being able to repay a bit of that goodwill is just the natural evolution of trying to do things the right way.” 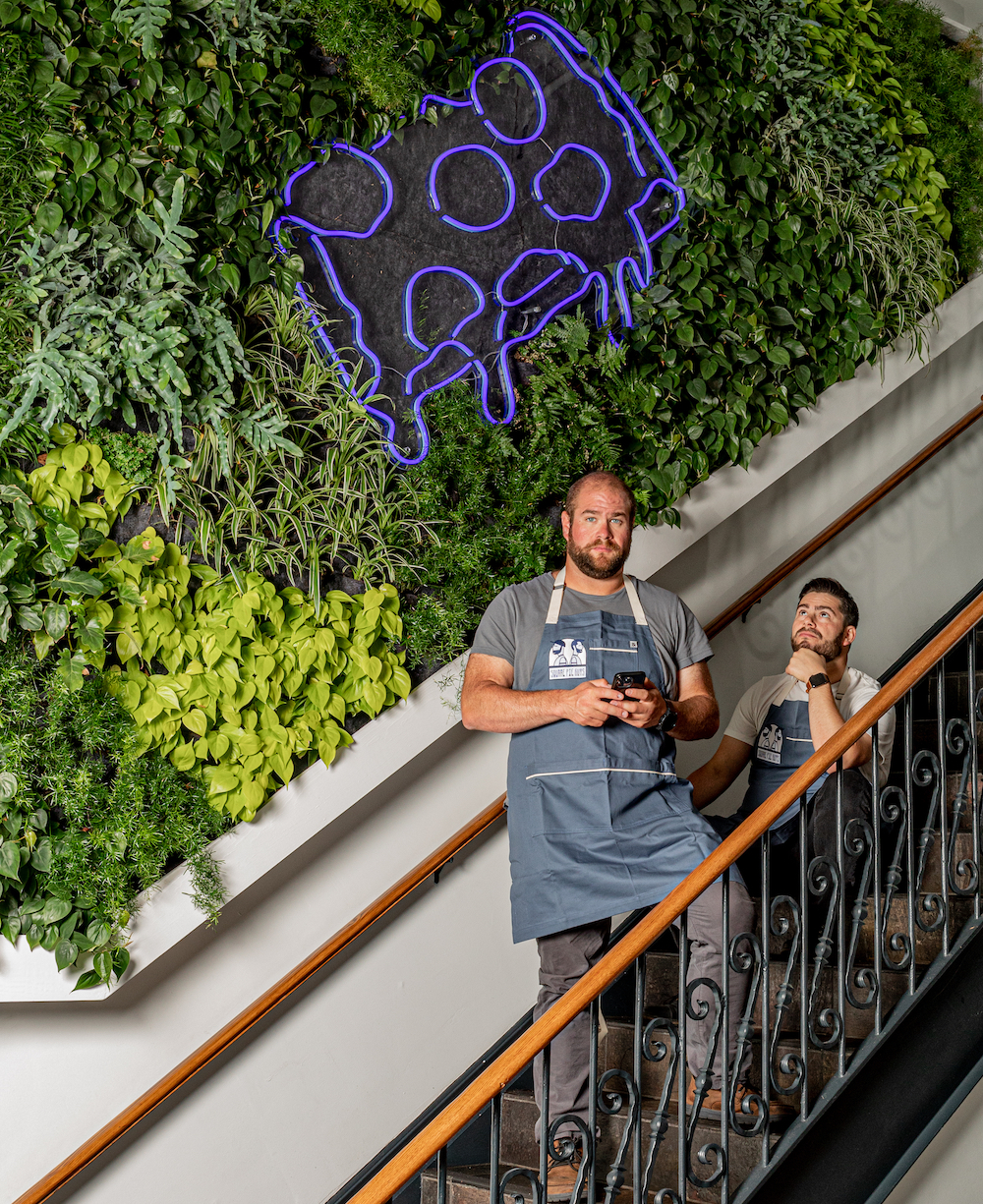 Crossing Pizza Paths
When he was growing up on Long Island, Schechter says, “It was a pretty normal thing to only eat great pizza. When I went to summer camp, I was shocked by the terrible frozen pizzas they’d serve us because I was so spoiled by what we had back home. Ever since then, I went out of my way to try and find the best pizza wherever I was.”

That quest continued when he moved to Berkeley, California. He was working in software sales, but what he loved was making pizzas for his friends at home—and showing them off on Instagram under the @squarepizzaguy (singular) handle. “At the same time, my fiancé broke up with me, which left this big hole in my life,” Schechter says. “I also wasn’t super-happy with my software sales career. But making pizza for people truly made me happy. I poured my heart and soul into it.”

Schechter often made more pizza than he needed, so he donated the extra slices to the Homeless Action Center next door. Still working his day job, he also took a weekend gig at Pizza Hacker in San Francisco. Before long, he started running their pop-up at Vinyl Wine Bar and further honing his skills.

Stoller, meanwhile, had worked at several fine-dining restaurants in Seattle after quitting college at 18. He eventually landed at The Culinary Edge agency in San Francisco. “We developed recipes and menus for some of the largest restaurant groups in the country,” he says. “One of my projects was overhauling and developing a whole new pizza concept, from dough recipes to operations materials to financial plans. So, in a twist of fate, I basically got paid to learn the craft, a craft that would quickly become my own.”

That’s how Stoller and Schechter’s paths finally crossed—Schechter was friends with Stoller’s new boss at The Culinary Edge and had been hired to cater a company event. By this point, in early 2018, Schechter had moved on to another weekend job, this one at the Burlingame location of Pizzeria Delfina, and was running his own pizza pop-up—featuring New York-style and neo-Neapolitan pies—at Vinyl Wine Bar.

The two men met and hit it off. “We started chatting about pizza, and we made some long bike rides to tour pizzerias in Oakland and Berkeley and became fast friends,” Schechter says. “At Danny’s July 4th barbecue in 2018, I pitched him the idea of a Detroit-style fast-casual restaurant. It immediately clicked in Danny’s head, and we decided to partner. We would convert my pop-up into the Square Pie Guys pop-up in September of 2018.” 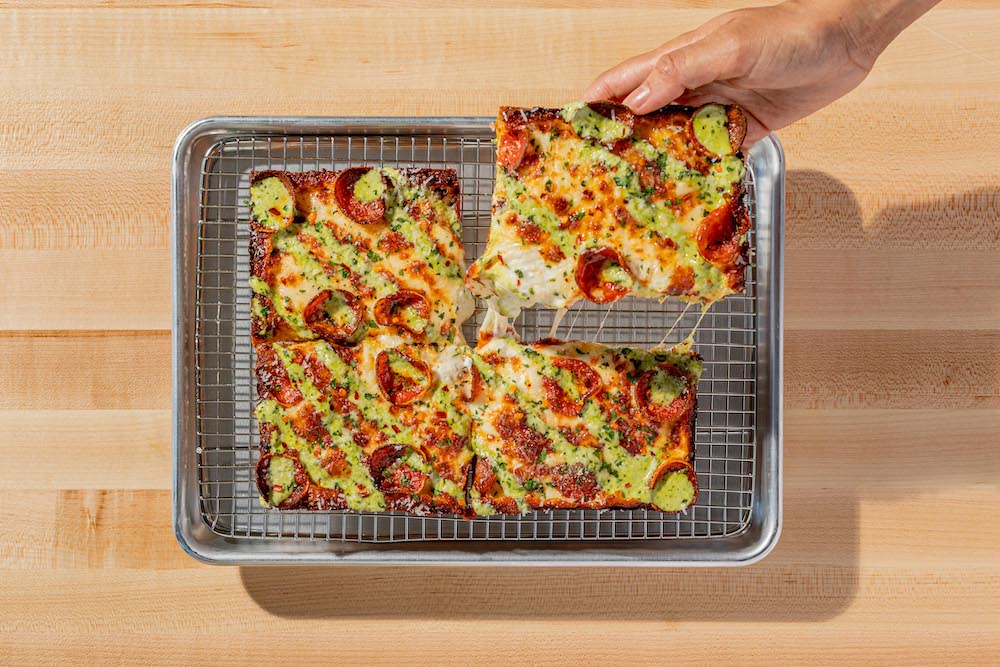 Building a Brand
Not long before that, Schechter had begun experimenting with Detroit-style pizza for his pop-ups. One night, a betrothed couple, looking for a wedding caterer, showed up at one of Schechter’s locally renowned pop-ups for a tasting. But Schechter had sold out for the night. All he had left were three Detroit-style pans with dough that had been proofing for his test pies.

“I told them that I could make them Detroit-style just so they could try my sauce and my toppings and get a sense for my pizza making style,” Schechter says. “They loved the pies and asked if I could serve those at their wedding. I told them it’d be very difficult since they had 50 guests and I only had three pans. I’d need to buy at least 20 to 30 pans, and it’d be very expensive. Without hesitation, they told me to include the cost of the pans in my catering quote. That’s the true origin story! The couple accepted my quote and bought my first 30 Detroit-style pans. Those pans are what Danny and I first launched the pop-up with.”

Soon, Schechter’s @squarepieguy account on Instagram, which had built up a substantial following, became @squarepieguys—with an S. The partners opened their first brick-and-mortar location in July 2019 in San Francisco’s SoMa neighborhood. Offering Detroit-style fare “allowed us to stand out amongst the sea of other pizza places and gain attention for a novel new pizza style in the Bay Area,” Schechter notes. Stoller adds, “We knew that, if we did it well, we’d benefit from folks’ interest in authentic regional food they either had never tried or had a deep nostalgia for. We also knew that, if we weren’t careful, we could end up a novelty, a flash in the pan, so there was a deep desire to make sure that not only was our pizza representative of the Detroit tradition, but that it met our high standards for excellence. Basically, we wanted the best elements of the tradition but didn’t want to become mired in it.”

To get media attention, the partners worked with PR firms at first, then nurtured the relationships they’d forged with the local press on their own. “One piece of feedback we get is that most operators aren’t responsive [to media inquiries],” Stoller points out. “So they don’t get their voices heard as much because they’re not answering their phone or their email. We do.”

With media exposure came opportunities to collaborate on fundraising events with celebrity chefs like Samin Nosrat, author of Salt Fat Acid Heat and host of the Netflix show of the same name. For National Pepperoni Pizza Day in 2021, they rounded up a dozen Bay Area pizzerias to form the Pepperoni Posse, with each shop donating a portion of the day’s sales to nonprofits combating food insecurity.

From a marketing standpoint, these relationships help establish SPG as a business that’s about more than its bottom line, which is increasingly appealing to millennial and Gen Z customers. And Stoller and Schechter makes sure to celebrate their own diverse roster of employees across the web.

It’s rare to find a restaurant company that spotlights every individual team member, from shift leads to dishwashers, on its website with professionally shot photographs. But SPG does exactly that. “At the end of the day, we’re only a small part of Square Pie Guys,” Stoller says. “With each store, that becomes more and more true. I was tired of going to restaurants’ websites and only seeing senior leadership. In a time when folks complain about labor and how people don’t want to work, they never take the time to look in the mirror. We’ve seen that folks like working somewhere they are valued, and the first of our four core values is ‘Team First.’ That means that, as we make decisions, we include the impact on the team when we do it. Featuring our amazing, hard-working team is just part of that overall approach to making SPG the best possible place to work.” 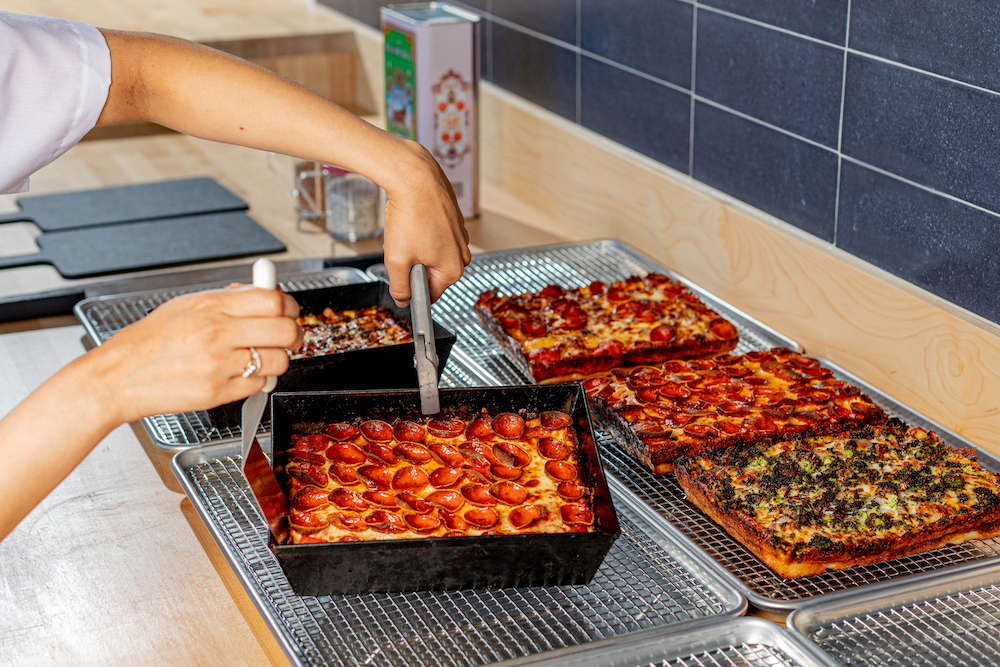 Making the Pizza
But what about the pizza? Local website SFGate says SPG serves “some of the best pizzas San Francisco has to offer.” Earlier this year, the San Francisco Chronicle listed SPG as one of the best pizzerias in the East Bay. Their pies “come out dense, salty and with a resonant crunch,” the article states, boasting “gooey cheese in the middle and crusty cheese on the perimeter. Order pepperoni and find it overflowing with cups.”

To nail those trademark crispy edges, SPG uses Tillamook cheddar, then tops the pie with Grande’s whole-milk, low-moisture mozzarella. “Honestly, getting to know your dough and making sure you’re using just enough oil in the pan are two huge parts of it,” Stoller says. “Beyond that, I think Detroit-style is way more forgiving—you can always start the oven on a super-high heat to get the pan hot and crisp those edges, then bring it down later. We’ve also found that choosing a cheese can be a really important part of the cheese edge; some of the low-moisture, whole-milk mozzarellas burn really easily.”

Pans make a difference, too. SPG uses anodized aluminum pans from Lloyd Industries. “In the early days, we realized that [these pans] were a lot more forgiving and gave us a better product,” Stoller says. “In fact, we’re still using pans at the first location that we used right when we opened!”

SPG has grown fast—three stores in three years—and they’re just getting warmed up. “I think there are still growth opportunities in the Bay Area, up in Marin County and down in the South Bay by the big tech companies,” Schechter says. “Then I’d like to see us grow to Southern California and some of the major metropolitan areas up the coast—Portland, Seattle, etc.”

“Square Pie Guys is the next great American pizza chain,” Stoller adds. “We both have a goal and vision to take this concept nationwide, likely without franchising. We think we’re just scratching the surface of interest in affordable, premium-quality pies that are unique and craveable but not a novelty. We think we bridge generational divides, and we’re constantly learning how to offer excellent service in-store and off-premise.”

Eventually, they want to see SPG locations in multiple states, with a brand name that’s recognized nationwide. And that rising tide could lift employees’ boats as well, Stoller believes. “I’ve heard stories of execs at Panda Express—also all corporate stores—bragging about former dishwashers becoming millionaires over the years. That, to me, is the most motivating and special thing I’ve ever heard. I want SPG to be the job that changes people’s lives.”