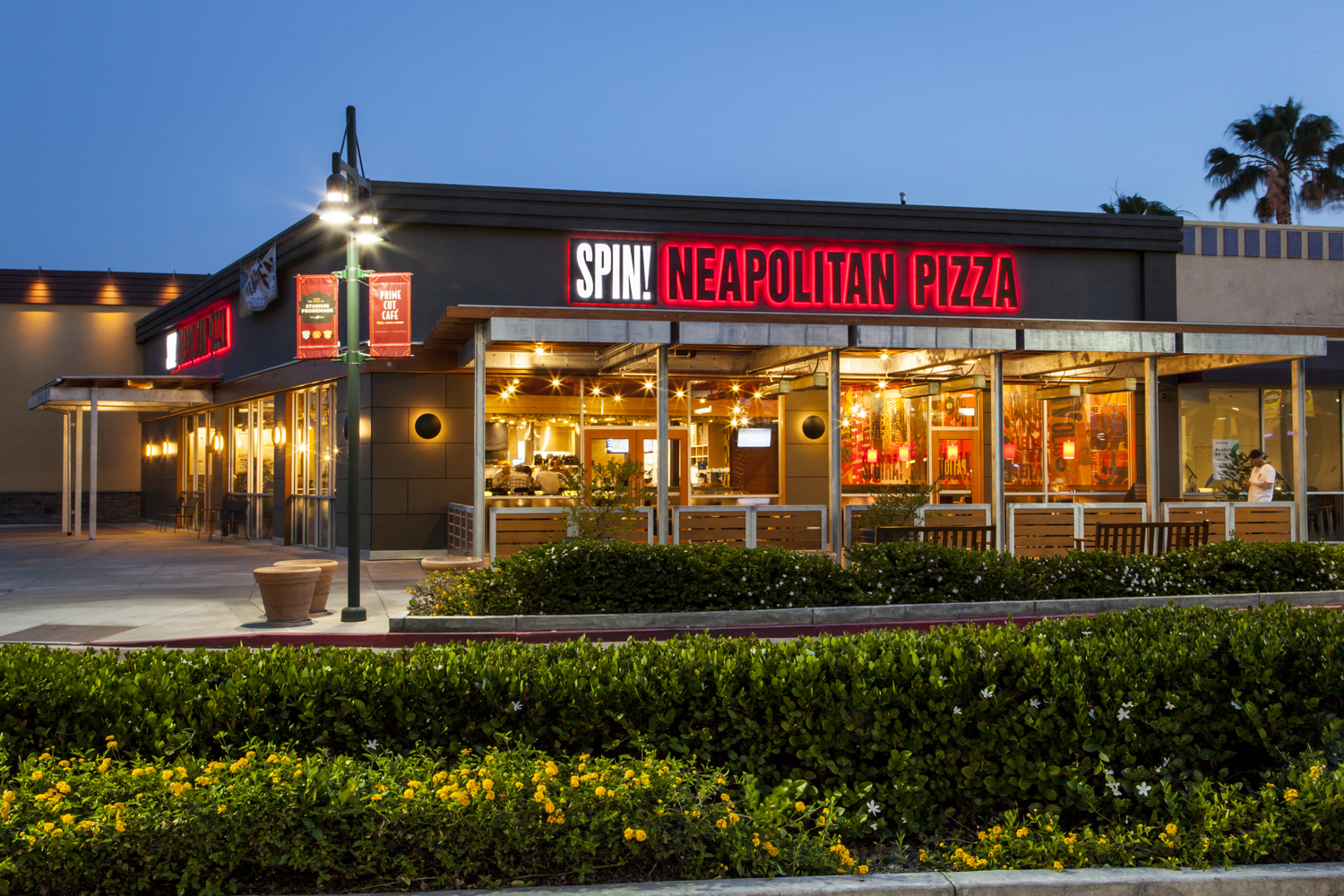 (Press release), Kansas City, MO, June 6, 2013 – SPIN! Neapolitan Pizza’s first franchise location is now open in Southern California in the City of Orange near Honda Center and Angels Stadium of Anaheim in Orange County. The restaurant is operated by Hofman Hospitality Group (HHG), which has completed a franchise agreement to open 37 SPIN!® restaurants throughout Southern California. SPIN!’s award-winning, premium fast-casual concept is known for its exceptional artisan food made from fresh ingredients without the gourmet price, its eclectic, affordable premium wines, and its inviting and warm culture and environment.

Named a “Breakout Brand” in 2013 by restaurant industry authority Nation’s Restaurant News and honored as one of the “Rest of the 101 Best Restaurants” in the nation by top foodie website TheDailyMeal.com, SPIN! serves authentic Neapolitan pizza coupled with the types of salads, sandwiches and sides that appeal to a more healthful and eclectic American palate. One of its more popular pizzas, the Margherita, was crowned one of the best dishes of 2012 by a national trade publication, its architecture won Best of Show, and it has been awarded best pizza honors by numerous publications in its hometown of Kansas City.

SPIN! was founded in 2005 by restaurant industry veterans Gail and Richard Lozoff and Edwin Brownell, who are experienced in large multi-unit expansion, franchising, and operations. The Lozoffs had visited pizzerias across Italy and wanted to create a warm and fun modern dining experience built around the earthy flavors of Italy with a fresh and healthy emphasis. They partnered with James Beard Award-winning chef Michael Smith to create a broadly appealing menu that features authentic Neapolitan pizza with a modern culinary twist. The award-winning concept has five locations in Greater Kansas City with a sixth under construction.

“At SPIN!, our goal is to serve a perfetta (perfect) pizza to every guest and to make each guest feel totally cared for,” said Gail Lozoff. “In Italy, pizza is an important part of the fabric of life, shared almost every day with friends and family. We wanted to bring that casual, delicious experience to the U.S. and are thrilled to have found a like-minded franchise partner like Craig Hofman.”

SPIN! also is recognized for its pioneering hybrid service model, which combines traditional
fast-casual ordering in the restaurant’s lobby with a robust full-service experience at the table. The “premium fast-casual” system is more appealing to diners, such as families and employees on lunch break, who want to control the speed of their meal without sacrificing service.

Craig Hofman, president of HHG, says SPIN! Neapolitan Pizza’s unique service model, authentic Neapolitan pizza, and menu offer a new kind of dining experience in Southern California. “Before I partnered with the founders of SPIN!, I was on a quest to create my own Neapolitan pizza brand.  When I first visited SPIN! in Kansas City, the menu and the attention to quality and innovation immediately impressed me. I am convinced that SPIN! will appeal tremendously to pizza and fresh artisan food lovers here in Orange County,” said Hofman.

Lauded by Food Critics and Guests

SPIN! offers a diverse selection of hand-spun, stone-fired, traditional thin-and-bubbly crust, rustic whole wheat crust, and gluten-free pizzas. SPIN!’s pizza dough is made fresh every day using several types of flour including one imported directly from Italy, and its gluten free crust is renowned for its flavor. SPIN! takes the unique step of roasting all toppings and ingredients in its stone hearth ovens each day, including mushrooms, caramelized onions, artichokes, and even capers, pecans, pineapples, pine nuts, and pancetta. SPIN! offers both traditional Pizza Rossa (red pizzas with crushed Roma tomato sauce) and Pizza Bianca (white pizzas with roasted garlic olive oil glaze), and a variety of hand-grated cheeses.

###
About SPIN! Neapolitan Pizza
Award-winning SPIN! Neapolitan Pizza is known for its exceptional, artisan food made from fresh ingredients without the gourmet price and its eclectic, affordable premium wines. Named a 2013 Breakout Brand by industry authority Nation’s Restaurant News, SPIN! was named one of the “Rest of the 101 Best Restaurants” in the nation by top foodie website TheDailyMeal.com. Its Margherita Pizza was crowned one of the nation’s best dishes of the year by Restaurant Business magazine, its architecture won Best of Show at the Mid America Design Awards, and it was named a “Top 100 Movers and Shakers” by Pizza Marketplace. Ranked number one by Zagat among Kansas City pizza restaurants, it has been named best pizza by every major Greater Kansas City publication. SPIN!’s menu is created in collaboration with James Beard Award-winning chef Michael Smith. Founded in 2005, SPIN! has five locations with a sixth under construction in the Greater Kansas City area and its first franchise location in Orange, Calif. This is the second national concept created by SPIN! co-owners Gail and Richard Lozoff and Edwin Brownell, who are experienced in large multi-unit expansion, franchising, and operations. www.spinpizza.com.