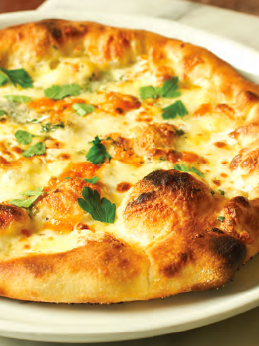 Soy cheese is making its way onto pizza menus, with varying success. While many pizzerias have adapted smoothly to healthy eating trends, from offering low-carb toppings to trans fat-free oils, soy cheese is more slowly making the transition into mainstream pizza fare. One reason may lie in the fact that soy is perceived as not melting as well as dairy cheese. (Lately there have been reports of a possible breakthrough in meltable soy cheese). Some true dairy lovers also maintain that the taste is inferior.

But, for the health-conscious, lactose intolerant or vegan customer, soy cheese would seem to be an ideal choice. It contains no dairy or cholesterol, and very low amounts of saturated fat. According to research by The Soyfoods Council, certain properties found in soy help reduce the potential for heart disease and certain cancers, particularly breast cancer. Soy foods are also known to improve bone health. In a recent study conducted by the United Soybean Board, one in five consumers reported that they would order soy foods in restaurants if they were available. And 78% percent of the consumers polled perceived soy products as healthy, up 4% from last year.

So where does soy cheese stand in the pizza world? Is it an up-and-coming trend or a quirky topping destined to remain marginal? We checked in with two operators and found two very different answers.

Pizzeria Paradiso opened in 1991 and immediately became a local favorite, routinely winning “best pizza” accolades in area magazines. With a solid track record and legions of loyal customers, the restaurant decided to try soy mozzarella when a group of regular customers would accept no substitute.

“They did more than request it,” recalls chef/owner Ruth Gresser. “They ordered pizza with no cheese, and when it came out, they pulled out a bag of their own soy cheese they had brought with them and added it to the pizza. After we had some other requests for it, including from staffers, we started doing some research.”

The research resulted in Pizzeria Paradiso adding not only soy cheese to its menu, but a whole-wheat crust as well. “When we first started offering this special item, it wasn’t part of our regular menu,” Gresser says. “We wanted to test the reaction before we invested in printing new menus. We wanted to make sure there was interest for the long term. We still sell more pepperoni than we do soy, but we believe it’s worth it to have soy on our menu for those customers who may not eat here at all if it wasn’t on the menu.”

As with any premium item, the soy cheese is available for an extra charge of $1.25. Gresser reports the extra cost has not deterred soy fans from ordering pizza with soy mozzarella, estimating that she sells 10 pizzas with soy cheese every day. Gresser says her pizza customers have taken to soy cheese, and it has been a good fit for her business. “From the dough to the ice cream, everything is made here, and we use all fresh ingredients. We already started out from a healthy, high-quality standpoint, so getting into the soy arena didn’t seem that big of a stretch.”

Gresser says soy cheese now occupies a permanent spot on her menu; she believes soy cheese, at least for her business, is here to stay.

They like their cheese cheesy out here in the heartland. Zpizza, a Newport Beach, California-based national franchise company (with some 70 units and counting) recently opened a store in Rochester, Minnesota, with soy cheese on the menu. But the soy cheese is a rarely ordered item, according to the Rochester staff. “There’s just not a lot of demand for it,” says kitchen manager Jeff Dylla. “I’d say we sell less than one pizza with soy cheese per week.”

That’s not to say that Minnesotans aren’t health conscious. Dylla reports that other healthy toppings, such as pesto, sun-dried tomatoes, kalamata olives and homemade roasted garlic sauce, sell well. Dylla says the soy cheese presents no special supply or storage problems, and its price isn’t so much higher that he charges more for it. With those potentially thorny issues out of the way, it would seem the path is cleared for soy to sell. “We keep it on the menu because we’re a franchise, and our home office is in charge of the menu,” Dylla says. “I’m sure it sells well in other parts of the country; it just hasn’t caught the fancy of our customers here. Maybe that will change. The soy is a newer item, and it takes time for people to change. We’ll continue to offer it until we’re told otherwise, but I’d hate to imagine we had to make a living off our soy cheese sales.”