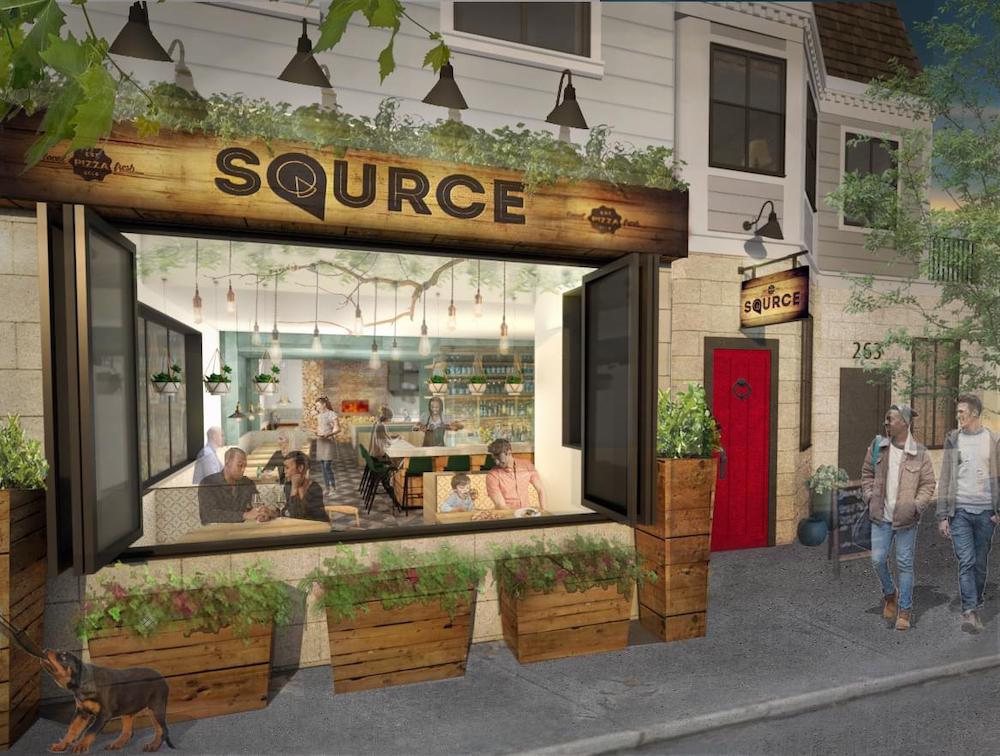 This rendering shows the exterior of the soon-to-open Source pizzeria in Cambridge, Massachusetts.

Sustainable growers in Massachusetts will soon have a new client when Source, a farm-to-table pizza restaurant, opens for business in Cambridge’s Harvard Square on Saturday.

Source’s leadership team has an impressive pedigree, with restaurant industry veteran Daniel Roughan as principal owner and general manager and Brian Kevorkian as executive chef. It’s the first restaurant that Roughan has personally owned in his career, according to Boston.com.

The menu will feature pizzas, pastas, small plates, entrees and desserts, made primarily with ingredients sourced within 100 miles of the eatery. Among the locally grown ingredients will be Rhode Island mushrooms, blue cheese from Great Hill Farms, locally grown sweet corn, and baby kale from Wards Berry Farm.

Most of the wines will be made from sustainably grown and organic ingredients, and the beers will come from local breweries like Nightshift, Aeronaut and Idle Hands. The cocktail menu offers spirits from regional distilleries like Bully Boy, Crooked Oak and Short Path.

“It’s about quality in the ingredients,” Roughan told Boston.com. “I want people to take that first bite and be transported.”

Related: Are your “authentic” Italian pizza ingredients really made in Italy?

Roughan served as director of operations for the Varano Group and helped grow the company from three restaurants averaging $10 million in annual sales to six restaurants, four cafes and a quick-service pizzeria with annual sales of nearly $40 million, according to Source’s website. He was also project manager for the opening of Fratelli in the Encore Boston Harbor Casino—the largest hospitality opening in Massachusetts history.

Kevorkian is a 25-year veteran chef who has worked in restaurants The Little Nell in Aspen, Colorado; the 5-diamond Gary Danko in San Francisco; and the two Michelin-starred SHO in New York City.

With the pandemic in mind, Source also uses air purifiers from iWave.