Elvis. Miley Cyrus. The Beatles. These are just some of the musicians whose memorabilia you will encounter when dining at Rockstar Pizza (rockstarpizza.net) in Brownsburg, Indiana. Founder Ron Mathews has offered a variety of gourmet pies and subs, as well as a rock star-friendly environment for music lovers, since 2007.

Rockstar is housed in an early 20th century brick building with walls covered with rock-and-roll posters, ticket stubs, albums and autographed photos of contemporary artists from Pink to Smashing Pumpkins. Glossy concert tickets and photos adorn tables, bringing familiar faces to each dining experience. “My wife worked for Sony Records, and it gave us access to cater a lot of well-known musicians,” says Mathews. “We wanted to blend our lives together, and I’m a pizza man, so Rockstar Pizza was formed. We decided to use my wife’s memorabilia, gold records, vinyl and CDs to decorate because they’re great conversation pieces. We put backstage passes and photos with artists varnished on the tables and have created an atmosphere that really gets people talking.”

A “pizza man” since he graduated high school, Mathews started out working for independent operators, then followed his dream to start his own store. He remembers his college business professor telling him, “Whatever you do, it has to be something that you are passionate about,” and he did.

A Meal Fit for a Rock Star

Rockstar’s slogan is “where gourmet pizza and subs take center stage.” The pizzeria offers 23 gourmet toppings and 13 specialty pizzas with three types of crust: hand-tossed, thin-crust and deep-dish. The White Out pie, a Rockstar specialty, is made with a fresh butter and roasted garlic olive oil base and dusted with oregano. Another must-have is The Works, layered with crumbled sausage, red onion, green peppers, black olives, fresh mushrooms and pepperoni. Mexican food lovers often order the Tex Mex: a salsa base with seasoned beef, red onion, lettuce, tomato, taco cheese and tortilla chips, served with sour cream. “The main thing that sets us apart from other places is our menu of gourmet pizzas,” Mathews says. “We have several toppings that our local competitors do not carry, such as spinach, feta, artichoke and sun-dried tomatoes. We make pizzas that you won’t find anywhere else.”

Some of the most popular of the 16 oven-baked gourmet sandwiches offered are the BBQ Chicken, Veggie Deluxe and Italian Beef; Mathews notes that some customers come in early to ensure they get their subs before they’re all gone. The Italian Beef offers thinly sliced beef marinated in the special Rockstar blend of au jus and served with hot or mild giardiniera. Stromboli Works is a concoction of crumbled sausage, fresh mushrooms, red onions, green peppers and black olives, all covered with pizza sauce and mozzarella.

Rockstar is constantly coming up with new creations and inviting customers to come in and try them for the small price of giving feedback. One example of Rockstar’s creativity is a Big Mac Pizza that was created last summer. This McDonald’s-inspired pizza is made with Thousand Island dressing, ground beef, pickles, cheddar cheese, bacon andtomatoes—everything your typical Big Mac would have. “The idea came from PMQ’s Think Tank, and it was an instant hit,” Mathews says. “New pizzas create excitement and loyalty.” 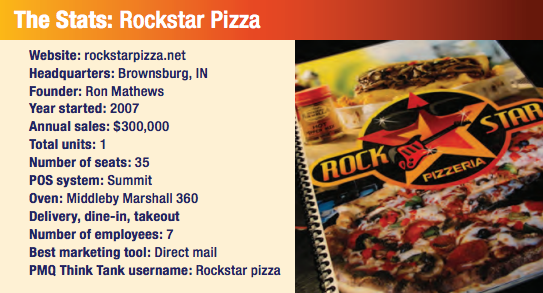 ​Rockstar Pizza’s creativity in the kitchen has not gone unnoticed; it has been named Best Pizza in Hendricks County since 2008, and was voted Hendricks’ best thin-crust pizza in 2009 and 2010. The pizzeria was also awarded Yahoo’s Best Pizzeria in Brownsburg. Indianapolis Monthly awarded Rockstar with “Best of the Burbs” in 2008, and its Caribbean Twist pizza won Best Pizza at the Indianapolis food show hosted by Gordon Food Service in 2010. “We have a really diverse menu with some exotic pizza choices,” Mathew explains. “For the adventurer, our Caribbean Twist is our best-seller, but for our less adventurous customers, it’s a coin flip between The Works and Meat Lovers Pizzas. A new pizza that is just starting to catch fire is our Thai pizza, featuring chicken curry and a red pepper glaze. It’s my favorite!”

To generate buzz in the community, Rockstar offers various discounts and coupons to customers, particularly through the VIP Club, which allows customers to sign up online and receive coupons, specials and promotions by email. Customers are automatically entered into a free gift certificate drawing when they apply, and they get to enjoy $3 off Rockstar’s pizza. Rockstar sends out emails to a list of 700 people each week. “We do the typical things like Valpak and menu mailers, but the main thing we focus on is supporting our community,” Mathews says. “For the annual Easter egg hunt, which is a huge deal around here, we provided 1,000 coupons and freebies for the eggs. We gave away some coupons and included a lot of free breadstick coupons or free 7” pizza coupons in the eggs, as well. People redeem them all year long!”

Rockstar also gives away 600 free 7” pizza vouchers to an elementary school reading program on a regular basis. “Every year, we sponsor five or six Little League teams,” Mathews says. “In our town, the chains don’t do anything for the community, and neither do any of the other independents, so it’s a great way for us give back and stand out at the same time.”

When it comes to marketing, Rockstar keeps up with the latest technology. The pizzeria has its own app that customers can download to their smartphones and mobile devices. Rockstar’s app allows users to stay up-to-date with the latest menu options, coupons and notifications. “We market aggressively online, as well as being visible in the community,” Mathews notes. “We have an amazing website that we have spent countless hours on, plus a Facebook page that we think will explode in 2011. I think that Facebook combined with smartphones are going to be the new ways to connect
instantly with our customers.”

Rockstar Pizza has evolved since the day Mathews opened the doors and he hopes growth continues this way. “We hope that 2011 will be a growing year for us,” he says. “We will be using tips from PMQ and trying out some new recipes. We will soon be looking for a larger place where we can have a salad bar, a place where we can serve beer and wine, and a party room.” Just like the rock stars that populate the walls of this pizzeria, Mathews understands the importance of an ever-growing fan base.