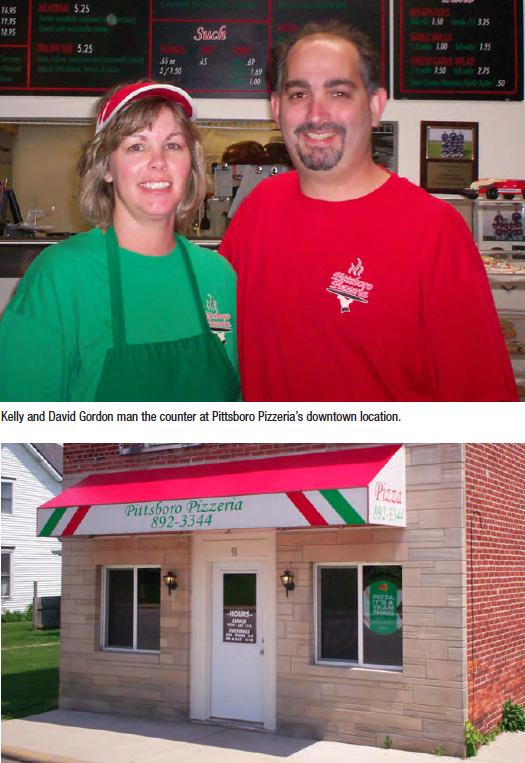 To many people, Pittsboro, Indiana, is just a tiny dot on a map. But to David and Kelly Gordon, the owners of Pittsboro Pizzeria (pittsboropizzeria.com), this town, with less than 3,000 residents, is home. So it’s no surprise that their take on marketing is focused on embracing community events—everything from Independence Day parades to free pizza for Cub Scout troops—that produce a breed of regular customers who help this mom-and-pop operation keep dishing up delicious pies, subs and salads. In a town as small as Pittsboro, seeing and being seen often makes a bigger impact than traditional advertising, so this husband-and-wife team try to go the extra mile, whether by implementing social media or sponsoring a Little League baseball team.

Although they have a small marketing budget and shun virtually all print advertising, in their three years of operation, the Gordons have found that a marketing approach that engages customers on an individual level is one that builds community. To get the skinny on the tactics behind Pittsboro Pizzeria’s success, we tracked down David to hear his philosophy on community-oriented marketing.

Why do you put an emphasis on community events for your marketing efforts?

We feel that community programs are the best way to connect with our customers. We know just about everyone who comes in our door by name. You have to support the schools and the fish fries and all of the special events. That is our marketing. It’s kind of a waste for us to spend money in more traditional areas, like newspaper and radio, because we’re not going to get bang for our buck. When you go directly to the people who are going to be your customers, you have a more positive and lasting effect on them. The vast majority of our customers are regulars.

Specifically, what sort of community events do you sponsor?

We do several. At the annual Fourth of July celebration, we usually have what we call the Pittsboro Pizzeria Sweepstakes, where we build a big fl oat and go down Main Street in the parade. We give away tickets to everyone, because everyone is a winner that day. It’s a big deal for us, because we have everyone right at our doorstep. Last year was huge—it was the town’s 175th anniversary. We also work with churches and scout troops; we’ll sponsor programs and give away free pizzas, or host a pizza making event. We’re working with a group to raise donations for Haiti earthquake victims, and there are area groups that will hold events, such as a purse auction, to raise money for social work clinics; we’ll help them out the same way and send over some pizzas. 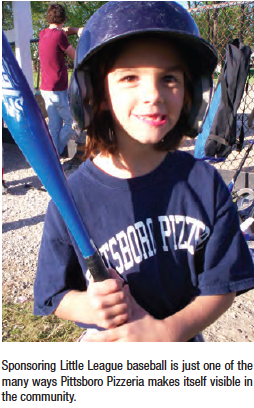 Are you involved with the local Little League?

That’s a big one for us. We really enjoy doing this. Last year, we sponsored two teams in different divisions in the league. This generates business for us; we get a banner at the park and our logo on the kids’ shirts. At the end of the year, we’ll do a pizza party at the store—and that’s on us; it’s just something we like to do for them. People even come in the door here and thank us for what we’re doing with baseball. It’s just a way to be involved.

How many community-oriented events would you say you do every year?

At least 25. About every other week, we’ll do something. Sometimes, events double up on us. Right now, we’re involved with Teacher Appreciation Week, where we give a 20% discount to all teachers just to say thanks for everything they’re doing. Simultaneously, there’s a circus coming to town, so I got in touch with the local Junior Chamber of Commerce, and now we’re selling tickets at the store. It’s a win-win situation: I had 30 people in here the other night buying tickets, and that means some of them are in here ordering pizzas, too. The circus is setting up in the park right behind the shop, so that’s going to drive business. We’re trying to get the community heavily involved to make the circus a success, because we know that we’re going to benefit from it.

What’s your take on coupons?

I’m mixed on coupons, to be honest. I occasionally offer them. I work with a local storage company that buys box toppers to advertise the business and, in turn, they hand out our coupons to potential new residents in town. I tend to lean more toward regular specials. I do a Sunday-through-Wednesday family meal special that people generally know about here. Whenever we get a new customer, he gets a free family-size order of breadsticks. I think people would rather just know about what the specials are, rather than cut out a coupon and bring it in. I do a couple online to see if it works, and it does occasionally, but not a lot. I’m lukewarm on the issue.

How about social media?

That’s where it’s at, if you ask me. I’m always touting that, telling people in other industries that they need to be doing this. You have an audience who wants to hear what’s going on. I’m more a fan of Facebook than Twitter. Our Facebook fans are people in the community, whereas our Twitter followers seem to be from all over, and those are not the people who are going to be coming in to buy pizzas. Facebook is so personal. We do “happy birthday” messages every day. If a regular comes in and has a pizza on Friday night, it’s easy for me to log on and write on his wall, “Hey, man, thanks for coming in!” There’s a drip effect that keeps customers coming back. We’ve had a lot of people come in and tell us that they really like what we’re doing with Facebook.

Sounds like you really go the extra mile with social media.

You have to, if you want it to work. You can’t be generic, and you have to do it regularly—in the morning or at night, whatever. I have probably 8 to 10 birthdays each day. No, they’re not all living here, but if you have someone who moves away and you keep in contact with him, it creates a conversation, and then next time he’s in town again, he may say, “Oh, we’ll have to stop by there again.”

How about email marketing?

We’re just now getting into that. The guy I hired to do my website is working on it. We’re building a database. I’m still figuring out how I want to present myself, because I don’t want to spam people. I want them to hear from me because they want to. It’s kind of like Facebook—they choose to be a fan of my page, so I know they’re going to be interested in what we’re doing. We’ve got about 500 addresses right now, so we’re on our way.

How do you view your role as a small business in a small town?

I view myself as not just a businessman, but someone who lives here, too. We’re members of this community, and I think we’re just one cog in the machine. I believe we’re pretty well-respected. We’re in our third year now, and once you get past that two-year hurdle, you’re starting to make it in any industry. If we don’t try and help out in community-oriented events, who will? You’ve got to lead by example.