Spoilage, pricing and marketing are the big questions when deciding whether to offer slices. Here’s a look at how pizzeria owners across the country are selling slices and piling on the profits.

Toni DeCarlo, owner of DeCarlo’s in Wheeling, West Virginia, says the best crust is one that can be called, “medium.”It’s thin like an Italian bread, but doesn’t flop,” she says. Other pizzeria owners I spoke with agreed. “Medium” is best for slice crust. 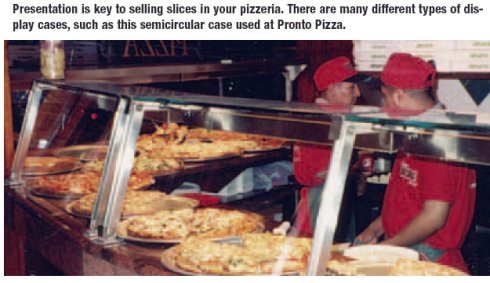 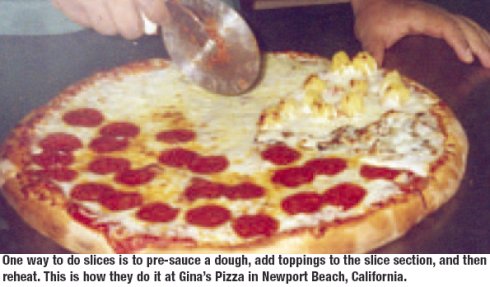 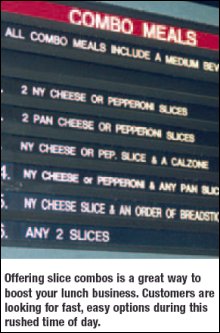 After speaking with several pizzeria owners, I found out that not everyone bakes, reheats or displays slices the same way. Toni says that they make their dough fresh every day and roll it out on trays measuring 17 by 17 inches at their slower store and 19 by 26 inches at their busiest store. They flash-bake the crust with sauce and a little provolone cheese. When the customers order it, they put cheese and pepperoni on cold and don’t reheat it. DeCarlo’s is famous for the mixture of warm and cold ingredients, Toni says. They do offer other toppings like black olives, mushrooms, green onions and sausage, if the customers request it. They don’t hold a pizza for more than fifteen minutes because of the baking method. “We have little cost when making a pizza because we just bake the crust so it’s not a problem to make a fresh one every fifteen minutes,” Toni says. “The expense is when you add the cheese and toppings.” At the busiest location of the four DeCarlo’s, Toni says they sell an average of 2,800 slices per day. The slower downtown store sells 640 slices during a busy lunch hour or two.

Kelly Persichetti, co-owner and marketing director, for Persichetti’s Gourmet Pizza & Italian Deli in Pickerington, Ohio, sells slices in her local mall. She has an even different take on preparing and selling slices. They display an 18-inch cheese pizza on the counter under glass guards to advertise the slices. They use this pizza’s slices to add toppings at the customer’s request. To ensure that there is as little spoilage as possible, Kelly says it’s imperative to have appropriate kitchen prep and to manage order quantities. She says the slices can be held for up to four hours. Three to four slices per pie need to be sold to prevent losing money on a pizza.

Kelly’s location has lots of foot traffic with several strip malls, residential areas, schools and small businesses surrounding her store. They have a separate menu for selling by the slice. They also have large menu boards displaying their slice options. Another way she lets customers know about the slices is through a slogan they use on their menu, t-shirts and website: “By the Slice…That’sa Nice!” The t-shirts are sold in the store, and dine-in customers get a discount for wearing their shirt to the restaurant. 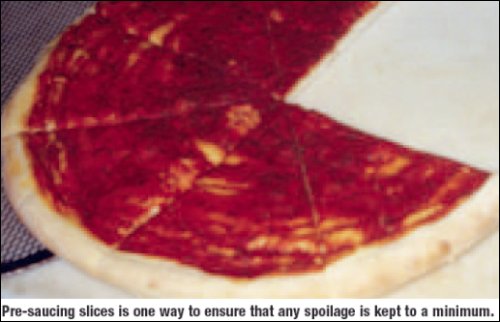 Kelly told me that slice sales depend on the time of day. Slices sold at lunch are better targeted to the working adult market. In the evening slices are ordered more by children. The slices sell at an average price of $2.25. They offer slice combos, which include a slice, salad and drink, at lunch.

In order to keep the slices from eating up the profits on whole pies, Kelly says they limit their slice menu selections. “Most customers order from the menu, however, occasionally some request non-slice menu toppings,” Kelly says. “When this happens we accommodate the customer’s request, and charge accordingly depending on toppings.”

They use their website and email to market their slices. “We’re focused on strategic branding efforts and targeted marketing,” Kelly says. They use some print advertising and do a lot of direct marketing to individuals and companies with menus and business cards. Mailings are typically sent on Tuesdays to “ensure immediate impact.”

My next call was to James Coady, co-owner of Cascarino in Queens, New York. James shared some of the finer points of preparing slices. They use a blend of mozzarella cheese for their 100 different slices, which are cooked on a traditional New York thin crust in a wood-fired oven. A 21-inch pie gives eight slices per pizza. Some of the specialty slices James sells are chicken marsala and Hawaiian. A regular margherita slice starts at $1.90.

Before the lunch or dinner rush, they pre-make 15 to 20 different kinds of pies that are displayed in a 20-foot showcase. Sometimes, a couple of pies are leftover at night, “A lot of times I donate it,” James says. “I donate it to the bars that are close by, sometimes to the firehouse or police station. Sometimes a homeless person will come in asking for pizza, I’ll give them a couple pies.”

To minimize waste, they make just enough pies to cover their lunch rushes. All pies are dumped after lunch and fresh ones are made for the dinner shift. More slices are sold at lunch, except on the weekends, when dinner dominates. “We sell about 400 slices in one location at lunch per day,” James says. His locations are not in high foot traffic areas with most of them being at street ends backing up to water.

Cascarino’s slices are advertised by being sold inside Shea Stadium, home of the New York Mets. “We’ve been there for three years,” James said. “The first two years we had a company make frozen pizzas using our sauce and cheese and had their workers prepare it. It worked out okay, but they don’t have the same ovens we have over here. This year we gave a proposal to do fresh pizza, and we took our pizza guys there. We built a pizzeria inside the stadium. They’re doing our regular pizza behind home plate. They sell slices to all the levels. They sell whole pies to the suites. They offered fewer kinds of pizza to keep pricing simple.”

James and his partner, Robert Cascarino, get no profit but advertising from being inside of Shea Stadium. “We’ve actually lost money,” James says. “They give us tickets for our customers, which is great. It works out here and there. We don’t advertise at all, not even in the yellow pages. I’m not even having a grand opening for the place that’s opening next month because the word of mouth is so good. We don’t want to get too crazy when we first open. We’re a well-known, neighborhood place. People eat out a lot today; they know good quality.”

One of the best ways to use slices in your operation if you don’t have the ability to sell them on a regular basis in your store is at sporting events or outdoor festivals. I spoke with Bradley Randall, owner of Aver’s Pizza in Bloomington, Indiana about selling slices at the local Taste of Bloomington festival. He has been selling slices at this festival for the past six years. He offered his advice on how to use the festival atmosphere as a marketing tool.

First off, he says that you shouldn’t do any festivals that don’t offer electricity or gas power for you because hauling around a generator can be a pain. He uses a slate oven to reheat his slices. The slate oven is basically a two-deck countertop style oven with a baking stone on each deck. “We use the oven to ‘crisp up’ pizzas at the site,” Bradley says. “It gives them a fresh-out-of-the-oven temperature and texture. The crowd loves to watch us work the oven, and most probably think we are cooking the pizzas on site.” He pre-bakes the pies in the store and keeps them in a holding cabinet at the festival.

Bradley says that when he first started doing this festival, he only had one store making it difficult to fully prepare the pies at his store because of the volume generated by the event. “We par-baked the pizzas we needed after we closed the night before the event,” he says. “We stored them in a chest freezer at the site and finished baking them off in the mini slate oven. They turned out great, but sometimes we got behind during the rushes as the oven cooled off and the cooking times increased.”

They now use the mini slate oven to crisp the slices because if they spend any time in the holding cabinet the crust tends to soften. Bradley says that he’s lucky to break even on his sales at an event like Taste of Bloomington. “The goal has always been to provide a sampling opportunity and gain new customers or at least remind current customers of our existence.” He says that they always take their newest signature pizza to the festival each summer. “Our current customers come up to the booth and say, ‘Oh, new pizza. I’ve been wanting to try that.’ Now, they can buy a slice. If they like it, they’ll be calling ordering a whole one in the following weeks.”