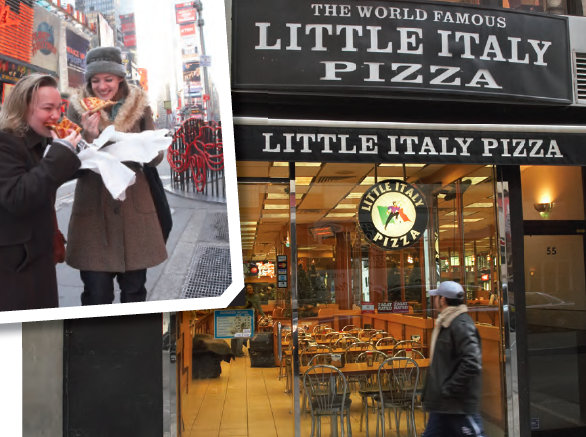 With PMQ’s New York Pizza Show right around the corner on March 9 to 11, New York was the obvious choice for our first Slice of the City, a new department that explores pizzerias across the country. Our goal was to hit all five of New York’s boroughs in one day, visiting one pizzeria in each near major tourist attractions and in notable neighborhoods. Mission accomplished!

Read on for all of the slice-by-slice details. 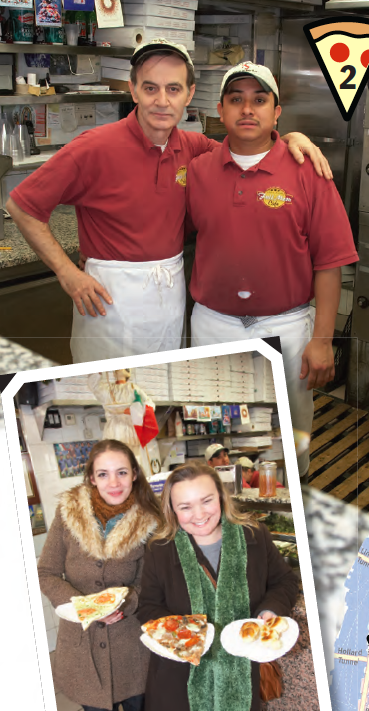 When you’re in the city that never sleeps, you can have pizza anytime. For breakfast, we stepped out of our hotel and into Little Italy Pizza (www.littleitalypizzany.com) on 45th St. in Manhattan, picking up two slices—one cheese and one pepperoni. Even at this early hour, owner Dino and his employees were busily crafting pies in anticipation of the lunchtime rush. Warm slices in hand, we made our way through the winter cold and crowds of commuters to the center median in Times Square, where we enjoyed our slices under the flashing marquees.

We boarded the subway for the Little Italy section of the Bronx, where we decided to take a poll of locals to find the area’s best pizza. Each person seemed to feel sure that he had the right answer, even though many had differing opinions. But when several people pointed to Full Moon Pizzeria on Arthur Ave., we had to taste for ourselves. After trying garlic knots, white pizza and a slice piled high with pepperoni, sausage, mushrooms and more, we had to agree with the consensus. After all, Italians know their pizza and have been coming to this neighborhood favorite for decades.

Rizzo’s Fine Pizza on Steinway St. in the famed Astoria section of Queens is known for its thin-crust Sicilian, but we couldn’t resist also trying the barbecue chicken pizza, garlic knots and a classic cheese slice. In business since 1959, the location displays vintage photos taken during the pizzeria’s early days and offers several booths for dine-in customers. Our schedule was tight, but we refused to leave any food behind; Tracy stashed a leftover garlic knot in her purse for the subway ride to our next stop. 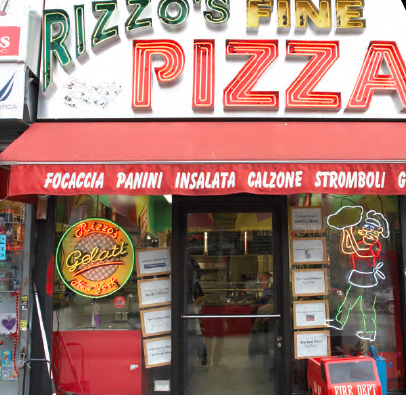 The Staten Island Ferry took us past the Statue of Liberty to our next stop, located on Bay St. in Staten Island, and we arrived at Daddy Doug’s Pizza (www.daddydougspizza.com) just in time: The owner, Doug Spinosa, was closing shop that very day. Spinosa once supplied pizzas for many a Manhattan pizza truck and is known for his Italian Knish pie. He had just run out of the famed pizza, but we were able to try his grandma pie, as well as a cheese slice and private-label Daddy Doug’s sodas. We literally used his last two plates and fi nished off the final pieces of grandma pie! But pizza’s a passion you don’t easily give up, so Spinosa has promised to join us at PMQ’s New York Pizza Show to get ideas for his next venture.

The last stop on our five-borough tour was Grimaldi’s Pizzeria (www.grimaldis.com) underneath the Brooklyn Bridge on Old Fulton St. in Brooklyn. Known for its coal brick oven Margherita pizza since 1933, Grimaldi’s has operated this location since 1990. The restaurant’s owners have invested in a cheese company in Pennsylvania to ensure the consistency of its special dry mozzarella and recently purchased 10,000 cans of tomatoes for the same purpose. Grimaldi’s further sets itself apart by roasting and marinating its own red peppers daily and creating its own sausage blend. The pizzeria is also expanding nationally, with new locations in Nevada, Arizona and Texas bringing true New York-style pizza to the masses.

With seemingly unlimited access to some of the best pizza in the world, on our last day in New York, we had to fit in a few more slices….

There aren’t many people who haven’t heard of Lombardi’s (www.firstpizza.com), America’s oldest pizzeria, located on Spring St. in the Little Italy section of Manhattan. Since 1905, the restaurant has been turning out some of New York’s most acclaimed pizzas in its original coal oven. After savoring the bruschetta appetizer and Margherita pizza, we joined the pizzaiolos in the kitchen for an up-close look at the pizza-making process. Sauce and toppings were generously applied before the pies made their trip into the nearly 900° oven, where they were hand-turned with long-handled wooden pizza peels.

Housed in a former church originally built in 1888, John’s Pizzeria www.johnspizzerianyc.com is the largest in the country, with four coal-fired pizza ovens and 500 seats on two floors. In the main dining room, guests can admire the original stained glass ceiling and windows while eating a heavenly slice of pizza with a plentiful portion of cheese. With three locations, the oldest open since 1929, John’s has received numerous accolades from national publications and is known for its “No slices!” motto, going so far as to print it on its employees’ T-shirts.

Want us to visit your city? Contact us at editor@pmq.com.