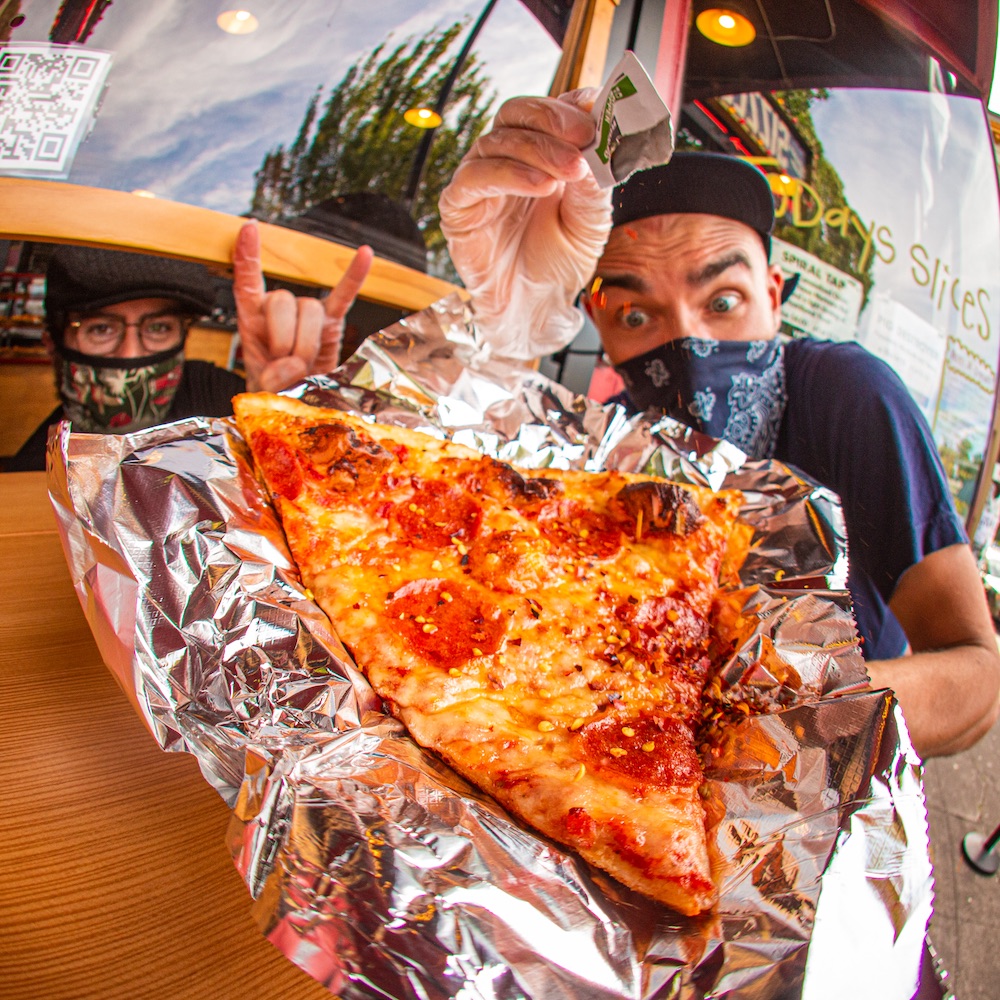 The vegan food scene may have changed dramatically over the last decade, but offering creative vegan pizzas was a focus for the founders of Portland, Oregon’s Sizzle Pie from opening day in 2011. “We felt like there was a gap there,” recalls Matt Jacobson, co-founder of Sizzle Pie. “A lot of places had a vegan pie, but no one had more, and we wanted to offer something for everyone: vegetarian, vegan, carnivore, gluten-free.”

That all-inclusive attitude has proved a winning formula: 10 years later, Sizzle Pie has grown to three locations in Portland, one in Eugene, Oregon, and one in Reno, Nevada. Combining the passions of its co-founders—art, heavy metal, pizza and beer—Sizzle Pie was designed to be a great late-night option for the diverse Portland crowd—including, of course, its vocal vegan population.

A Step Up From the Standards
While Sizzle Pie offers the normal range of go-to pizzas like the plain-cheese Void and the pepperoni Thunder and Lightning, its specialty pies reflect a relish for thinking outside the box. Jacobson notes that the most popular choice is the Spiral Tap, which combines creamy caramelized onion spread, house marinara sauce, and a light dusting of nutritional yeast.

Meanwhile, the New Maps Out of Hell starts with a base of creamy basil cashew spread, topped with seasoned soy curls and the customer’s choice of three fresh veggies. “We have a number of different sauces and bases in addition to the normal red sauce,” Jacobson says. “Our rotating selection, like the basil cashew sauce and our cilantro pesto, adds some variety to things. And while we do have vegan cheese and pepperoni pies, we like to offer interesting flavors and not just rely on the standards.”

The Perfect Product Mix
Even in a vegan-friendly setting like Portland, Jacobson notes that the explosion of vegan and plant-based in the last decade has been amazing to witness. And he adds that Sizzle Pie has always been eager to add new items and experiment with new vegan-friendly brands as the category develops.

At the same time, the general population has become a lot more open-minded about trying these alternatives. In fact, Jacobson is getting ready to package Sizzle Pie’s own vegan ranch dressing, dubbed Super Ranch, for retail in local grocery stores—and he hints that more proprietary recipes are on their way to retail. 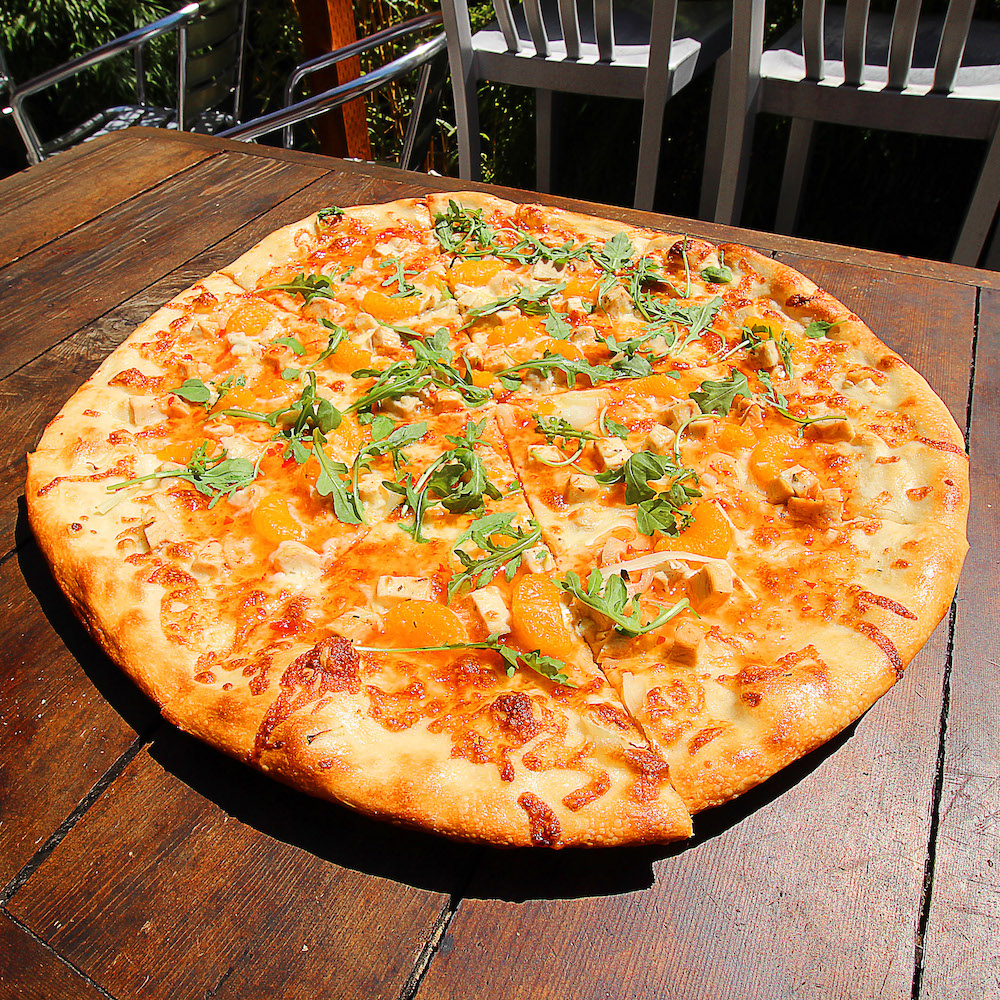 In the pizzeria, Sizzle Pie offers a mix of housemade and premade products, and staff is always willing to switch up the offerings based on the latest and greatest options. Currently, the pizzeria offers Follow Your Heart and Violife cheeses, as well as Field Roast pepperoni. To complement those products, housemade items show the staff’s creativity, from the seasoned soy curls on New Maps Out of Hell to the shredded buffalo-style jackfruit on the Buffalo 666, which also features red onions, green onions and drizzles of vegan ranch and wing sauces.

Another beloved in-house item: the tofu-based cheese dollops that grace the Steve Caballero pie, with Field Roast pepperoni and sausage, green peppers and onions. Then there are the pizzeria’s rotating monthly specials, which are often vegan (think Vegan Taco Verde), and the make-your-own options that allow for complete customization.

Thoughtful Touches
Portland’s plant-based and vegan enthusiasts clearly appreciate the efforts to craft a vegan pizza menu that’s delightfully outside the box. “Portland’s always been a big vegan and vegetarian town, and now more than ever,” Jacobson says. “We have a super-loyal following among the vegan crowd in the area, and we take it very, very seriously.”

Indeed, thoughtful touches to cater to this audience are deeply ingrained in Sizzle Pie’s operations. For example, Jacobson points to its in-store display case, which houses three levels of pies by the slice: meat, vegetarian and vegan. “We always put the meat pies on the bottom—so in case something falls off the pizza when serving, we don’t risk having the vegan or vegetarian pies contaminated with meat. We have color-coded pizza slicers. People are stoked about that.”

Sizzle Pie’s vegan pizzas even stand out to those who aren’t vegans: In July 2021, Bloomberg reported that “the authors of the upcoming Modernist Pizza, Nathan Myhrvold and Francisco Migoya, who visited more than a dozen cities and ate almost 400 pies from coast to coast,” named the pizzeria’s Spiral Tap as their favorite vegan pie in the country. “We’ve had some nice press over the years,” Jacobson admits. “But we’re also always refreshing, revamping and improving!”