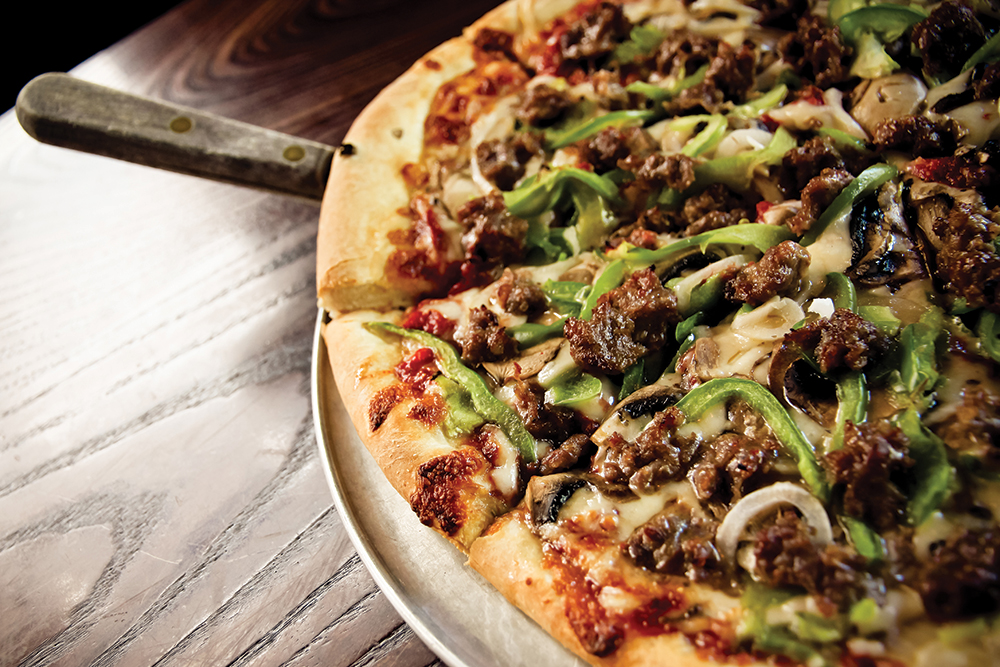 According to Cincinnati-based manufacturer Queen City Sausage, sausage creation began in ancient Europe when the domestication of animals led to a surplus of meat that needed to be preserved—but it wasn’t long before the Romans eventually learned that salt, smoking methods and spices improved the taste. In fact, the word “sausage” comes from the Latin salsus, meaning “salted.”

Today, sausage craftsmanship—both by passionate chefs as well as major suppliers—incorporates those basic tenets but allows for endless customization when it comes to this essential pizza topping. While individual tastes vary—some customers may prefer a strong fennel flavor, while others crave the spicy kick of chorizo—there’s little doubt that offering a signature sausage can turn your pizzeria into a true destination. “Since Connecticut Magazine awarded us with having the best sausage in the state, every new customer who comes in has to try our sausage pizza,” says Lori Zuppardi, co-owner of the nearly 80-year-old Zuppardi’s Apizza (zuppardisapizza.com) in West Haven, Connecticut. “It has been one of our biggest sellers as far back as I can remember.” 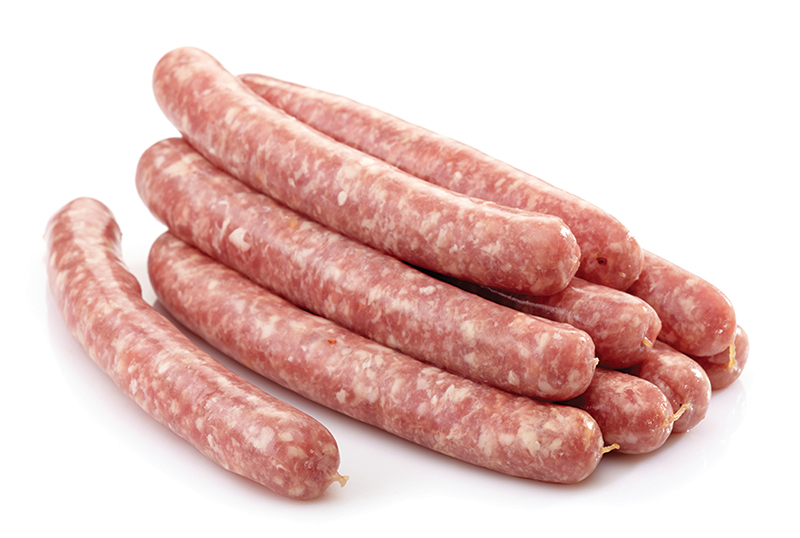 Some pizzeria operators swear by making their sausage in-house, following generations-old family recipes and painstaking prep procedures to obtain the right texture and flavor. “There are several benefits to making your own sausage,” says George Motsinger, executive chef of Slice of Vegas (sliceofvegaspizza.com) at the Shoppes at Mandalay Place in Las Vegas. “You’re allowed complete control over customization of the flavor profile, determining the fat and salt content, and keeping out chemicals, preservatives and additives. Additionally, it’s always cheaper to make it yourself, and the quality is higher because you control what cuts are used.”

But when deciding to make your own sausage, first think about the type of sausage you need. For example, Scott Randolph, managing partner of Food and Drink Resources in Lone Tree, Colorado, notes that making crumbled sausage is easier than link sausage. “For crumbled sausage, you need only meat, water and spices; it’s equivalent to making meatloaf, but without a binding agent,” he says. “And a good sausage can be very versatile—ideal for bruschetta, burgers, Bolognese sauce and more.”

Although making your own sausage has its benefits, the process requires skilled prep and labor. Zuppardi’s famous sausage begins with hand-picking pork butts each week (allowing for control over leanness), cutting the pork into strips, grinding the strips, then mixing with spices and bagging. The pizzeria routinely makes about 250 pounds once per week, which may require a couple of hours’ time and two or three staff members. “It’s not a 10-minute deal, but after a while doing the process yourself, you get a feeling for how much fat you want to see when you’re grinding the meat—you want to keep it lean, with just enough fat for flavor,” Zuppardi says. “How lean the meat is makes a big difference.” Zuppardi’s also aims for a proper balance of spices, including fennel, a popular Italian sausage additive.

At Venice Pizza House (venicepizzahouse.com) in San Diego, owner Joseph LoMedico learned his sausage skills as a child in Italy; refrigeration wasn’t a given, so he watched sausage makers in local butcher shops. To this day, he follows a similar from-scratch process, making 120-pound batches once per week: He purchases pork shoulder or butts, cuts up the meat in small pieces, and mixes in seasoning, including coarse pepper, salt and fennel seeds. “You don’t want the sausage to be too lean—that makes the product dry,” he says. “A little fat makes it moist and juicy.” Though he used to make sausage in bulk and in casing, he found that the quality of the casing varied, so he sticks to bulk now—ideal for pizza toppings (sausage outsells pepperoni at his location) as well as pasta dishes.

Of course, making your own sausage offers another benefit: the opportunity to experiment. Although he doesn’t use alternate recipes in his pizzeria, LoMedico says that, at home, he’ll try adding different ingredients—such as cheese, parsley, tomato or wine—to his sausage for extra flavor. Randolph, meanwhile, has noticed that sausage is becoming a regional item; restaurants in the Southwest are making smoked jalapeño and cheddar sausages, while East Coasters favor fennel-infused summer and Polish sausages.

Not every pizzeria will want to—or even be able to—make its own sausage from scratch, but with the range of suppliers and flavor profiles available today, there are plenty of premade options. “Two benefits of using a supplier are consistency and labor,” Motsinger notes. “The meat has a consistent quality that you can count on, and the saved labor means you can put extra effort into other areas, all without losing quality.”

Motsinger says he considers four factors when purchasing sausage from a supplier. “Quality always comes first. Then I examine taste, consistency and price, in that order, and make my decision from there.” When shopping around, he suggests evaluating the three crucial components of a great sausage: aroma, flavor and texture.

At the historic Denino’s (deninos.com), with locations in Staten Island, New York, and Brick, New Jersey, owner Michael Burke says his pizzerias go through so much sausage that it wouldn’t be feasible to make their own. Instead, the company has obtained product from the same pork store for 30 years, helping maintain consistency between both locations and ensuring freshness. “Their sausage is never frozen and homemade, without too much fat,” Burke says. “You can tell the product is fresh by the color; it should be a bright color, not brown or tinted.”

Patxi’s Pizza (patxispizza.com), based in Sausalito, California, with 11 locations in its home state and Colorado, also opts for the simpler route of obtaining sausage from a supplier. “I give kudos to anyone making their own, but to make the sausage and maintain consistency for all of our stores would be a full-time business,” laughs co-founder Patxi Azpiroz. Fortunately, he needn’t sacrifice quality or flavor: Azpiroz purchases cured sausages from a local company, Zoe’s, which makes naturally cured artisan meats, while a traditional Chicago-style sausage, infused with fennel and garlic, is shipped in from the Windy City for authentic flavor. “Good cuts of meat and freshness are important for high-quality taste, and a natural curing process serves customers who are allergic to the nitrates used in many sausages,” he explains. These two varieties of sausage also allow for menu maximization—the Chicago-style brand is used for pizza toppings only, while chorizo and other Zoe’s meats are used for a charcuterie plate, pizzas, appetizers and salads.

Finally, when buying from a supplier, Randolph suggests asking about three components of the process: from where the meat is sourced, what spice company is used (aging is “a huge factor” when it comes to spices, so make sure the spices are never older than three months), and whether the company uses filtered water, which is preferred.

In the Chicago area, where sausage is the best-selling topping, some pizzerias are thinking outside the box when it comes to production. Nick’s Pizza & Pub (nickspizzapub.com), with two locations in Crystal Lake and Elgin, Illinois, buys its No. 1 topping from a local company, but the sausage is made to the pizzeria’s specifications, using a recipe that has been in owner Nick Sarillo’s family for generations. “We order a few hundred pounds and get two deliveries per week of bulk sausage that we piece out as we make each pizza,” says Jenny Petersen, COO of Nick’s. This allows for consistency between the two locations while still giving the pizzeria an edge with a proprietary product made just for them. “Sausage is such an important product to us, so the recipe needs to be right on—and, with the amount we go through, it’s convenient to have them make it for us,” Petersen says.

“This product is special for our brand—50% of the pizzas sold chainwide have sausage, outselling pepperoni two-to-one.”
—Kirk Mauriello, Aurelio’s Pizza

Aurelio’s Pizza (aureliospizza.com), based in Homewood, Illinois, and in business for nearly 55 years, takes its sausage seriously—with 41 locations nationwide, the business goes through 11,000 pounds per week, and its Italian sausage has been selling in retail locations since 2010. The sausage was manufactured by John & Sons (owned by a friend of founder Joe Aurelio) since 1973, but when the manufacturer wanted to retire in 2008, Aurelio’s purchased the sausage manufacturing plant to keep its signature topping intact.

“This product is special for our brand—50% of the pizzas sold chainwide have sausage, outselling pepperoni two-to-one,” notes Kirk Mauriello, director of franchising for Aurelio’s. “The main benefits to having our own plant are control over its unique flavor and consistency throughout all of our locations.” Utilizing a high quality of pork and a special spice mix, the sausage is placed on the pizza raw and cooks with the pizza, which keeps the flavor in; to streamline the process, Aurelio even helped develop a machine (dubbed “The Monster”) that deposits sausage on pizzas for faster production.

As these pizzerias demonstrate, with the proper procedures in place and a great-tasting, unique product, your sausage can be a huge hit with customers. It can also become a trademark ingredient of your brand, bringing in new business, media attention, local and national awards, and a loyal customer base. When you’ve hit on the right formula, don’t hesitate to call it out on your menu, get creative with ways to use it in a variety of dishes, and post mouthwatering pics on your social media; sausage lovers will do the rest of the work by coming back for more!