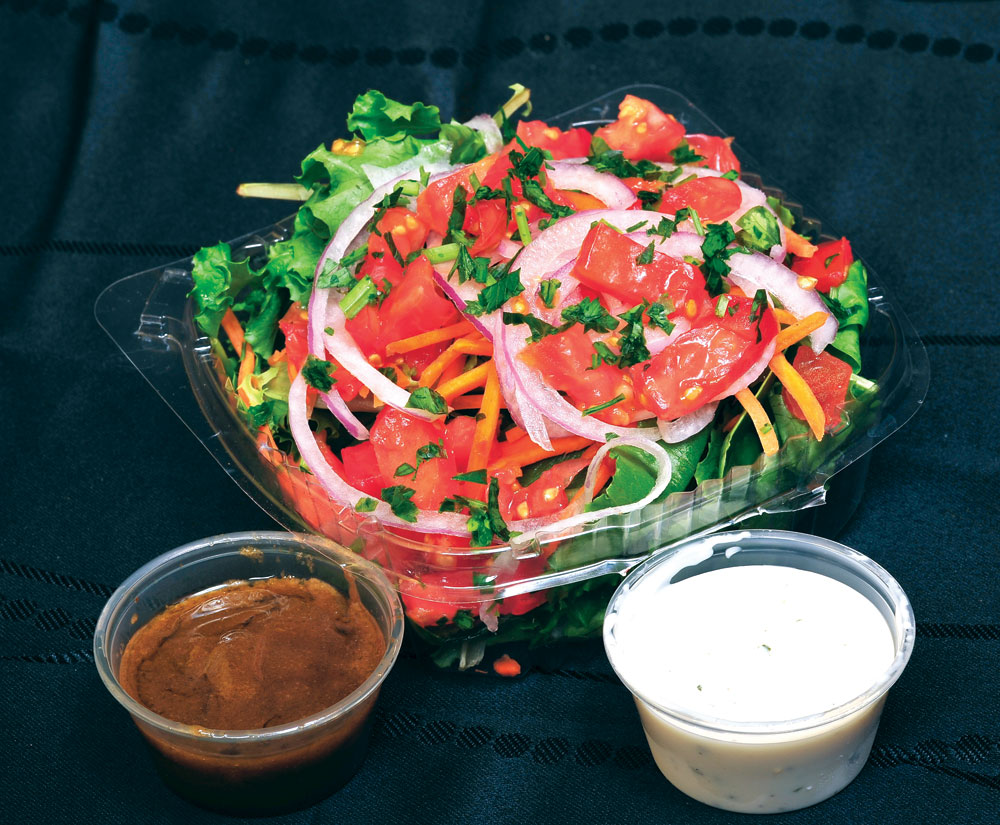 Creative chefs have been dreaming up recipes for salad dressings since ancient times. The Chinese started drizzling sesame oil, soy sauce and citrus juice on greens as far back as 5,000 years ago. The Babylonians doused theirs with oil and vinegar, while early Romans liked their salads dressed with salt and the Egyptians of Cleopatra’s era sprinkled in Asian spices.

Fast forward to the 21st century, where cross-cultural influences and an endless array of ingredients have resulted in dozens of dressings available both for salads and for dipping. The go-to trifecta in the United States has traditionally consisted of ranch, Italian and blue cheese, so any pizzeria worth its salt will have those covered. But as American taste buds get more adventurous, tangy vinaigrettes, Asian-inspired essences and simple drizzles that let the flavors of the salad shine through are becoming all the rage.

As a pizzeria operator, you should keep your tried-and-true dressings up to snuff, but you should also stay on top of the latest trends to keep customers interested and coming back for more. And don’t forget to include low-fat dressing options for calorie-conscious customers—experts suggest offering healthier versions of at least two or three of your most popular flavors.

Pretty much anyone who likes salad likes salad dressing. But what are the most popular dressing flavors? According to the Association for Dressings and Sauces, here are the top 10 regular (full-fat) salad dressings:

Ranch dressing has long been a staple in pizzeria kitchens and on supermarket shelves, and it remains the No. 1 dressing choice, according to the Association for Dressings and Sauces.

This creamy blend of buttermilk, mayonnaise and various spices—invented at the Hidden Valley dude ranch in California in the mid-1950s—has transcended its humble beginnings as a condiment for salads only and is now considered the king of dips, used for everything from cheese sticks to wings to pizza crust.

“Our homemade ranch is a pretty common request from our guests,” says Eric Ozarowski, chief marketing officer at Nick’s Pizza & Pub (nickspizzapub.com) in Crystal Lake, Illinois. “The secret is in the heavy cream, buttermilk and mayonnaise—and obviously the spices, but we can’t give it all away. We make several other dressings in-house, too, because we take pride in serving an amazing and consistent product.”

In fact, a standout dressing can lead to supersizing upsell opportunities for Nick’s. “We currently do not sell our dressings by the bottle, but we have had several guests ask that we make larger portions for them so they can take it home,” Ozarowski says.

Lori Bliss Hill, owner of Enfield, New Hampshire’s Enfield House of Pizza (enfieldhouseofpizza.com), says ranch is easily her best-selling dressing. “We use Ken’s Steakhouse Ranch in packets, and we have a large population of customers who like to dip their crust in it,” she says. “They don’t dip their slice in it, but some do like to drizzle ranch over the whole slice.”

Vinaigrettes are another popular choice and can be prepared with a variety of herbs, spices and acids, tailored to bring out the flavors in any type of salad. In fact, Hill says that her housemade dressing—made with olive oil, a balsamic vinegar blend and a top-secret array of spices—is Enfield House of Pizza’s second top seller.

“We’ve seen a jump in the use of the Greek vinaigrette, and we attribute it to our new line of salads that are loaded with ingredients such as tomatoes, olives, banana peppers and shaved Parmesan,” says Peter Wise, vice president of marketing for Marco’s Pizza (marcos.com). “The Greek vinaigrette seems to bring out the flavors of the fresh vegetables. While ranch and blue cheese dressings are pretty cut-and-dry, vinaigrette is limited only by your imagination.”

At Pizza Rustica (pizza-rustica.com), a multi-store chain headquartered in Miami Beach, Florida, most salads are served with a housemade balsamic vinaigrette, says Melissa Mokha, the director of support and development. “The base is a high-quality extra-virgin olive oil and tasty balsamic vinegar,” she says. “We then add fresh thyme, garlic, oregano, brown sugar and shallots and blend everything together. The result is amazingly tasty. It has a semi-thick consistency, and that’s what makes it richer and more flavorful.”

“Each and every salad component must be held to a standard of excellence. Utilizing superior-quality extra-virgin olive oil produced from small artisanal producers is a good start.”
—Chef John Coletta, Quartino Ristorante & Wine Bar

According to research by the Association for Dressings and Sauces, most restaurants that offer a house dressing report that it’s the most popular flavor on the menu. Of course, a high-quality housemade salad dressing begins with high-quality ingredients. Located in Chicago, Quartino Ristorante & Wine Bar (quartinochicago.com) features a selection of gourmet salads that make a simple yet elegant accompaniment to any meal. Chef John Coletta says he has very high standards when it comes to his salads and dressings. “Utilizing superior-quality extra-virgin olive oil produced from small artisanal producers is a good start,” he says. “However, each and every salad component must be held to a standard of excellence. Therefore, the salt should be a pure sea salt from Mediterranean waters. And the fragrant black or white pepper should be no longer than three months dried and ground.”

But Coletta’s just getting warmed up—he also uses vinegars made from wine, preferably a wine varietal that is indigenous to the region that the dish is from. He prefers honey produced from a cultured environment with an age of no more than six months and superior lemons that emulate the tropical varieties found in southern Italy. Finally, he says, “aceto Balsamico from Modena, Italy, is another element of consideration; utilizing commercially produced aceto balsamico will only result in a facsimile version of fragrant cuisine.”

But consistently meeting such singularly high standards can be easier said than done, Coletta admits: “Although these concepts are mostly known to all good chefs, they are rarely found in a consistent manner, often due to market volatility, economic instability and customer price preferences.” But he usually finds a way. Quartino’s Caprese salad is drizzled with aged balsamic syrup, a sweet, syrupy reduction of the Trebbiano grape made by infusing aceto balsamico with garlic, bay leaves, thyme, Italian parsley and black pepper. Balsamic syrup yields “deep, dark, rich, robust and intense flavors,” Coletta says, although making it takes a little time and work. The mixture, he explains, should be “simmered slowly until it lightly coats the back of a spoon. It is then strained through a fine mesh strainer and allowed to cool. Placing the balsamic syrup into a plastic squeeze bottle allows for efficient control and accuracy while plating.”

It’s nearly always cheaper to make your own dressing than to buy a bottled one, and that “homemade” touch can elevate your salad menu above the competition. However, especially for takeout and delivery shops, prepared dressings save labor and provide convenience; instead of laboring to produce your own dressing, you can just grab a packet or prefilled plastic cup to include with a salad order. “Marco’s Pizza uses dressings from Marzetti’s, with predominant use of Italian and Ranch,” says Wise. “The full range of dressings seems to complement the fresh croutons that Marco’s handmakes and bakes on site each day.”

Some operators create their own signature dressings by starting with bottled dressings, sometimes combining two or more, and stirring in additional ingredients. But many still prefer to build their dressings from scratch and bring more exotic elements into the mix. Ethnic flavors, for example, are becoming trendier as the U.S. population diversifies and Americans discover new and exciting tastes. Flavors such as mango and jalapeño reflect a growing Hispanic influence, while sesame and ginger, staples of Asian cuisine, are gaining popularity as well. And, as more Americans strive to eat healthier foods, many have turned to so-called “superfruits.” Packed with antioxidant properties, these fruits—including pomegranates, blueberries and acai berries—make zesty additions to ordinary vinaigrettes.

In fact, to get kids interested in healthful, low-calorie eating, some nutrition experts are developing fruit-based dressings specifically with children in mind, according to Food Management, a magazine for noncommercial foodservice directors, managers and chefs. Kid-friendly nomenclature plays a big role in these dressings. Referred to as “extreme” dressings, they sport tummy-tickling names like Orange Dreamsicle, made with orange juice, mandarin oranges and yogurt, and Extreme Strawberry, a concoction of orange juice, strawberry/banana juice, fresh strawberries and honey. But the most popular of these so-called “extreme” dressings is, perhaps, also the most predictable one: the Peanut Butter and Jelly, made with peanut butter, grape jelly, grape juice and salad oil.

If you’re looking to create your own signature dressing but don’t have a clue where to start, consult with your bottled dressing supplier—your representative may be able to help you formulate a unique blend especially for your restaurant. And don’t be afraid to experiment—mix two or more commercial dressings or sauces, add your own herbs and sample the results. For example, blend one part French dressing with four parts blue cheese dressing or add ½ cup of Worcestershire sauce to a gallon of Italian dressing. If you really want to get adventurous, combine one gallon of mayonnaise with one quart of salsa and two teaspoons of hot red pepper sauce for a Mexican-inspired dressing.

Keep tinkering around, adding herbs or seasonings here and there, and you may hit upon exactly the right combination. The possibilities are limitless, and fortune, as they say, favors the bold!