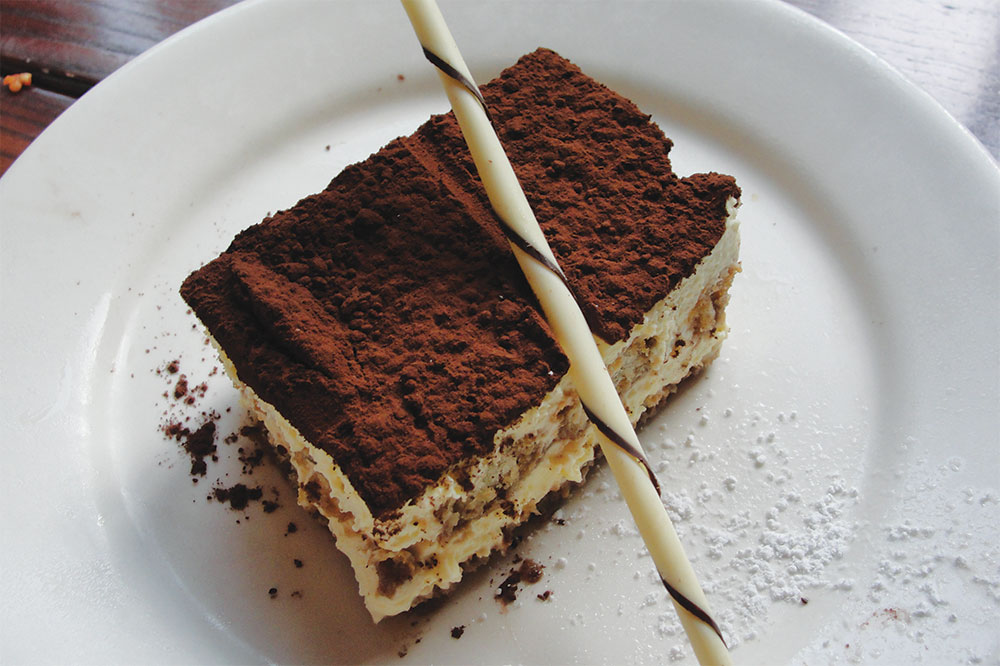 In years past, dessert was often treated as an afterthought on pizzeria menus, but thanks to the rising popularity of dessert pizzas, sweet breadsticks, calzones, gelato and traditional Italian confections, that’s beginning to change. Pizzeria operators have come to realize that patrons usually have room (or can make room) for something sweet. Why not make sure they buy it from you instead of that sweets shop down the street? After all, desserts can be priced to generate a much bigger profit compared to an entrée. And even the most health-conscious customer can be tempted by delectable sweet treats.

When it comes to desserts, customer selection often boils down to what someone is craving. After a big meal, guests often desire a small dessert or one that can be shared with the group. In the summertime, many lean toward fruit-based desserts that feel light and healthy. In the winter months, comfort desserts—such as warm cinnamon apples or decadent chocolate cakes and brownies smothered in hot fudge and ice cream—often fit the bill.

For pizzerias, serving desserts that can typically be found in an Italian bakery is usually a good place to start. “When guests think of pizza, many think, ‘Italian,’ which is why tiramisu, gelato and other traditional Italian desserts are popular and expected on a pizzeria dessert menu,” says Linda Duke, an industry consultant and owner of San Rafael, California-based Duke Marketing. “Try offering new twists on traditional Italian favorites in order to stand out.”

Other pizzerias, meanwhile, have ventured beyond traditional Italian fare, exploring options ranging from sorbet to s’more calzones. Some have even added desserts to their delivery menus: Sunset Pizzeria (sunsetpizzeriaonline.com), with three locations in Las Vegas and Henderson, Nevada, offers delivery of its chocolate cake, homemade cannolis and cheesecake. The moneymaking possibilities with desserts are virtually endless—it’s just a matter of studying the trends, familiarizing yourself with your customers’ cravings and encouraging waitstaff to upsell at every opportunity.

Dessert trends may come and go, but chocolate is forever. Humorist and children’s book author Sandra Boynton once said, “Research tells us 14 out of any 10 individuals likes chocolate.” Her observation wasn’t far from the truth: Statistics from Datassential Menu Trends shows that chocolate is served in 65% of all restaurants and 59% of all pizzerias. Lorraine Platman, the owner of Sweet Lorraine’s (sweetlorraines.com), which has been serving desserts (along with pizzas, quesadillas and a broad range of other fare) for more than 30 years in Southfield and Livonia, Michigan, is quick to confirm those statistics. “Chocolate always sells best,” she says. “Apples are the runner-up.”

In addition to chocolate, Datassential lists vanilla and chocolate chip as trending dessert flavors, along with fruit flavors such as apple, strawberry, banana, coconut and lemon. And while quick-service and fast-casual chains are more likely to serve handheld desserts—i.e., cookies, brownies and dessert bars—independent restaurants frequently serve premium desserts, such as tiramisu, crème brulee, ice cream, cheesecake and bread pudding, according to Datassential.

Many restaurateurs deliver a bit of nostalgia on their dessert menus, serving up red velvet cake, s’mores and childhood favorites such as ice cream sandwiches. Meanwhile, artisan donuts, cupcakes and alcohol-flavored desserts for adults are also gaining popularity. And we can’t forget the salty-sweet combo, which is now accomplished using local herbs, sea salt, olive oil and, of course, bacon.

“Philosophically, you eat with your eyes. If your server shows you something amazing, you’re more likely to order it than you would when you’re just reading about it on a menu.”
—Lorraine Platman, Sweet Lorraine’s

As owner of Claysburg Pizza (claysburgpizza.com) in Claysburg, Pennsylvania, Paul Medasie hit upon a signature sweet that attracts local and nonlocal customers alike. “We’ve been selling a dessert called Sticky Sticks for close to 15 years,” he says. “We sell about 200 orders of them per week, and they’ve become known as a ‘must-have’ when visiting our area. We also sell about 100 orders per week of our Monkey Bread Nuggets, which we’ve been selling for almost four years. Both desserts are made from scratch at our pizzeria and are unique to our brand. I got the inspiration for the desserts from the times when my friends and I were craving something sweet and I would whip something up. They’re each a variation on the classic bakery sweet—cinnamon rolls.”

In Dallas, Cane Rosso (ilcanerosso.com) and Zoli’s NY Pizza (zolispizza.com), a pair of concepts owned by Jay Jerrier, have become nearly as famous for their desserts as for their pizzas. Popular items include Nutella brownies, S’more Calzones, zeppole, Diavoletti (fried dough with Nutella, sea salt and caramel), tiramisu and Bella Mella (vanilla bean mascarpone, Granny Smith apples, sea salt, caramel and powdered sugar). “I'd say the S'more Calzone is probably the most popular,” Jerrier says. “It's just mini-marshmallows and chocolate chips inside a calzone. It works because of the 900° oven, which melts the chocolate but doesn't liquefy the marshmallow because it cooks so quickly.”

Meanwhile, the Cheesecake Calzone makes guests drool at Big Daddy’s Pizza in Ochlockonee Bay, Florida. “It's nothing fancy, but it sells like hotcakes,” says co-owner Chris Miller. “Our shop is in a very seasonal area, and we get bored in the off-season. We just play around in the kitchen, looking for new ideas. The calzone was made by placing cheesecake, graham cracker and fruit inside dough folded as a calzone.”

Diet restrictions have seen some desserts heading the healthy route in recent years, with the most prevalent being gluten-free options. “Customers used to ask me for low-fat options, but now they want gluten-free,” Platman notes. “We’re just learning how to safely integrate gluten-free items into the menu. We offer a flourless chocolate cake and gluten-free sorbet, but I want to make sure we’re extra careful when anyone mentions they are gluten-intolerant.” More and more restaurant operators are looking into this option, as Datassential numbers show that, while the word “gluten-free” currently shows up on just 2% of all restaurant menus, this number represents a growth of 788% from 2009 to 2013.

Of course, many customers are still counting calories, so portion control continues to be as important as ever. Thus, miniature desserts are still on-trend, according to Duke. “Guests are still cutting out sugar, which means dessert sales suffer,” she adds. “Operators are looking to offer a bite or two of a sweet dessert for fewer calories.”

Additionally, Duke says that desserts like Nutella pizza gain new fans each day, along with flourless chocolate cake, gelato and unique twists on Italian favorites, such as the Broken Cannoli Bowl from Villa Enterprises—fresh-made cannoli filling with cannoli chips.

The Art of the Upsell

Even diet-conscious customers can be tempted to order a dessert with a little suggestive selling, Duke notes. “There’s nothing better than servers making the suggestion to guests at the beginning of a transaction: ‘Save room for our amazing desserts!’ Suggestive selling and a visual display of desserts is essential to make mouths water. However, stale, sloppy desserts that look unappetizing on display can have the exact opposite effect and turn guests off.”

Platman doesn’t actually list desserts on the Sweet Lorraine’s menu. Instead, servers bring a tray to every customer’s table, showcasing the selections—which change weekly—at the end of the meal. The stratagem works beautifully, she says, with 27% of customers purchasing desserts. “Philosophically, you eat with your eyes,” Platman says. “If your server shows you something amazing, you’re more likely to order it than you would when you’re just reading about it on a menu.”

In the summertime, Platman’s customers enjoy desserts featuring fresh Michigan produce, such as apricots, while in the winter they may find dates stuffed with almond paste and caramel. “Some of our customers come in specifically for dessert,” she adds. “We want to wow people at the end of a meal with our desserts. When our Apple Brown Betty comes out of the kitchen, people aren’t expecting it—they feel warm and fuzzy, and they want it.”

If you’ve been hesitant to add desserts to your menu, start by trying out a few specials and see how they fare. You can also build interest in your dessert menu by passing around samples after a meal and asking for customer feedback. From a business standpoint, desserts generate healthy profit margins, and many can be created using items you already have on hand (such as sweet pizzas and calzones). Test out recipes with your staff and learn which types of desserts are successful at other restaurants. Trust your own sweet tooth, too. If you and everyone around you like a certain dessert, there’s a good chance your customers will enjoy it as well!