Sbarro plots its comeback with a pair of new concepts and big plans for growth. - PMQ Pizza Magazine 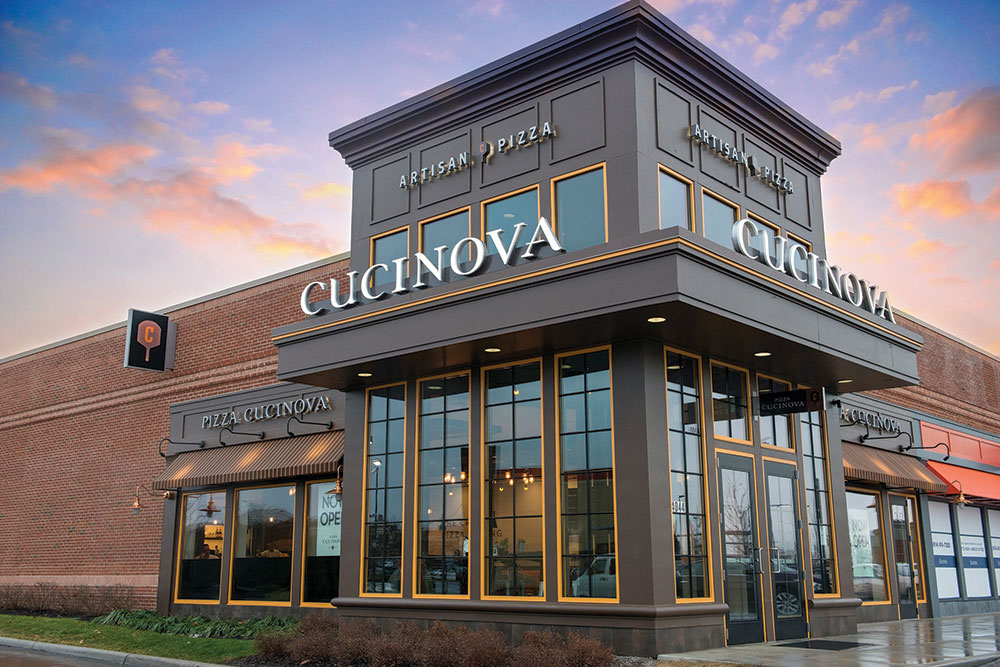 After emerging from Chapter 11 bankruptcy in early June, Sbarro (sbarro.com)—once the quick-service pizza chain of choice for mall rats everywhere—hopes to bounce back with a new entry in the fast-casual segment: Pizza Cucinova (pizzacucinova.com), now with two locations in Columbus, Ohio. And if the concept takes off—and if a planned third concept called Brooklyn Fresh has similar success—it could spark a remarkable turnaround for a company that looked poised to go the way of the dinosaur just a few years ago, thanks to a presence limited almost exclusively to airports and food courts in slowly dying shopping centers.

The first Pizza Cucinova opened its doors last October, and the second one followed in March. Specializing in made-to-order Neapolitan-style pies baked quickly in gas- and wood-burning Woodstone ovens, the concept’s strength lies in part in the simplicity of its menu, says Sbarro CEO David Karam, a former Wendy’s executive who joined Sbarro in early 2012. “Let’s do fewer things better—that’s the philosophy here,” he says. “The menu’s tight, with basically two product lines—pizza and salads, plus one dessert item. We’ve tightened the focus on the menu, so we can really be best in class. I think that’s the expectation of the customer today.”

Sbarro made headlines in early 2013 when the company filed for Chapter 11 bankruptcy protection, aiming to reorganize and reduce its debt. The plan called for the closure of more than 180 company-owned stores and cutting about 85% of the company’s outstanding debt. Its headquarters moved from Melville, New York, to Columbus to further reduce expenses and to launch the new Pizza Cucinova concept.

It was the second bankruptcy in three years for Sbarro, but Karam says the company still maintains “a very strong brand position” both in the United States and overseas. “Frankly, the brand has been grounded primarily in the food courts of malls and has suffered over the years as a result of declining traffic in those venues,” Karam admits. “So the strategy we have crafted…is to really optimize the performance of the Sbarro brand. We’ve had very strong growth internationally and some stagnation and decline domestically in the past seven or eight years. So our challenge is, how do we reinvigorate that domestic growth and support and accelerate the international growth? We think the best way to do that is to tighten the focus on the brand.”

That means rethinking the Sbarro menu—more pizza, fewer steam-table items—while sticking with shopping centers and airports, where customers still crave a quick slice to go. “We’ve made a lot of improvements in the product quality,” Karam notes. “We’ve put into place a number of operating disciplines to assure that the execution is really consistent with the recipe and the formulation of the product. We’ll continue to go down this path of [positioning Sbarro] as a very high-quality offering designed to play in these high-traffic venues.”

Meanwhile, Sbarro execs knew a good thing when they saw it, and that good thing was the fast-casual boom that has helped smaller chains like MOD Pizza (modpizza.com), Top That! Pizza (topthatpizza.com), Pie Five (piefivepizza.com) and PizzaRev (pizzarev.com) rocket to success. Pizza Cucinova was developed to capitalize on this burgeoning market. “It has become a more crowded space, but we think we have crafted a best-in-class entrée,” Karam says. “It’s truly a Neapolitan-style product. The flour is a Caputo flour from Italy. Many of the ingredients are locally sourced, and it’s all fresh and prepped every morning.”

Lewis believes the artisanal movement is more than a passing fad. “When we talk about artisan, made-from-scratch, custom-built pizza—these things may have been fashions and trends years ago, but now it’s becoming a culture,” he says.

“We’re not just looking to grow rapidly. We're looking to make sure we attract the right franchise relationships.”
—David Karam

Pizza Cucinova follows the standard fast-casual model, with a large menu board behind the ordering line, where pizza makers build pizzas to the guests’ specifications. Pies at Pizza Cucinova come in two sizes—10” and 12”—and start at $5 and $8 for plain pies. Guests can begin with a choice of three bases—white, red or green—and add toppings for $1 apiece. Nine specialty pies fill out the menu, including the Margherita, Steak and Gorgonzola, Pizza di Parma, Wild Mushroom, Quattro Carni, and Bruschetta and Sausage. Salads include the Caesar, Mixed Greens and Mediterranean at $4 and $7, plus the Roasted Beet Salad for $8. There’s one dessert item—a cheesecake baked fresh every morning—and a selection of craft beers, wines, sodas and tea.

Master chef Tony Seta, known for his work at Bonefish Grill and Carrabba’s, helped develop the Pizza Cucinova menu, along with Lewis and Sbarro executive Anthony Missano. “Many of those pizzas—like the Pizza di Parma and the Wild Mushroom—are historic recipes from Naples,” Karam points out. Even so, the majority of guests opt to customize their pies. “We let the customer be the artisan so they can create their own recipes,” Karam adds. “That’s the essence of the brand. I would say 60% of our customers choose to make their own. I typically choose a pizza off the menu because the recipes are really beautiful.”

In addition to Pizza Cucinova, Sbarro plans to roll out a third concept, called Brooklyn Fresh, this year. “It’s a step between Sbarro and Pizza Cucinova,” Karam says. “It’s a mainstream, fast-casual, urban-Italian restaurant with made-to-order New York-style pizza, pastas and salads and beautiful proteins, sauces and toppings, all at a very reasonable price. It’s a smaller, tighter footprint, more of a mainstream concept with a somewhat broader appeal than Cucinova, which is more select.”

Once the new concept opens, Karam’s company will have carved out three niches for itself—the quick-service Sbarro brand; the higher-end, fast-casual Pizza Cucinova; and the midscale Brooklyn Fresh.

“I think the growth potential is enormous,” Karam says. “We have discussions going on with a number of prospective franchisees for all of these concepts. It’s not just going to be a franchise model. We’ll have both company-owned and franchise [stores], and it’s going to be a partnership. We intend to develop the areas we pursue in a collaborative and selective way with franchisees.”

In addition to running Wendy’s for years, Karam still owns 175 Wendy’s restaurants, so he knows a thing or two about restaurant franchising. He says franchise partners for Sbarro, Pizza Cucinova and Brooklyn Fresh will need to have a solid understanding of the food business. “The concept has a high culinary content, so [we expect them to] understand the delicacy of the product and have an appreciation for the culinary dimension and the exacting specifications for the product. We’re not just looking to grow rapidly. We’re looking to make sure we attract the right franchise relationships.”