As we fight our way through winter with promises of warm weather, it will be pizza—not the blossom of spring—that customers will associate with green at Sarpino’s Pizzeria locations around the country. That’s because the pizza franchise famous for its authentic Italian pizza recipes is shining a light on its Toyota® Prius delivery car incentive program its provides for franchisees, ensuring that at least one Prius is provided for each Sarpino’s location. Combined with its enhanced point of sale (POS) system, which provides customers with marketing tailored to their specific pizza tastes, Sarpino’s is putting a new spin on tired-and-true ways of delivering pizza. 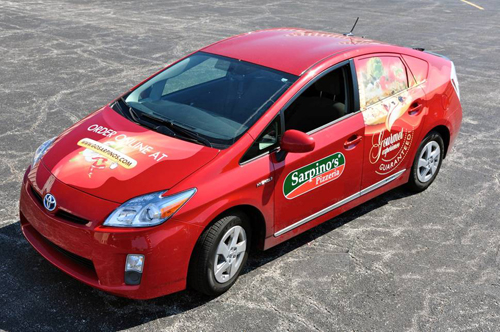 According to Dmitry Shapiro, President of Sarpino’s, the Prius incentive program was born four years ago out of a desire to minimize the impact each pizzeria has on the environment. “We wanted to do our part and make Sarpino’s greener,” says Shapiro. “Issuing Prius cars to delivery drivers, which are consistently recognized as some of the greenest cars on the road, let’s us do that in a big way.” Shapiro notes that every location has at least one Prius, while several have two or three, and a Humble, Texas location has four. Beyond lessening the franchise’s impact on the environment, Shapiro notes that the cars are adorned in Sarpino’s branding. “Members of the community see the cars and instantly know what Sarpino’s stands for, while delivery drivers save money on gas. It’s win-win.”

Meanwhile, customers now find that their favorite Sarpino’s location “learns” of their pizza preferences and adapts to provide them customized marketing through the new POS system. This, Shapiro says, can be useful for anything from providing repeat customers with discounts on their favorite food mailed to their front door, to quicker deliveries to favorite locations. As with the Prius incentive program, Shapiro notes that drivers and customers alike benefit from this system. “The POS system expedites deliveries for repeat customers and drivers who make quick deliveries will be rewarded,” says Shapiro. “At Sarpino’s, we aren’t trying to reinvent pizza delivery, just make it better.”

Sarpino’s Pizzeria currently has 48 fully operational locations in eight states across the U.S. They have a total of 65 fully executed franchise agreements. They expect to have 65 locations open by the end of 2015 and 350 locations within five years. Target markets with current store opportunities include Illinois, Minnesota, Missouri, Ohio, New York, Florida, Georgia, Iowa, Pennsylvania, Virginia, and Washington, D.C.