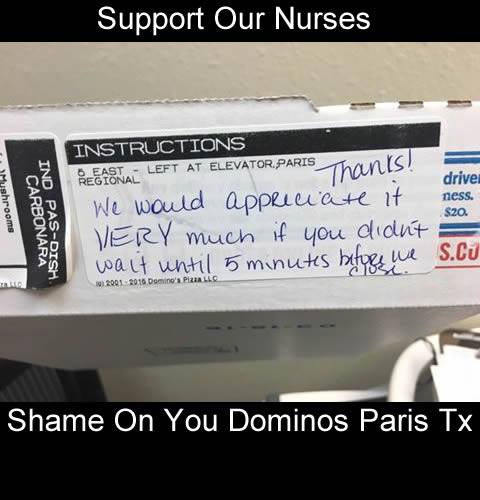 A rude handwritten note can go viral just as quickly as a dumb tweet—especially when it comes from pizza makers at a Domino’s store. That’s a lesson a Domino’s franchise in Paris, Texas learned the hard way this week.

It started innocently enough on March 30 when a night-shift nurse at Paris Regional Medical Center called in a pizza order to the local Domino’s shop. The pizza was delivered with a little something extra—a handwritten note on the side of the box that read, “Thanks! We would appreciate it very much if you didn’t wait until 5 minutes before we close.”

Kerry Miller, a friend of the nurse, saw the note and posted it on Facebook the next day. She urged her friends to share it around on social media, adding, “Nurses work long hours and eat when they can as they take care of our loved one. A business is open until they close and are in business to serve the public.” She went on to say that Domino’s owed the nurses an apology and “as much pizza as you can deliver.” Miller’s post concluded, “This is a disgrace that any business has this attitude towards any customer.”

Not surprisingly, the post began to make the rounds on social media, and before long the news media picked up on it. The Paris News and Dallas/Fort Worth TV station KTVT, a CBS affiliate, reported on it, and before long the story had spread all around the country and ended up on FoxNews.com.

According to KTVT, the Domino’s franchise would not comment on the kerfuffle but company spokesman Tim McIntyre issued a canned statement that read, “We do not condone or encourage this kind of behavior or one-sided ‘dialogue’ with our customers.” Domino’s would not comment on whether the employee would face any kind of disciplinary action for the note.

Read the story on FoxNews.com.