When in Rome: Could Roman-Style Pizza Be Your Next Big Moneymaker? - PMQ Pizza Magazine 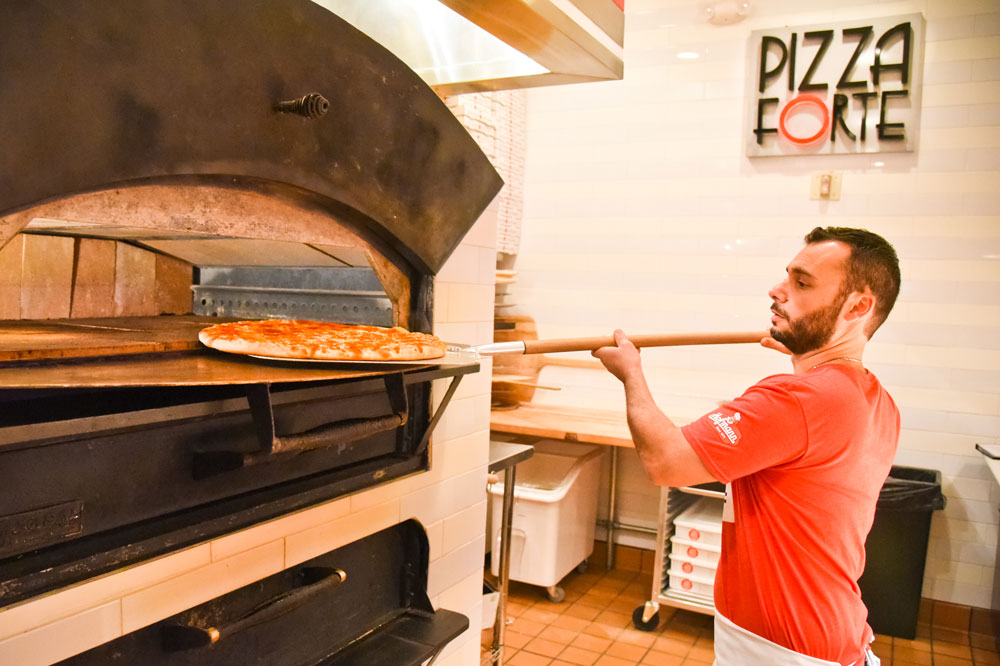 Perhaps there is no one definitive Roman-style pizza, but that hasn’t stopped curious food hounds, ever on the lookout for something new to devour (and share on social media), from taking an interest in this burgeoning variety, both in the United States and beyond.

Is this style poised to be the next Neapolitan, taking the country by storm like Caesar’s troops tearing through Gaul? Time will tell, but experts at the Roman Pizza Academy in Miami believe all roads may, in fact, lead to Rome. After all, they’ve fielded calls from interested clients since opening day earlier this year—even from far-flung locales like Argentina and Dubai. “The trend is growing very quickly behind the scenes,” says Alex Manzo, a partner at the academy.

“Roman pizza is having a moment right now—not just in the United States, but all over the world,” agrees Massimiliano Saieva, Miami-based owner of Pizzarium, a Roman-style concept, as well as partner, lead instructor and master pizzaiolo at the academy. “The round pizza has peaked worldwide, and there’s a lot of competition between pizzaioli. This is a new style, bringing along new opportunities.”

​Saieva notes that Roman pizza has roughly 60 years of history in Italy, but Manzo believes the style dropped in popularity over time, as product quality suffered while quick-buck makers mindlessly fed masses of Roman tourists. In the last few years, Saieva says, skilled dough craftsmen developed a sophisticated technique for dough prep, bringing the style back to the forefront. And, at the five-year-old Pizzarium, Saieva has been one of its pioneers. “We’ve been keeping an eye on this trend for the past two, two-and-a-half years,” Manzo notes. “Some pioneers of the style were ahead of their time and have already closed down, but now the trend is rising, and we think today’s operators will have tremendous success.”

So what are the characteristics of this rising style? That might depend on whom you ask. “There are different versions of what people call a Roman style,” explains Mimmo Ferraro, owner of Pizza Forte, with four locations in Las Vegas. “You can go to Rome, and everyone sells what they call a ‘Roman-style’ pizza; it could be round, square, any shape or thickness. But, generally, it’s crunchier, less doughy or gummy than a Neapolitan style. Pizza al taglio, for example, is cooked in a pan, with a crunchy bottom and a two- to three-day fermentation, but toppings are always kept simple. You don’t see a supreme pizza in Italy!”

Saieva sings the praises of this pan-cooked type, with its crunchy exterior enveloping a light, soft, airy dough that melts in the mouth. To achieve this yin-and-yang yum factor, he creates a highly hydrated dough—80% to 100% hydration (compared to the 60% of Neapolitan styles)—for his pizza al taglio, which means “pizza by the cut.” There’s also a different baking and presentation process: Pizza al taglio is cut with scissors and often displayed in-store to woo customers. Italians sell the cuts by weight, but Saieva doesn’t think that trend will catch on Stateside; rather, he sells his portions in equally sized rectangular slices. “When you try this pizza, you understand the difference between [al taglio] and a focaccia or a Sicilian pie,” Saieva says. “I’ve seen people cry when eating it.”

Indeed, he believes Roman remains a unique style because it marries the artistry of a chef with the product of a pizzaiolo, for a result that’s “more than a pizza,” he says: easy to buy and eat (even while standing), but potentially as sophisticated as a high-end restaurant masterpiece. Manzo compares it to a roll of sushi in terms of the possibilities of artful presentation, with endless topping combos.

Making Roman-style pizza right can be a little tricky. Saieva teaches his Roman Pizza Academy students to tweak the oven-tending according to the pizza; he may adjust temperature settings at the top or bottom of the oven to ensure a thorough, consistent bake for each pie. He compares it to driving a car—just as you’d adjust according to terrain, each pizza may require slight adjustments, like cooking faster or slower, to develop the style’s signature crunch. Manzo agrees, adding, “This is a very technical product, and you must control the temperature, length of ferment, and more. And you have to consider environment; the rules will change from humid Miami to Denver’s dry climate, for example.”

Ferraro, for his part, learned to craft a Roman-style crust through key partnerships with experienced foodservice experts and plenty of trial and error. His dough is fermented for two days to develop flavor, while top-quality yet simple ingredients, from mozzarella to tomatoes, emulate the Italian approach to freshness. He also uses a lower oven heat (about 600˚) to cook the style’s crunchy crust in three to three-and-a-half minutes.

Ferraro serves by the slice or the pie, baking in a square pan made of aluminum and iron, which retains heat well and firms the bottom crust; he also greases the pan with olive oil and adds some vegetable shortening in the dough recipe itself to amp up the crunch factor. And, he reports, the style can prove successful even when baking in various oven types. “We have different locations, and some have different ovens,” he explains. “I’ve done these even on conveyor ovens. You just go through trial and error to nail it down!”

“When you try this pizza, you understand the difference between [al taglio] and a focaccia or a Sicilian pie. I’ve seen people cry when eating it.”
—Massimiliano Saieva, Pizzarium

Ferraro decided to offer a Roman-style crust, alongside his other options (including New York and Sicilian), after spending time in Italy. “We like people to have options, and I definitely think Roman pizza is growing in popularity,” he says. “More customers are so educated about their food and are open to trying different things, away from the norm.”

Manzo says Roman-style pizza offers a plethora of benefits for the operator. For example, it can be served in a small-footprint setting, minimizing costs; the dough’s lightness makes customers feel healthier, so they’re apt to indulge more often; and, like with other pizza styles, Americans love the chance to customize their slices, with virtually endless topping possibilities. “With a long maturing time for the dough, 72 to 96 hours, you can prep dough in the morning and make full pies in advance,” Manzo says. “You can display them in the window, attracting customers, then warm and serve a slice in a minute. It’s fast food, but it tastes gourmet.”

In addition, Manzo notes, Roman pizza “holds” well for delivery or reheating—not always the case with Neapolitan styles, for example. “It’s almost better reheated,” he enthuses. Saieva explains the science behind the phenomenon: The highly hydrated dough helps resistance to getting soggy or chewy over time, even after a second baking.

And, Ferraro adds, simply offering a unique pizza style intrigues his customers, many of whom become Roman-style converts after their first slice. Now, about 20% of customers order the crust style above Pizza Forte’s more familiar alternatives. “I think it’s worth a try for operators to expand the menu and give people another option,” he says. “In our high-traffic area, many people stick with the traditional types like New York-style, but when people see the Roman style coming out of the oven, it definitely piques their curiosity with its appealing look. They ask questions and, thanks to the crust texture and clean, classic flavors, often end up liking it more than our other styles!”