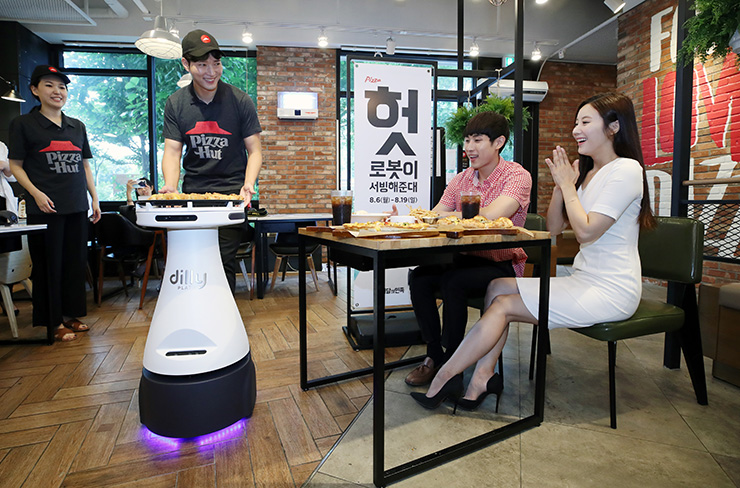 A Pizza Hut store in Seoul, South Korea, has been testing a robot waiter as part of a long-term plan to make robotic food delivery more affordable and convenient—and a heck of a lot flashier.

The robot, named Dilly Plate, is wrapping up a two-week test run. It’s the first time such technology has been used in Korea’s dining industry, Pizza Hut has said. It was developed by Woowa Brothers Corp., the South Korean startup behind a food delivery app called Baedal Minjok.

At present, Dilly Plate, which resembles a short, squat moving table, can carry up to 22 kilograms of food over short distances. But as Kim Bong-jin, Baedal Minjok’s founder and CEO, explained to the Korea Joong Ang Daily newspaper, he has far grander goals in mind for food bots. “The robotics we are interested in encompass delivery, connectivity and artificial intelligence,” Bong-jin told the paper.

Bong-jin believes robot delivery will drive down costs for consumers in South Korea. “When a robot delivers, delivery charges that normally range between 3,000 won and 4,000 won will go down to as much as several hundred won,” he said. “We are paying attention to what impact the under-1,000 won [about 89 cents] delivery charge will have on the food delivery market. Under that scenario, people will be willing to have their breakfast delivered on a regular basis.”

Related: Zume Pizza is building the pizza-making robots of the future

“I want to have robots deliver not only food but also food ingredients, products sold at convenience stores, medicine and even newspapers,” Bong-jin continued. “On their way back from delivering, robots could pick up recyclable waste from customers’ houses and throw it away.”

Travis Kalanick, the CEO of Uber, has said his company is also exploring robotic food delivery. He has predicted that humans could be eliminated from the food delivery process entirely in the near future, thanks to self-driving cars and robots that could climb stairs.

Related: 8 amazing technologies that could change the pizza business forever