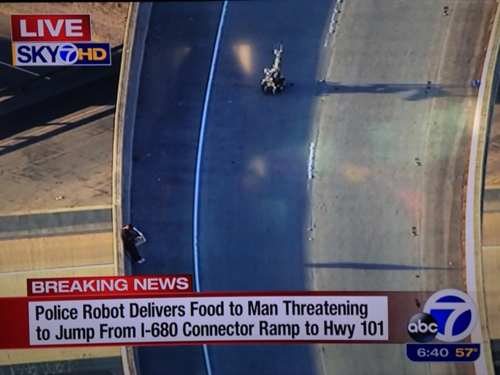 A robot carrying a slice of pizza helped persuade a man threatening to jump from a Silicon Valley freeway to turn himself in to police on April 20.

Spectrumieee.org reports the California Highway Patrol got a call about a man standing on an overpass linking Highway 680 and Highway 280 in San Jose. The man had a knife, and appeared to be ready to jump onto the freeway below. The San Jose Police Department brought in a negotiating team who quickly realized a camera-and-audio-equipped robot bearing a phone would be the safest way to talk to the man. The Northrup Grumman Remotec Andros F6A is typically used for bomb disposal instead of pizza delivery.  “[Because] delivering food is a way of encouraging someone to do something we want them to do, we sent pizza with the phone," explained  San Jose policeman Chris Sciba. In order to get the pizza, the man had to pick up the phone, and after talking to negotiators, he surrendered peacefully.

Read more about a San Jose Robocop armed with America's most persuasive food.