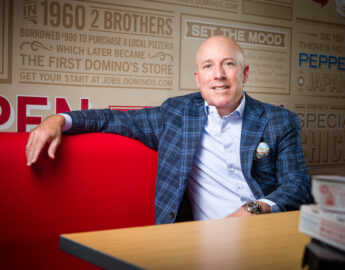 Domino’s CEO Ritch Allison, who has overseen four years of growth at the country’s No. 1 pizza chain, announced that he will be retiring on April 30, to be replaced by Russell Weiner, Domino’s current COO and president.

“Serving at Domino’s for more than a decade, including the last four years as CEO, has been the privilege of a lifetime,” Allison said in a statement. “During that time, we and our franchises have achieved tremendous growth, and today the Domino’s brand is as strong as ever. While there is much that I will remember fondly, I am most proud of the culture that ties us all together—the ‘sauce in our veins’ that makes Domino’s so special.”

Domino’s has also hired Sandeep Reddy, the former CFO of Six Flags, as its new CFO, replacing Stu Levy, who stepped down last May.

Allison announced his retirement on the same day the company said its fourth-quarter earnings for 2021 were weaker than expected. The company’s global revenue fell by 1% to $1.34 billion in the quarter ending in December, less than Wall Street’s forecast of $1.38 billion, according to a FactSet poll.

Domino’s U.S. sales were down 3% in the fourth quarter. In a conference call with investors on Tuesday, the company said some stores had to cut back on their hours due to staffing shortages.